Vamsi Mootha never wanted to be just a cardiologist or just an endocrinologist. “I like being a generalist,” he says, sitting in the lab where he spearheads a team of 21 people. And yet a generalist he is anything but. Mootha has dedicated his career to the painstaking study of a single cellular organ, or “organelle,” which allows the body to extract fuel from food. His romance with this miniature powerhouse, called the mitochondrion, began during his time as a medical student at Harvard. Since then, Mootha’s reverence has given way to an exhaustive, years-long effort to uncover the organelle’s inner workings. "It's fascinating," he says, "from a biochemical standpoint, an evolutionary standpoint, as well as from a human disease standpoint." Mootha, a senior associate member of the Broad Institute and an associate professor at Massachusetts General Hospital and Harvard Medical School, has worked together with his colleagues to bring the vast resources of genomics to bear on this tiny entity, forging critical scientific partnerships and launching collaborative projects to systematically reveal mitochondrial biology.

Indeed, the story of the mitochondrion itself is one of collaboration. Around 2 billion years ago the single-celled ancestor of complex, multicellular life, called a “proto-eukaryote,” encountered another kind of cell, a bacterium, that could do something it itself could not: namely, generate fuel in the presence of oxygen. The two parties became so dependent on one another that the proto-eukaryote eventually swallowed its companion. From this primordial mouthful, the mitochondrion was born. 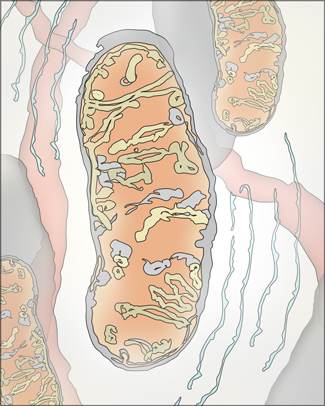 Despite these humble beginnings, modern mitochondria have evolved to carry out extensive roles. In addition to their main job of turning our food into fuel, they also control other life processes, including how and when cells die and maintaining the proper balance of electrically charged molecules, called ions, in cells. Each of these processes requires dozens of different proteins to be successfully enacted and a single glitch in any one of the genes that encode them can cause a system-wide collapse.

Mootha and his colleagues knew that in order to tease out both the fundamental biology of the organelle, as well as its dysfunctional manifestations, they would need a map of these mitochondrial proteins, known collectively as the mitochondrial proteome. As Mootha says, "the same way that the human genome sequence has been propelling so much genome biology, the mitochondrial proteome is the initial parts list [providing] a systematic framework with which to explore mitochondrial biology." But the task is not as straightforward as it may seem. The unique evolutionary history of the organelle means that only some mitochondrial proteins, thirteen to be exact, are encoded within mitochondrial DNA, an ancient leftover from the original bacterial genome of 2 billion years ago. The rest – about 1,400 in total – are encoded by genes in the nucleus, interspersed among all the other genes needed for human biology. With about 21,000 genes in the human genome, excavating the 1,400 that encode proteins native to the mitochondria might seem a daunting task to some. Mootha welcomed it.

He immediately recruited a talented computational biologist, Sarah Calvo, to the cause. Together, Calvo and Mootha developed a computational model, called Maestro, that could help predict whether a protein lived in the mitochondria. "We combined all the methods we could think of to [identify] the genes and proteins that make up this organelle," says Calvo. Steve Carr, who leads the Proteomics Platform at the Broad, helped the group with the next phase, a particularly complex and challenging task — validating these predictions. “The thing about proteomics” Carr says, “and this is important, is that the absence of a protein doesn’t mean it’s not there, you just didn’t detect it.” While their earlier experimental approach allowed Mootha and his colleagues to map just over a hundred mitochondrial proteins, new proteomic technologies allowed the team to flesh out nearly the entire mitochondrial proteome. Together with Calvo, David Pagliarini of the Mootha group and Betty Chang of the Proteomics Platform performed an exhaustive protein analysis of 14 mouse tissues to establish a list of nearly 1100 experimentally validated genes, which they named “MitoCarta.” Dr. David Thorburn of the Murdoch Children's Research Institute in Melbourne, Australia and a leader in the field of mitochondrial biology, says “[MitoCarta] is clearly the most comprehensive approach to identifying the mitochondrial proteome and a classic demonstration of the strengths of the Broad Institute, combining large-scale proteomics and cell biology with genomics and computational biology.” 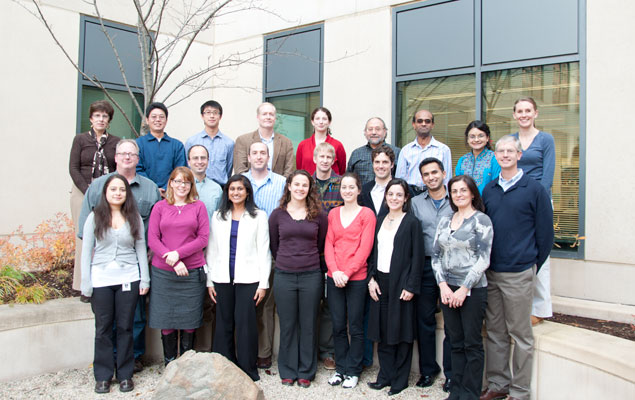 After just seven years, Mootha and his colleagues had built a framework for systematically investigating mitochondrial function in both health and disease, yielding a map that would allow them and other mitochondrial researchers to go forward into new, uncharted territory.

Navigating mitochondrial disease with MitoCarta
Developing MitoCarta was a large, ambitious project, but as Mootha says, it was just the starting point. Now that the team knew the identity of nearly 1,100 individual mitochondrial proteins, they could begin asking specific questions about each one: What does it do? What happens when it's broken? How does it work together with other components? What role might it play in human disease?

To approach these myriad new questions systematically, Mootha’s team joined forces with David Root and his colleagues in the Broad’s RNAi platform to build a library of tools that "knock down" the function of individual genes using a technique called RNA interference (RNAi). If one imagines the mitochondrial proteins as the ingredients of a cookie recipe, eliminating sugar would cause the cookies to lose their sweetness. If the role of sugar was unclear, removing it altogether would be one way to find out.

But with over a thousand mitochondrial “ingredients” identified, how does a researcher decide which ones to study first? Mootha’s team adapted a method originally developed to understand bacterial physiology to help them prioritize which mitochondrial genes to examine. In particular, they applied the method to explore a class of disorders that had previously stymied researchers. The team compared the genes of humans with those of yeast, a simpler, single-celled organism that has lost much of its mitochondrial machinery. When viewed through the lens of the yeast’s mitochondrial proteome, the difference shows up as an empty hole: a large number of human MitoCarta genes were eliminated from yeast during evolution. The researchers hypothesized that this void included not just the physical machinery, but also all the components required to put that equipment together. Using RNAi to silence the human genes one by one, they identified several that caused faulty respiratory function when broken. Furthermore, the researchers discovered that in patients with mutations in these genes, the respiratory machinery is fully intact, but the components are misassembled. It was as if a perfectly good engine was installed on a car's roof and no one knew why it wouldn't run. 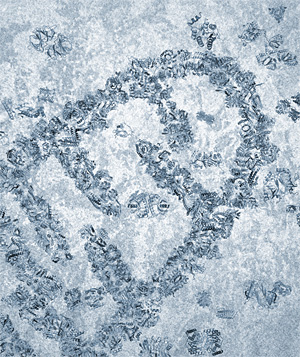 Hundreds of unique proteins come together to form an
individual mitochondrion.
Image courtesy of Broad Communications

Taking the long view: charting a course toward improved patient care
There are hundreds of other ways mitochondria can break to cause disease, many of which are not even recognized, much less understood. Mitochondrial disorders account for the largest class of rare, inherited diseases, currently estimated to affect one in 4,000 people. An improved understanding of the organelle’s fundamental biology will likely bring that number to one in a few hundred, Mootha says. He believes a collaborative approach can identify new treatments to help these patients.

When a child is born with a severe “mito” disease, life expectancy can be as low as a few days. Even adult patients, who generally have milder forms of the disease, are plagued by symptoms such as neurodegeneration, migraines, and loss of hearing and vision. Additionally, some common diseases, like type-2 diabetes, Parkinson’s disease, and even cancer, have also been associated with mitochondrial malfunctions. Because the mitochondrion’s role is so extensive, the manifestations of its dysfunction are pervasive. "If we can really understand a single genetic disorder, figure it out its molecular basis, and formulate treatment strategies, it may hold the key secret for solving the more general case as well,” Mootha says. This philosophy is the foundation for a growing portion of his work, which is dedicated to clinical research. His team is pioneering less invasive forms of diagnosis, while also searching for readily available drug therapies. Eventually, they hope to work on developing new, targeted therapies as well.

With NIH funding, Mootha's team has partnered with colleagues at Massachusetts General Hospital and Dr. Thorburn to compare the MitoCarta genes across several patient groups. Thorburn provided 60 tissue samples biopsied from young patients diagnosed with severe mito disease, while MGH provides an ongoing supply of blood samples from older patients whose symptoms may or may not be mitochondrial. Their MitoExome project, which hopes to bring next-gen sequencing closer to the clinic, aims to match hundreds of disease "phenotypes" (the physical characteristics) with their relevant “genotype,” or gene sequence. Calvo and the other computational biologists on the team are now building a model to harness the project's vast amount of data. “If you can stratify the disease by genetic mutation,” she says, “then you could hopefully predict the course or severity of the disease."

Mootha’s ultimate goal is to use MitoCarta and MitoExome sequencing to identify the key underlying factors that connect all mitochondrial diseases. In the meantime, the team is engaged in other clinical efforts that expand the scope of the group’s research. They have teamed up with the Metabolic Profiling Platform at the Broad to systematically search for biomarkers in the blood that can provide an objective readout of disease severity. They have also joined with the Broad’s Chemical Biology Platform to screen readily available, FDA-approved drugs for their availability to modulate mitochondrial function in cells that have been intentionally broken. Such a discovery could help some mito patients in the much shorter-term.

Using Maestro, MitoCarta and MitoExome sequencing, Mootha’s lab and his collaborators have already identified one dozen mitochondrial disease genes. “There is no doubt that Vamsi's achievements have placed him as one of the main thought leaders in the genetics of mitochondrial disease and in human genetics more broadly,” says Thorburn. The vision and work of Mootha and his colleagues have enabled scientists to navigate previously inaccessible terrain using a methodical approach that can be applied to other biological systems. “Ultimately,” Mootha says, “we should be able to scale our approach to the entire cell, or to an entire organism.” Perhaps he is a generalist after all.