What is Mass Spectrometry?

Mass spectrometry is an analytical tool useful for measuring the mass-to-charge ratio (m/z) of one or more molecules present in a sample.  These measurements can often be used to calculate the exact molecular weight of the sample components as well. Typically, mass spectrometers can be used to identify unknown compounds via molecular weight determination, to quantify known compounds, and to determine structure and chemical properties of molecules.

Molecules are converted to gas-phase ions so that they can be moved about and manipulated by external electric and magnetic fields. In our laboratory we use a technique called nanoelectrospray ionization, which is somewhat similar to how cars are industrially painted. This method allows for creating positively or negatively charged ions, depending on the experimental requirements.  Nanoelectrospray ionization can directly couple the outlet of a small-scale chromatography column directly to the inlet of a mass spectrometer.  The flow from the column is passed through a needle that is 10-15 um at its tip.

Once ionized, the ions are sorted and separated according to mass-to-charge (m/z) ratios. There are a number of mass analyzers currently available, each of which has trade-offs relating to speed of operation, resolution of separation, and other operational requirements.  The specific types in use at the Broad Institute are discussed in the next section.  The mass analyzer often works in concert with the ion detection system.

The separated ions are then measured and sent to a data system where the m/z ratios are stored together along with their relative abundance.  A mass spectrum is simply the m/z ratios of the ions present in a sample plotted against their intensities.  Each peak in a mass spectrum shows a component of unique m/z in the sample, and heights of the peaks connote the relative abundance of the various components in the sample. 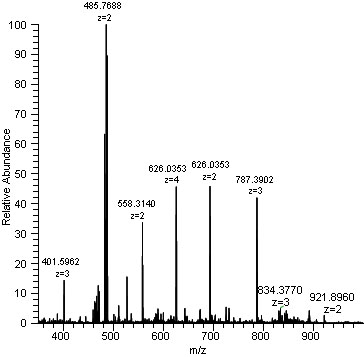 Example of a mass spectrum