Elena Cravens, a junior at Wellesley College concentrating in biological sciences, worked on the characterization of chromatin structure of short tandem repeat loci.

Genetic variants that cause changes in gene expression, such as single nucleotide polymorphisms and copy number variants, have been extensively studied in the field of genomics. Relatively little, however, is known about the patterns and functional impact of variation in short tandem repeats (STRs). STRs are another class of genetic variants consisting of short repeated motifs of 2-6bp that are ubiquitous in the genome. These loci are prone to significant modulation in the number of repeat units, potentially leading to a fast-evolving mechanism for regulation. Although disorders like Huntington’s Disease and Fragile X Syndrome have been attributed to changes in STR lengths, the effects of STR polymorphisms on gene expression are still largely unknown.

In this study, we first detected more than 2,500 STRs predicted to influence gene expression (eSTRs); we further hypothesized that eSTRs affect transcription regulation via modulating chromatin structure. To explore the association between STRs, gene expression, and chromatin, we selected three individuals whose eSTRs were within the upper and lower limits of the expression spectrum. Here we determine the effects of STR length on chromatin states through chromatin immunoprecipitation of loci in individuals with different STR alleles. We found a correlation between STR lengths and chromatin structure, suggesting a mechanism by which STRs influence gene expression.

Our findings may help to uncover a new level of gene regulation in addition to those of known genetic variants, possibly helping to explain phenotypic variation for a variety of genes regulated by STRs. 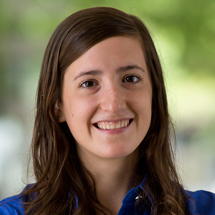 My summer at the Broad Institute was memorable, not only because of my work in lab but because of the strong intellectual community I was able to join. The people I met this summer were all genuinely passionate about learning and scientific communication. The enthusiasm is contagious and has made me excited to discover more about the world surrounding us.