Ahmed Badran remembers the first time he dabbled with the DNA of a living organism. During an 11th grade science experiment at his high school in Tucson, Arizona, Badran and his classmates delivered a new bit of DNA to E. coli bacteria growing on plates of agar. The next morning, they put the plates under an ultraviolet lamp, turned off the overhead lights, and saw the effect of the green fluorescent protein gene the students had delivered to the cells. 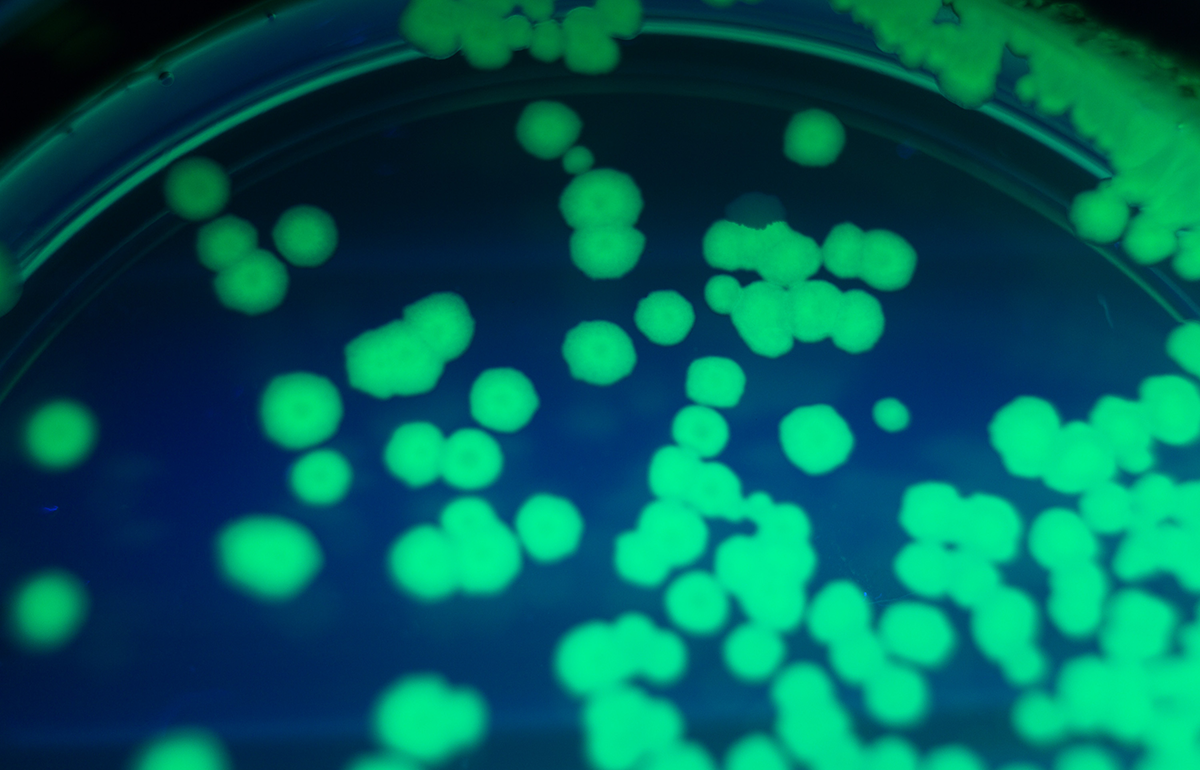 A dish of E. coli transformed with green fluorescent protein, similar to the ones that inspired Badran to pursue science.
Image courtesy of DanceWithNyanko, Creative Commons.

Before that experiment, Badran had only a textbook appreciation for the central dogma — how DNA leads to RNA and then to protein. But the luminescent bacteria hooked Badran on the thrill of observing the central dogma in action. “Seeing the colonies turn into these glowing green polka dots was amazing, and it set me on a path toward the kind of science I’m doing today,” said Badran.

After he told his science teacher how enthralled he was with the experiment, she set up a visit to the lab of Indraneel Ghosh, a researcher who worked with fluorescent proteins at the University of Arizona, just across the street from his high school. Badran was dazzled by the rainbow of proteins Ghosh used to monitor cellular activity, and how they could be combined to create molecular sensors with endless colors. “That was just mind-bogglingly cool to me,” said Badran.

He soon joined the Ghosh lab as a 16-year-old high school intern and later stayed on as a student researcher while pursuing undergraduate studies at the university. There, he first became fascinated by one of biology’s most basic functions — the building of proteins — and the molecular machine known as the ribosome that orchestrates it, making all cellular life possible. 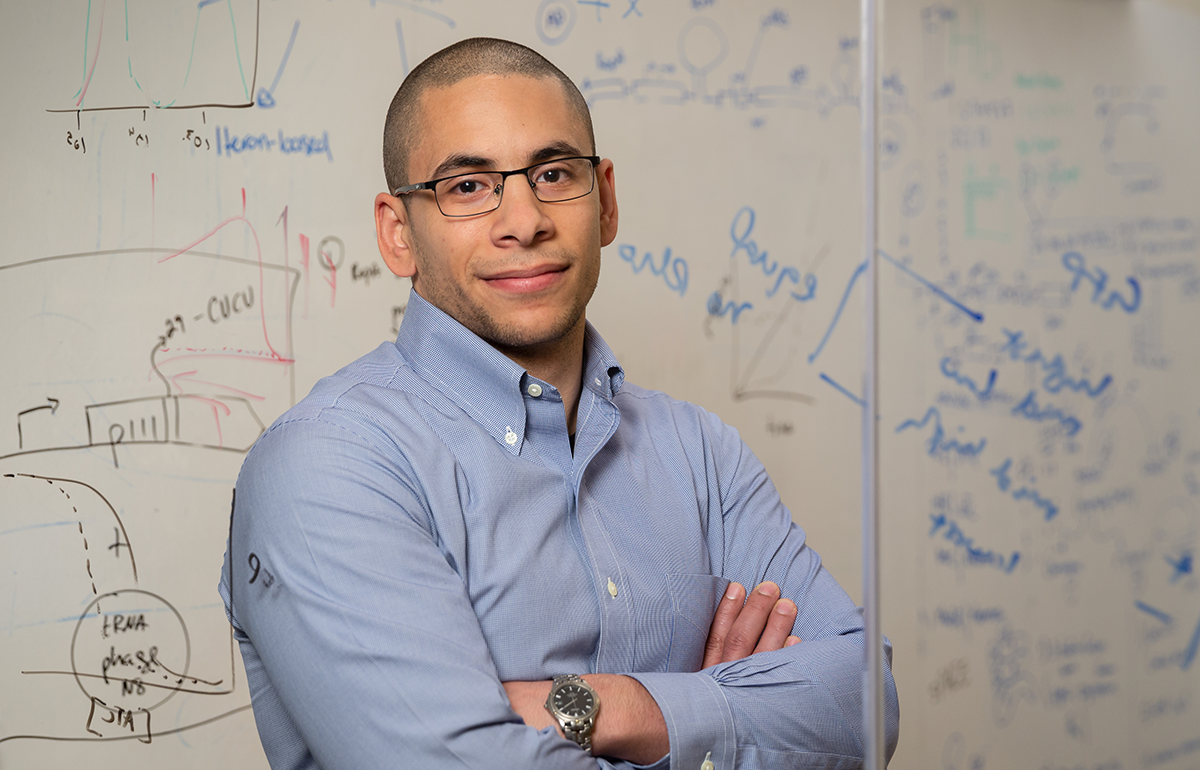 By the time he finished graduate school and arrived at the Broad Institute of MIT and Harvard as a Broad fellow in 2017, Badran had already spent a decade at the lab bench building molecular tools and systems to evolve new proteins. Now he is launching a career aimed at exploring and even rebuilding the ribosome, a colossal molecule that’s dauntingly complex to study. A bioengineer by training, Badran has a bold plan to make new types of ribosomes that augment the genetic code used by all life on Earth. Badran hopes that his new ribosomes will one day be able to assemble extraordinary proteins and be used to make better drugs, keep crops healthy, and probe biology in creative ways — if he can just convince these ancient molecules to try something new.

Badran’s lab has already made progress, creating a more efficient ribosome, pooling ribosomes from multiple organisms into one bacterium, and taking the first steps toward a ribosome that uses a new language to make proteins.

“Ahmed has always been unafraid of tackling major challenges with his characteristic creativity, rigor, and drive,” said David Liu, Badran’s graduate advisor and a professor of chemistry and chemical biology at Harvard University who is also a core member of the Broad and director of its Merkin Institute of Transformative Technologies in Healthcare. “I would have been surprised if he picked a pedestrian problem to solve."

Badran has been building things since he was a child in Tanta, Egypt, where Legos were his favorite plaything.

“I was always enthralled by toys that would let you make new toys,” said Badran. “That influenced the early stage of my research. In bioengineering, you just have to go into biology, find the Legos, and put them together,” he said.

A child of two scientists, Badran and his family moved from Egypt to the U.S. and back several times to enable his parents’ research careers, before settling in Arizona in his teens. During one of the family’s stints in Egypt, he got his first job, in his uncle’s shop assembling and repairing computers — a hobby he still enjoys today.

On visits to his mother’s botany lab in the U.S., he first learned about DNA. “In her lab, I learned that somehow by some magic, you could turn DNA into this other thing called protein, and then study what that protein does in the cell,” he said. As an astrophysicist, his father pursued science at a much larger scale, and Badran ventured several times with him to the Smithsonian’s observatory atop Mount Hopkins in Arizona. In the cold mountain air under a dark, star-filled sky, Badran marveled at the massive telescopes in this village that was built solely to support studies of stars, galaxies, and pulsars thousands of light years away.

“A lot of imagination went into how my parents designed their experiments,” he said. “Not only did I find this interesting, but that imaginative tendency came with being part of the family.”

The idea of making something that
just didn’t exist before really appealed to me.
Ahmed Badran

His parents’ dedication to their scientific passions inspired Badran, so it felt natural for him to later embark on his own career in science. “The idea of making something that just didn’t exist before really appealed to me,” he said. “I was fortunate enough to not only have parents who fostered that thought process, but also to be in situations where it was easier for someone my age to do research."

In the Ghosh lab, Badran used various fluorescent proteins to help assemble new, sensitive molecular sensors capable of signaling the presence or methylation state of nucleic acids in the cell. “Ahmed is both creative and detail-oriented, which is always a wonderful mix for success,” said Ghosh, who recalled that Badran once stayed in the lab for two days straight to run an experiment. “His curiosity is his drive.”

During his time in the Ghosh lab, Badran realized he wanted to explore the central dogma more deeply and design new tools to do so. He became fascinated with the approach of “directed evolution,” in which proteins in the lab can be encouraged to mutate and gain new, desired functions. “Near the end of my undergraduate work, it was clear that biology didn’t always have the parts that we wanted, or if they existed, we didn’t know about them,” he said. “With directed evolution, if you can’t find the Lego pieces you need, then you make them yourself.”

While searching for a graduate program, Badran learned of the work in David Liu’s lab, which had pioneered a fast way of making innovative proteins through a directed evolution technique known as phage-assisted continuous evolution (PACE). With PACE, researchers harness selective pressure and fast-evolving viruses called bacteriophage to quickly produce new proteins with desired features, such as enzymes that catalyze a biochemical reaction faster than existing ones.

After meeting with Liu, Badran brushed off his aversion to New England winters and moved to Cambridge, Massachusetts, to join the lab. While earning his Ph.D., he helped transition PACE from a new method capable of evolving mostly just RNA polymerases into a highly general method that can now evolve many classes of proteins, including proteins that can kill agricultural pests while avoiding resistance.

“Ahmed was an exceptional group member, so much so that my current lab members still occasionally seek him for his expertise about certain subjects,” Liu said.

MOTHER OF ALL MOLECULES

While contemplating his post-graduate life, Badran found himself once again pondering the central dogma. As a student researcher, he’d seen the emergence of new tools to manipulate two of its components — DNA and RNA — but not many to modify proteins. “That’s in part because the ribosome is unwieldy and not well understood,” he said.

The ribosome has earned the nickname “mother of all molecules” for good reason. Three RNA molecules and more than 50 proteins come together to make this biological machine, one of the largest complexes in the cell. The ribosome is so essential to cellular life that probing it without killing the cell is incredibly difficult. In fact, a colleague once advised Badran that he would never get tenure by studying the ribosome. Unfazed by this warning, and with the fields of directed evolution and synthetic biology coming into their own, Badran felt the time was ripe to tinker with the cell’s protein factory.

So Badran looked beyond the usual next step of postdoctoral research. The chance to start his own lab, without the teaching responsibilities of academic research and with more time at the bench, appealed to him. As a Broad Fellow for the past few years, Badran has been free to focus on high-risk research aimed at understanding the ribosome well enough to give it new capabilities, such as building proteins that don’t exist in nature.

To do this, Badran will need to get the ribosome to learn a new language. RNA, ribosomes, and proteins communicate using three-letter “words” called codons, which tell the ribosome which amino acids to string together to form a protein. With four letters of the DNA alphabet – A, T, C, and G – there are 64 possible 3-letter codons that collectively encode for the 20 standard amino acids. While 20 building blocks are plenty for naturally occurring proteins, Badran wants to build novel proteins that incorporate non-standard or engineered amino acids that have been generated by other researchers. To do so, he’ll need a ribosome that can read more than just 64 codons.

Badran and members of his lab are using directed evolution to engineer new ribosomal parts and convince the complex to read four-letter words, which would increase the number of possible codons from 64 to 256. Some of these “quadruplet codons” would encode the 20 natural amino acids, but the rest would each alert the ribosomal complex to add one of dozens of synthetic amino acids, resulting in novel proteins with potentially useful properties. Techniques already exist to incorporate a few additional non-standard amino acids into a protein by altering one of the 64 triplet codons, but Badran’s quadruplet approach could add many different kinds of non-standard amino acids into a single protein.

To help reach his goals, Badran has developed what’s known as an “orthogonal translation” system, in which a cell contains both its native ribosomal machinery and a secondary, synthesized ribosome that can only make one protein. The system allows him to tinker with the secondary ribosome without disturbing the original one and killing the cell. This allows him to probe how the ribosomal complex first evolved, what its various components do, and what parts are essential to building proteins.

Badran is also using directed evolution to generate variations of ribosomal parts and transfer RNA molecules, which work with the ribosome to help build proteins. He is using the secondary ribosome to test the capabilities of the new parts he’s building, which he hopes will help the ribosome learn to read quadruplet codons and create novel proteins.

Badran’s young lab has been busy. They’ve created ribosomes that translate mRNA into proteins more quickly than their natural counterparts, which could help produce biologic medicines more efficiently. They’ve engineered E. coli to host a pool of ribosomes from different microorganisms, which may help scientists develop drugs that target certain pathogens more selectively. They’re also making progress towards a quadruplet-codon system, by deciphering which four-letter codons would correspond to which amino acids.

Badran and his colleagues hope their efforts to reimagine the ribosome will help them learn about the origins of this ancient molecular machine. “I want to create methods that allow us to understand things that exist, and then evolve new tools to study them and perhaps even probe the very limits of biology,” Badran said. “Discovering something that’s been just outside the reach of scientists is what really excites me.”