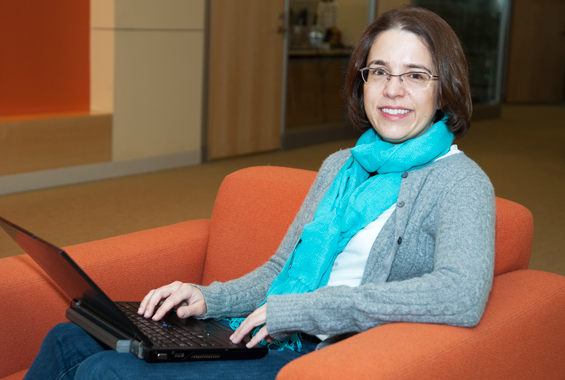 One winter, the bats of Albany, NY disappeared. When researchers visited their caves, they found the bodies of little brown bats on the cave floors and just outside the entrances -- their noses, wings, and ears dappled with a white coating. More than 80 percent of the bats hibernating in these affected caves were dead by the end of that first winter.

Four years later, scientists identified the organism responsible for killing the bats, but the devastating disease, known as white nose syndrome (WNS), has spread. Geomyces destructansis a fungus likely causing WNS, a disease that has decimated bat populations in the northeastern United States and appears to be spreading each winter. Little is known about the fungus that causes WNS, but Fungal Genomics group leader Christina Cuomo and her colleagues hope to change that.

As part of a team with ecologists and fungal biologists, Cuomo and her fellow researchers at the Broad want to lay a foundation to study and hopefully combat this pathogen. Bats play an important role in the ecosystem, consuming vast amounts of insects (up to half their bodyweight in one night). As bat populations wither, insects — and insect-borne diseases — could rise. Studying this fungus may also serve as a model for understanding a related fungus called Geomyces pannorum, an emerging pathogen that causes skin infections in people.

One fungus can impact an entire ecosystem

Unlike yeast and other fungi that have been studied in the laboratory for decades, the white nose fungus was only described in 2009, and very little is known about its genes. Broad researchers are collaborating with USGS National Wildlife Health Center microbiologist David Blehert who isolated the fungus from bats and has shared genomic DNA with the Broad for sequencing. Cuomo and her team hope that the fungus’s genome will give researchers their first clues about how it infects bats and how it became so menacing. 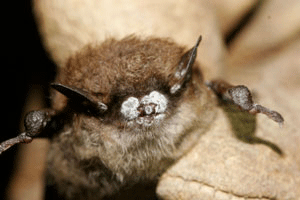 “The genome should rapidly advance our understanding of this pathogen, but is only a first look,” said Cuomo. “The hope is that the genome will be a platform to get people interested in working on this problem and thinking about ways to try to combat this fungus. Treating an infectious outbreak in nature is complicated, as the players are not only the bats and the fungus but the rest of the ecosystem, which includes other fungi you would not want to wipe out.”

The Fungal Genome Initiative focuses on sequencing pathogens of medical or agricultural importance as well as some model systems. This work has progressed from sequencing individual species, to groups of related species such as Aspergillus(a type of mold) and Candida (a type of yeast), to multiple strains of the same species in order to better understand the genetic differences between them. As the group leader for fungal genomics, Cuomo develops projects with collaborators, writes grants and white papers, and then works with several Broad groups to get the sequence and additional information for each genome. Her group also collaborates with the Genome Sequencing Platform, in addition to groups within the program that assemble the short DNA sequences to recreate the genome and identify genes and other elements; often, early discoveries about genomes emerge from such work.

Together with outside collaborators, FGI researchers then work to analyze the genomes in the context of the biological questions important for each organism.  “I really enjoy the opportunity to learn about so many different systems and to try to learn new things from each of the genomes. I also feel that we’re making an important contribution that can help a lot of researchers, by generating genomic resources and making them openly available,” she said. “A lot of people build off of the things we’re doing or bring it into their own work.”

Cuomo and Broad computational biologist Sharda Sakthikumar are currently working on another animal pathogen, a chytrid fungus which infects frogs and other amphibians. Cuomo’s team is currently analyzing the genome and sharing the data they’ve generated with the scientific community. “We’re working with collaborators who have collected the chytrid fungus around the world to develop a genotyping platform to establish the relationships between these worldwide strains. Also, our genome analysis suggests that the cell wall, a primary target of anti-fungal drugs, is different in the chytrid than in other fungi, so developing new anti-fungal drugs may be very important to treat infections,” said Cuomo.

Unstudied parts of the fungal kingdom

Having a basic understanding of how the genome of a particular fungus is put together can be critical to combating it. There are many anti-fungal drugs available, but if a fungus doesn’t have a particular drug target – say, a protein involved in the cell wall (a protective layer that surrounds many fungal cells) – the drug will have no effect. In the case of the chytrid, core fungal cell wall genes appear to be missing, and there is an increase in the number of other cell wall proteins. This information could help scientists determine the right course of action in the fight against the fungus.

The chytrid fungus affects frogs from all over the world, including the red-eyed tree frog.
Image courtesy of
wikipedia/Mahdi Karim

“These two epidemic fungi emerged from parts of the tree that did not contain many other pathogens and that we hadn’t sequenced before. And as they only emerged recently, not much is known about them and they are not easily manipulated experimentally, so analyzing the genome will be a major advance for each,” said Cuomo. “The frog and bat fungi are in such unstudied parts of the fungal kingdom, that at a basic level we need to understand what makes them work.”

Cuomo has been at the Broad Institute since 2002. She attended graduate school in genetics at Harvard Medical School where her research focused on immunology, but working with yeast appealed to her and she pursued her post-doc in Andrew Murray’s lab at Harvard. With a growing interest in computational work, Cuomo was excited when she heard about the Fungal Genome Initiative at the Broad Institute, still in its initial planning stages, when she joined the Broad. Cuomo spent a year working on the Human Genome Project managing the Closure group, helping to complete the paths of chromosomes and learning about genome analysis.

A vast world of microorganisms

Cuomo team works along side the groups at the Broad that study viruses and bacteria, and the interplay between different kinds of microbes recently inspired a new collaboration. Cuomo will be teaming up with Broad researchers working on the Human Microbiome Project (HMP) – an endeavor to catalog all of the microbes living on and in the human body. While to date the HMP has mainly surveyed bacteria, fungi such as Candida and Aspergillus are commonly found clinically, and fungal-bacterial interactions are important to consider for critically ill patients. Understanding the microbial community and the complex interplay between microbe neighbors could have an impact on human health and treatment for disease. 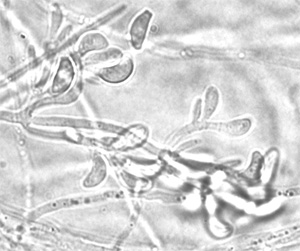 Cuomo is involved in several other FGI projects that target a variety of important fungi. These include a fungus that is wiping out wheat crops in Africa, dangerous fungi that can infect the lungs, as well as a group of pathogens that include the fungus that causes athlete’s foot as well as benign fungi that live in the soil. Looking at the genomic differences between species could help scientists understand how certain fungi become uniquely suited to a particular host.

“We framed some of these projects to use comparative genomics to identify differences that could contribute to host specificity and pathogenesis, ” said Cuomo.

This might be especially helpful in shedding light on the mystery surrounding the deaths of the bats. Right now, little is known about the white fungus that grows on the muzzles, ears, and wing membranes of the bats; the closest fungal species that has been sequenced is a plant pathogen. What is known is that bats can carry the white nose fungus throughout the warm seasons without succumbing to WNS. But during their hibernation cycle, the fungus becomes a menace. Scientists hypothesize that something about the fungal infection wakes up the bats during hibernation, throwing off the bats’ delicate energy balance and leading to starvation. The cause of this waking – whether it’s a direct consequence of the infection or a secondary effect — and how the fungus evades the bats’ immune system and lies dormant during the summer remain unknown.

These are some of the questions that Cuomo hopes her research will allow ecologists to pursue. “We need to move quickly, as WNS appears to still be spreading.  Hopefully, the genome will jump start investigations into this fungus,” she said.

To view other Projects visit the Project Spotlight Archives.