The Altshuler/Daly lab in the program for Medical and Population Genetics has been instrumental in making genome-wide association studies possible. Their efforts have led to the identification of many genomic regions (loci) that impact disease susceptibility. As a new post-doc in this laboratory, my work will focus on the functional follow-up of loci that influence Type 2 Diabetes (T2D) susceptibility. Specifically, I am exploring methods to localize the original association signal to a causal gene, discover the functional relevance of the gene and place the gene into a cellular network.

The first part of my project is to identify mutations in genes flanking an association signal in a given locus. By re-sequencing exons in hundreds of patients and controls we have identified novel variation. I will perform association tests on these novel variants to determine which gene or genes are enriched with variants associated with disease risk. These tests will likely implicate the gene in the region that is associated with disease.

Once the gene is known, I will develop functional assays to determine how mutations in that gene alter its molecular function. Major defects in T2D are impaired insulin secretion and inability of tissues to respond to insulin. I will test implicated genes in assays that distinguish between these possibilities in different cellular models.

Ultimately, this work will define a framework for quick and efficient identification of causal genes and determination of how these genes contribute to disease. Eventually, the findings of these studies will increase our knowledge of T2D pathogenesis, generate diagnostic tools and create new drug targets. 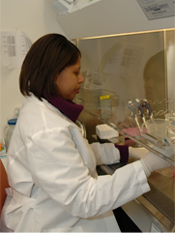 "My time as a postdoc at the Broad has been inspirational. I am surrounded by great scientists who strive to achieve what many may think impossible. This environment drives me to reach beyond what I thought myself capable. As a result, I feel myself growing into a better, more productive scientist every day."