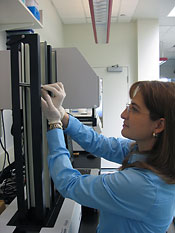 At the Broad Institute, I was a member of the neuropsychiatric genetics group — a talented team of scientists in the program for Medical and Population Genetics who are interested in understanding the genetic basis for psychiatric disorders. Our group is involved in a number of projects dealing with both human DNA association studies and mouse models of human psychiatric disease. As a member of the group, I worked on the developmentof computational algorithms and experimental techniques to study the genetic basis for bipolar disorder and schizophrenia.

To investigate the genetic basis of bipolar disorder, I wrote algorithms in Matlab to analyze over 100,000 single nucleotidepolymorphisms (SNPs), across the genome, in a set of patients and controls. The algorithms look for loss of heterozygosity (LOH) and null genotype calls to identify genomic regions with deletions. The algorithms also perform statistical analysis to identify significant correlations between LOH and the disease state. Regions with significant correlations are further investigated by looking at DNAcopy number changes in those regions.

To study the genetic basis of schizophrenia, I was involved in a project whose goal is to create a behavioral mouse model for a known endophenotype of schizophrenia, prepulse inhibtion (PPI). As a member of this project, I helped determine the experimental techniques needed to stereotaxically deliver short-hairpin double-stranded ribonucleotides (shRNAs) against candidate genes for PPI. I also performed several preliminary experiments to determine the appropriate stereotaxic coordinates to reach the ventricle and the appropriate surgical techniques for survival surgery.

Along with the above projects, I also participated in a smaller project that involved the genotyping of several SNPs, within a gene of interest to bipolar disorder, in over 2,000 individuals. My next postdoctoral position will be with the Miami Project to Cure Paralysis at the University of Miami Medical School. At this center, I hope to combine my training in engineering, neurophysiology and genetics to help restore motor function in individuals with spinal chord injury.