Tendai Chisowa, a senior biology and chemistry major at Williams College, researched the modulation of the schizophrenia associated gene, GRIA1, by the CUL3 ubiquitin ligase.

Many seemingly disparate genes have been associated with risk for schizophrenia (SCZ). A major effort is underway to understand how these seemingly unrelated genes might function in common biochemical pathways. Among the SCZ (and also autism (ASD)) implicated genes are a set of CULLIN-RING E3 ligase components. CULLIN-RING ligases are multi-protein units within the ubiquitin proteasome system that regulate cellular processes including neuron development, synaptic function, signal transduction, and protein stability. They consist of a group of common scaffolds called CULLINS that bind proteins called substrate adaptors, which recruit substrates for ubiquitination. The CULLIN, CUL3, and the CULLIN adaptor protein, KCTD13, are both implicated in schizophrenia and autism spectrum disorders. To identify biochemical connections among the SCZ- and ASD-associated genes, we hypothesized that this CUL3 KCTD13 E3 ligase may regulate other protein products of SCZ- and ASD-associated genes. Identification and confirmation of these SCZ/ASD-associated, ubiquitinated gene products would provide the foundation for a set of biochemical pathways associated with SCZ and ASD and targets for novel therapeutic development. Using a cellular protein stability assay in HEK cells, we screened for schizophrenia-associated genes that are CULLIN and proteasome dependent and that can be ubiquitinated by KCTD13. Preliminary results from this assay suggest the gene GRIA1, which is found in a schizophrenia-associated locus, is regulated by the ubiquitin proteasome system. We show that GRIA1 levels are increased in the presence of the proteasome inhibitor bortezomib and decreased when treated with the CULLIN inhibitor MLN4924. These data imply that the GRIA1 protein may be degraded by the proteasome upon ubiquitination and indirectly modulated by a CULLIN E3 ligase. We suggest a model for GRIA1 regulation by a CUL3 E3 ligase. Identification of schizophrenia-associated proteins as putative targets of the ubiquitin-proteasome system may aid the development of novel therapeutic strategies to treat schizophrenia.

PROJECT: The modulation of a glutamate receptor, GRIA1, by a schizophrenia associated ubiquitin ligase 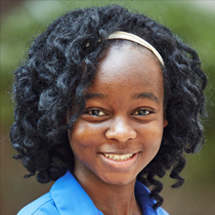 If you are seeking a challenging, exciting, and fruitful research experience, then look no further than SRPG. After this program, I emerged a more critical thinker, equipped to enter the professional science world confidently. Working and speaking with top scientists helped me to realize that they had experienced my struggles and succeeded regardless. The mentors truly care about the students and expect us to put our best foot forward. I look forward to sharing what I learned with aspiring, young scientists. My only regret is that I didn’t have more time.