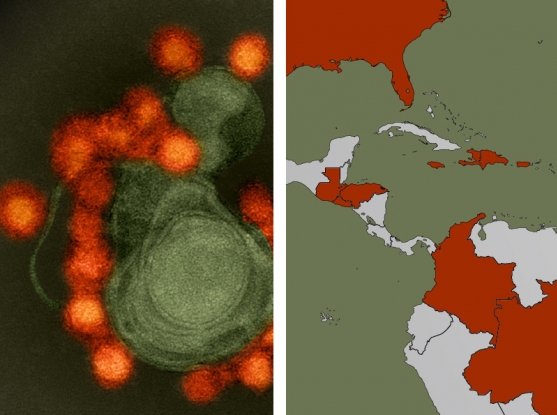 Analysis of the largest collection of Zika genomes to date reveals the trajectory and evolution of the virus as it spread throughout the Americas, with implications for future surveillance efforts.

The Zika virus circulated in many regions of the Americas for several months before cases of infection were detected, according to new data from an international research team from the Broad Institute of MIT and Harvard and several collaborating institutions.*

These findings, revealed today in Nature in a paper led by Pardis Sabeti of the Broad Institute and Harvard University, arise from an analysis of 174 Zika virus genomes — including the largest collection of new Zika virus genomes to date — sequenced from patient and mosquito samples collected in 11 affected countries and territories.

The genomic data allowed the research team to reconstruct for the first time the spread of the virus across South and Central America, the Caribbean, and into the southern United States.

In many of these regions, the virus circulated for months before local cases of infection were detected. Sabeti and colleagues’ analysis suggested that Zika was circulating in Brazil around February 2014, a year before that nation’s first confirmed infections were reported. Similarly, the virus appears to have arrived in Colombia, Honduras, Puerto Rico, and elsewhere in the Caribbean from 4.5 to 9 months before the first confirmed local infections, highlighting the importance of having sensitive and specific diagnostic tools early in an outbreak. 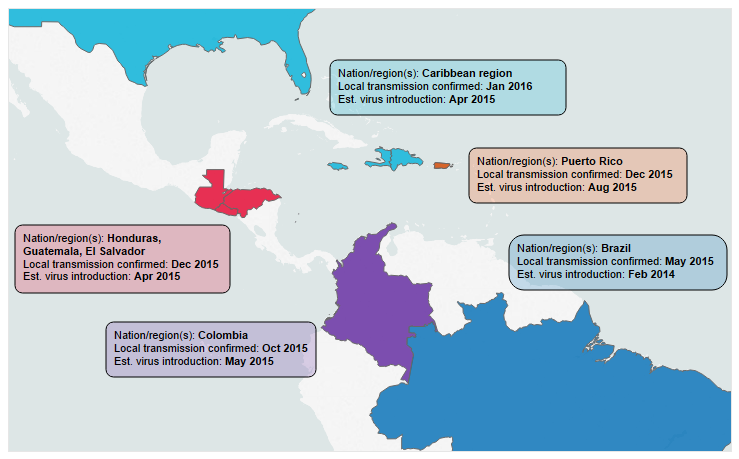 By analyzing genomes generated as part of the study, researchers confirmed that the Zika virus was present in affected countries well before the first confirmed cases were detected. (Credit: Tom Ulrich, Broad Communications)

These results appear only now, months after the peak of the outbreak, because sequencing Zika virus has proved to be challenging, particularly directly from patient samples. The difficulty arises because Zika virus is typically present at very low levels in patients and disappears quickly. As a result, very few Zika genomes had been generated prior to this study, leaving researchers with little basis for understanding how the virus is spreading and evolving.

To address this lack of data, the team developed new laboratory and analytical methods for capturing robust Zika genomic data, and applied them to samples collected in partnership with collaborators in Brazil, Colombia, the Dominican Republic, Honduras, Jamaica, Puerto Rico, Massachusetts, and Florida to generate 110 new genomes for this study. The team combined those genomes with an additional 64 available in GenBank and in one of the study’s two companion papers to carry out their analysis.

“We knew it was important to understand the viral populations driving the epidemic, which motivated us to tackle the challenges of sequencing Zika,” said study co-first author Hayden Metsky, a graduate student in the Sabeti lab. “Because the data we generated capture the geographic diversity of the virus across the Americas, they provide an opportunity to trace how and when the virus spread. Our data and findings will also support development of more effective molecular diagnostic tests, as well as improved public health surveillance tools.”

The work also highlights the importance of quickly creating trusted partnerships between researchers and across institutions and regions, and of sharing data openly during outbreaks.

“This collaboration has been about each partner sharing their unique resources and expertise — samples, protocols, analyses, insights — to help understand and fight Zika,” said Thiago Moreno L. Souza, a study co-senior author and senior research scientist at Fundação Oswaldo Cruz in Rio de Janiero, Brazil. “Sharing the data widely for the same end goal was an obvious extension of that ethos.”

The study was published together with two companion papers, one by Kristian Andersen from the Scripps Research Institute and colleagues examining Zika’s introduction into Florida, and the other by Oliver Pybus at the University of Oxford and colleagues examining the virus’s establishment and early spread within and beyond northeastern Brazil. All three teams committed to sharing data and ideas freely amongst themselves and to release their findings cooperatively and quickly.

“Collectively our goal was to capture as complete a picture of the genetic underpinnings of the epidemic in the Americas as we could. Working together was critical to reaching that goal ,” said study co-senior author Bronwyn MacInnis, associate director of malaria and viral genomics in the Broad’s Infectious Disease and Microbiome Program. “Instead of competing for publication, we wanted our papers to leverage each other and reflect our commitment to the greater good.”

Zika remains a significant public health threat in affected countries and regions, highlighting the need for continued surveillance and research on the virus. According to MacInnis, the epidemic holds lessons about the role genomics can play in identifying and tracking emerging outbreaks early, before widespread infection occurs.

“Genomics allowed us to reconstruct how the virus traveled and changed across the epidemic — which also means that genomics could have helped detect it much earlier,” she said. “We were way behind the curve on Zika. We need to be well ahead of the next emerging viral threat, and genomics can have a role in achieving this.”

Support for this study was provided by Marc and Lynne Benioff, the National Institute of Allergy and Infectious Diseases, and other sources. Pardis Sabeti is an Investigator with the Howard Hughes Medical Institute.

*The work was and continues to be part of a collaboration across nations. Those currently involved include the following investigators, together with their teams and collaborators:

Joshua Anzinger, The University of the West Indies, Jamaica