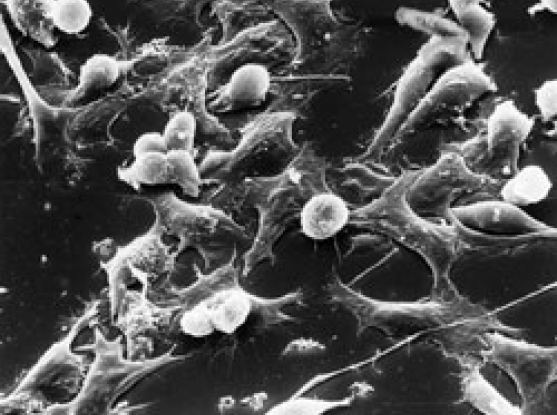 Every cell in the human body contains an identical genome — the collection of genes and DNA that direct the body's creation, development and growth. But the human body contains many different cell types: skin cells, immune cells, muscle cells, etc. If the genome is the same, why are all these cells different? Evidence is increasingly pointing to the epigenome — a set of proteins and chemical modifications that decorate the DNA sequence — as a driving factor behind this differentiation process.

"The reason is that the genome is organized, regulated and controlled differently in these different cells," explains Bradley Bernstein, associate professor of pathology at Massachusetts General Hospital (MGH) and an associate member at the Broad Institute. "Epigenomic influences, such as varying chromatin structures, can control and maintain a cell's properties by keeping some genes on and others off." Chromatin is a complex of the DNA, RNA, and protein that makes up chromosomes.

Researchers at MGH and the Broad Institute have developed technologies to study the epigenome of a cell, and in particular a type of epigenetic decoration known as a ‘chromatin mark'. Chromatin marks are not direct chemical modifications of the DNA itself, but instead modify the chromatin proteins around which the DNA is wound. In the past, the researchers have applied these tools to map chromatin marks in embryonic stem cells (ESCs) and other normal cell types.

This month, researchers from the Broad and MGH published the results of the first ever genome-wide chromatin mark map of a cancer cell. "In this study, we applied analytical tools previously used to examine normal stem cells and tissues to directly characterize the epigenome of a human tumor," explains Bernstein. The cells they studied came from Wilms tumor, the most common pediatric kidney cancer.

After comparing the chromatin profiles of normal ESCs with Wilms tumor cells, they concluded that Wilms tumor results from developmentally derailed kidney stem cells. Their results are published in the June 4 issue of Cell Stem Cell.

Wilms tumor cells represent an excellent model for studying epigenetic influences, like chromatin structure and transcription regulators. That is because this form of cancer is caused by relatively few gene mutations compared to other forms of the disease. Rivera and Daniel Haber, Director of the MGH Cancer Center, had previously discovered a novel tumor suppressor gene, WTX, in Wilms tumor. "But there was no smoking gun oncogene that we could identify as a great pathway to look at therapeutically," says Rivera.

"That suggested to us that something in the epigenome strongly influences Wilms tumor development," explains Bernstein.

By comparing Wilms tumor cells with various other cell types, the team was able to reconstruct the sequence of events that lead to the formation of the tumor. Their results suggest that Wilms tumor shares many of the pathways that are active in kidney stem cells but that they become developmentally derailed, and cancer is the tragic consequence. Their findings also help explain why Wilms tumor only strikes very young children — the typical age at diagnosis is three years. The likely reason is that beyond this age, the lingering stem cells that are the tumor's cell of origin are largely depleted.

"Our epigenome analysis suggests that Wilms tumor is very closely related to normal in vivo progenitors, or stem cells, in the renal lineage that are normally present in very young children," says co-first author Miguel Rivera, an assistant professor of pathology at MGH and an associate member at the Broad Institute. "We speculate that normal renal stem cells that already have the right epigenomic makeup represent the cell of origin in this disease," concludes Bernstein.

One type of mark the team studied is called K4. K4 is a type of chromatin modification associated with gene activation. Researchers found that like renal stem cells, the Wilms tumor cells have high levels of K4-marked genes that are highly enriched for renal developmental regulators. Yet of the 100 genes identified in Wilms tumor, only 26 were already known to be required for kidney development. "That leaves about 75 new genes that may also be part of a renal developmental network," says co-first author Aviva Presser-Aiden, a postdoctoral fellow at the Broad.

The Broad researchers also searched for genes with the K27 chromatin mark, which suggests that a gene is turned off. "We realized that there were many terminal differentiation markers in kidney development — genes that make a cell become a fully differentiated, healthy adult kidney cell — that were inactive for some reason in the tumor," explains Presser-Aiden. "This suggested that the tumor is getting stuck before it is fully differentiated."

The researchers explain that chromatin analysis provided the means to identify new genes that are likely to be important in this disease and to pinpoint specific blocks in developmental pathways.

"This paper describes a model for studying pediatric cancers in general," says Bernstein. Adds Rivera, "This is a very systematic way of finding out which developmental pathways are players in these tumors."

By applying these epigenomic analysis tools, researchers can obtain a very high-resolution picture of cellular state, including information about gene organization, transcriptional state, and potential. "Going forward, we should learn much more about epigenetic landscapes and defects in cancer as increasing numbers of normal cell models and tumors are characterized," speculates Bernstein. It may also hold promise in other fields, such as regenerative medicine, as researchers characterize stem cells that have been differentiated or grown in the lab with the goal of therapeutic replacement.