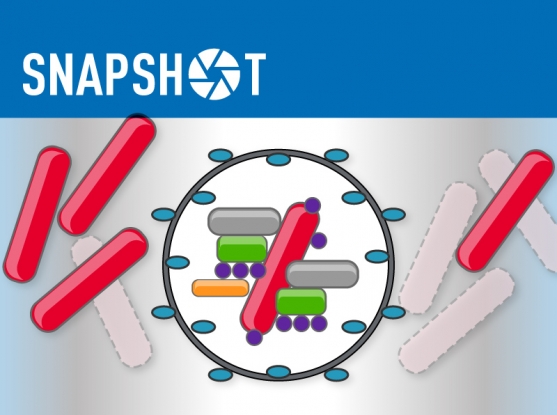 To better understand natural cellular defenses as a potential route to drug development, Broad researchers map out the E3 ubiquitin ligases that are critical in fighting bacteria.

Cells have several tools for fending off invading bacteria, but one of their front-line defenses is a process called antibacterial autophagy. When bacteria enter the cell, they are sensed and tagged with molecules called ubiquitin, which mark the bacteria for destruction. If genetic mutations in the cell hobble this process, cells may have trouble defending themselves against microbes and become more susceptible to disease.

Proteins called E3 ligases are responsible for, among other things, decorating invading bacteria with ubiquitin early in autophagy. In a new Cell Reports paper, a team of researchers led by Broad institute member Ramnik Xavier, Kara Lassen, and Massachusetts General Hospital’s Robert Heath screened all 617 known E3 ligases to determine which are critical to autophagy and how they contribute to the process. The aim was to inform searches for small molecules that could boost the effectiveness of autophagy or treat its disruption, since the process is critical for maintaining cellular health and balance with the microbiome.

When the researchers experimentally removed the function of individual E3 ubiquitin ligases in epithelial cells, they found 48 responsible for marking intracellular bacteria. The team selected one, called RNF166, for further analysis based on its close interaction with other proteins that sense the bacteria’s ubiquitin adornments.

Xavier and his colleagues exposed the cells to Salmonella, Shigella, and Listeria bacteria to determine if RNF166’s activity was microbe-specific, and found that the ligase was better tuned to fight Shigella and Listeria infections. The researchers suspect that other E3 ligases also target specific substrates, with some redundancy in the system.

Research into E3 ligases extends beyond infectious disease to cancer and other areas as well. The team hopes that the new detailed catalog of autophagy-related E3 ligases and their mechanisms will be a useful resource for other investigators studying the process as a gateway for treating illness.