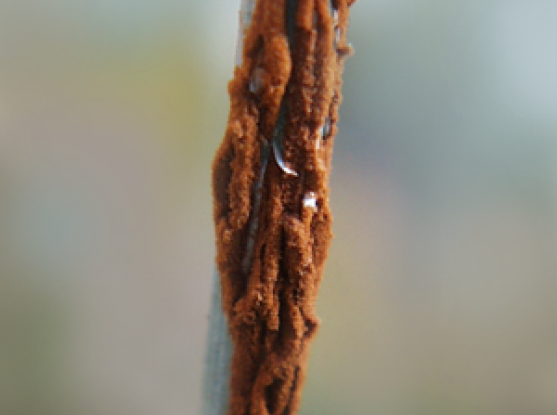 A fact of plant life is that fungal infection often descends on its host, in the process destroying the plant while the fungus thrives. This is true for many plants commonly used in food production – so-called cereal plants like wheat and barley. In a paper published May 2 in the early online edition of Proceedings of the National Academy of Sciences (PNAS), researchers including those from the Broad Institute of MIT and Harvard, provided detailed genetic information for two types of rust fungi that infect wheat and barley and poplar trees. They were looking for clues explaining how each of the fungi infects and thrives on its host.

One of the pathogens, Puccinia graminis f. sp. tritici, is a highly-specific fungus that infects the wheat plant stem. “Our part of the project was to look at this virulent P. graminis fungus that causes stem rust disease in wheat,” says co-author Christina Cuomo, Group Leader, Fungal Genome Sequencing and Analysis at the Broad Institute. These fungi are termed rusts as they produce characteristic rust-colored spores on the wheat stem. For this effort, Cuomo worked in collaboration with Les Szabo at the University of Minnesota and the Cereal Disease Laboratory of the U.S Department of Agriculture, who specializes in rust fungi, as well as other researchers.

The PNAS paper also includes a genomic analysis of another plant fungus, Melampsora larici-populina, which causes poplar leaf rust disease. This work was completed by a team at the U.S. Department of Energy Joint Genome Institute and researchers in France at the Institut National de la Recherche Agronomique, Centre National de la Recherche Scientifique, and the Universities of Nancy and Aix-Marseille.

The P. graminis work is part of the Broad’s Fungal Genome Initiative (FGI), an international collaboration whose mission is to produce and analyze sequence data from fungal organisms that are important to medicine, agriculture and industry.

The wheat rust and poplar tree rust fungal pathogens are both obligate biotrophs meaning they cannot be grown in culture. They require a living host to grow on, extracting nutrients from living plant tissue, and can devastate host wheat plants when new virulent strains emerge. Outbreaks in the United States dating back to the 1940s and 50s destroyed large wheat fields. (Read more about wheat rust disease here.) Today, Ug99, a particularly virulent strain of the fungus, has spread through northern Africa from its Ugandan origin making its way to the Middle East towards large wheat-growing areas in India and Pakistan, threatening wheat-based food sources.

“In contrast to the other plant pathogens we have examined, P. graminis is different in being a biotroph,” says Cuomo. “With Melampsora it provides the first window into the genomes of rust fungi, which are found in a different part of the fungal kingdom than more commonly studied yeast and filamentous fungi.” (Visit the Broad’s Puccinia Group Database to learn more about Puccinia.)

The Broad team sequenced the genome of P. graminis, and the comparison to M. larici-populina and other fungi uncovered clues to its pathogenicity and common properties shared by both biotrophs. As recently uncovered in more distantly related biotrophs, P. graminis has lost genes involved in nitrate and sulfur assimilation, two metabolic processes essential for life.

When researchers analyzed gene content of P. graminis and compared it to other fungal genomes a few notable clues surfaced. “At 89 megabases, the genome for P. graminis is much larger than the typical fungal genome of about 30-40 megabases,” explains Cuomo. Specifically, the P. graminis genome appears to have many more genes that are not found in other fungal species. They determined that many of these genes encode for secreted proteins the fungus could use to overcome the defenses of the wheat host. In future work, the team especially hopes to identify how the pathogen so nimbly overcomes the wheat plant’s defenses.

“The much larger goal of this type of work is to have an impact on sustainable agriculture, to ultimately help develop wheat lines that are resistant to infection by aggressive P. graminis strains,” says Cuomo. But that is a big challenge since the P. graminis fungi evolve rapidly. “Epidemics like Ug99 will continue to challenge wheat production as new virulence appears to be emerging frequently,” she adds.

Looking ahead, the Broad team plans on sequencing the genome of the Ug99 strain as well as others related to it to identify genetic changes that could be responsible for the shifts in virulence toward some of today’s wheat lines. Adds Cuomo, “These fungi have overcome major resistance strategies in wheat and the goal of many groups is to understand how.” As part of the wheat rust disease effort of the FGI, Broad scientists will broaden their scope to include two other wheat rust pathogens, P. striiformis (stripe rust) and P. triticina (leaf rust).