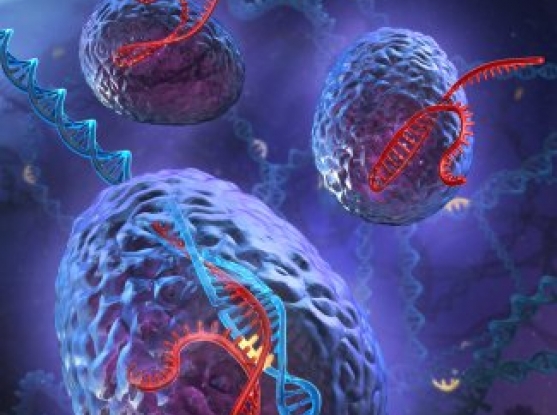 For the first time, CRISPR-Cas9 gene-editing technology has been employed in a whole organism model to systematically target every gene in the genome. A team of scientists at the Broad Institute and MIT’s David H. Koch Institute for Integrative Cancer Research have pioneered the use of this technology to “knock out,” or turn off, all genes across the genome systematically in an animal model of cancer, revealing genes involved in tumor evolution and metastasis and paving the way for similar studies in other cell types and diseases. The work appears online March 5 in Cell.

“Genome-scale guide RNA libraries are a powerful screening system, and we’re excited to start applying it to study gene function in animal models,” said co-senior author Feng Zhang, core member of the Broad Institute of MIT and Harvard, investigator at the McGovern Institute for Brain Research at MIT, and assistant professor in the MIT Departments of Brain and Cognitive Sciences and Biological Engineering. “This study represents a first step toward using Cas9 to identify important genes in cancer and other complex diseases in vivo.”

“Tumor evolution is an extremely complex set of processes, or hallmarks, controlled by networks of genes,” said co-senior author Phillip Sharp, Institute Professor at the Massachusetts Institute of Technology, board member at the Broad Institute, and member of the Koch Institute. “The in vivo application of gene-editing is a powerful platform for functional genomic discovery, offering a novel means to investigate each step in tumor evolution and identify the genes that regulate these hallmarks.”

CRISPR-Cas9 gene-editing technology enables scientists to investigate the role of genes and genetic mutations in human biology and disease. The system can remove the function of genes at the DNA level, versus other genetic perturbations like RNA interference that “knock down” genes at the RNA level. Broad Institute scientists previously performed genome-wide screens using CRISPR-Cas9 technology in cellular models, but that approach does not capture the complex processes at play in a whole organism. For example, for cancer to metastasize, malignant cells must leave the primary tumor, enter blood vessels to travel to a distant site in the body, leave the blood vessels, and thrive in a new environment. Zhang and Sharp teamed up to search for genes involved in metastasis by applying CRISPR-Cas9 technology in a whole animal model.

In the new study, cells from a mouse model of non-small cell lung cancer (NSCLC) were treated with the Broad’s pooled library of CRISPR guide RNAs targeting every gene in the mouse genome, known as the “mouse genome-scale CRISPR knockout library A” (mGeCKOa), along with the Cas9 DNA-cutting enzyme. The system introduces mutations into specific genes, disrupting their sequence and preventing the production of proteins from those genes. The approach ensured that in each cell, only a single gene was knocked out, and that all genes in the mouse genome were targeted by the heterogeneous population of cells in culture. The researchers then transplanted the cells into a mouse and found that cells treated with the knockout library formed highly metastatic tumors.

Using next-generation sequencing, the scientists were able to identify which genes were knocked out in the primary tumors and in the metastases, indicating that the genes are likely tumor suppressors that normally inhibit tumor growth but, when knocked out, promote it.

The results highlighted some well-known tumor suppressor genes in human cancer, including Pten, Cdkn2a, and Nf2, but included some genes not previously linked to cancer. Unexpectedly, the screen also implicated several microRNAs — small RNA segments that are functional in the cell.

More experimental work remains to fully explore the genes and microRNAs uncovered in the screen. Metastatic tumors are rarely biopsied in the clinic, making samples for research scarce, but future inclusion of metastases in cancer sequencing studies will yield more insight on hits from this study.

Researchers can take the same in vivo approach described in the Cell paper to examine the effects of gene over-expression, to screen circulating tumor cells or other cell lines, and to explore other cancer phenotypes, such as cancer stem cells, host-environment interactions, and angiogenesis.

“Our work provides a proof-of-principle in vivo knockout screen for identification of genes regulating different routes and steps of tumor evolution,” said Sidi Chen, co-first author and a postdoctoral fellow working in the Sharp lab.

The study also employed an efficient multi-level screening strategy, in which a smaller, more focused pool of guide RNAs is used to validate top gene hits. “After doing an unbiased, genome-wide screen, we designed a subpool library to quickly test many more targets than would otherwise be possible by targeting single genes in individual mice,” said Neville Sanjana, co-first author and a postdoctoral fellow in the Zhang lab. “The subpool also lets us see how these different genetic mutations compete within the same tumor.”

About the engineered CRISPR-Cas9 system

CRISPRs (Clustered Regularly Interspaced Short Palindromic Repeats) have recently been harnessed as genome editing tools in a wide range of species. The engineered CRISPR-Cas9 system allows researchers to mutate or change the expression of genes in living cells, including those of humans. The family of Cas9 nucleases (also known as Cas5, Csn1, or Csx12) recognizes DNA targets in complex with RNA guides. Researchers can now harness the engineered system to home in on specific nucleic acid sequences and cut the DNA at those precise targets. The cuts modify the activity of the targeted genes, allowing researchers to study the genes' function.

The Eli and Edythe L. Broad Institute of MIT and Harvard was launched in 2004 to empower this generation of creative scientists to transform medicine. The Broad Institute seeks to describe all the molecular components of life and their connections; discover the molecular basis of major human diseases; develop effective new approaches to diagnostics and therapeutics; and disseminate discoveries, tools, methods and data openly to the entire scientific community.