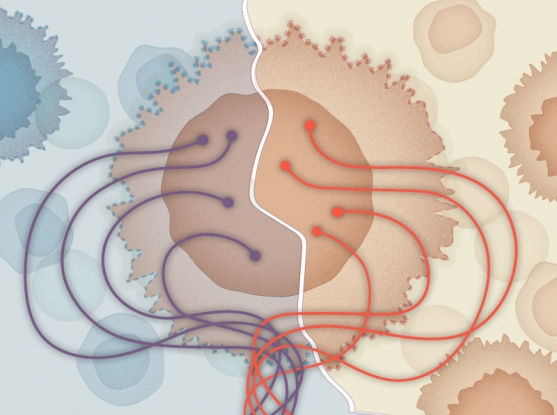 By identifying a unique gene signature for T cell dysfunction, Broad researchers have uncovered a potential path to help the immune system get back in the game against cancer.

The immune system’s T cells stand as one of the body’s main lines of defense against infection and cancer. But when confronted with an established tumor or a chronic viral infection — situations where they receive many signals for a long time to get out there and do something — T cells often do an odd thing. They just...stop.

These T cells exist in a unique state of dysfunction. They are neither anergic (unresponsive to all signals to attack) nor senescent (old and quiescent). Rather, they are stuck, unable to turn against the tumor or invading virus and wipe it out on their own. Their brakes are on.

“These cells look like normal activated T cells in many respects, but they don’t make anything that helps promote the immune response,” said Chao Wang, a postdoctoral fellow working with Broad associate members and Brigham and Women’s Hospital researchers Vijay Kuchroo and Ana Anderson. “They may actually hinder the response by producing suppressive factors.”

If the brakes could be turned off, however, these cells could be wielded as powerful therapeutic tools. The successful use of checkpoint inhibitors — drugs that interfere with T cell-regulating proteins such as PD-1 and CTLA-4 on dysfunctional T cells — to treat some cancers highlights this approach’s immense promise.

But not every patient or every tumor responds to these immunotherapy treatments, suggesting that additional circuits play roles in T cell dysfunction.

“The fact that checkpoint blockade works means that you can boost T cell function without pushing the cells into dangerous overactivity,” said Meromit Singer, a postdoctoral fellow working with Kuchroo and Broad core member and Klarman Cell Observatory director Aviv Regev. “By understanding the profile and the mechanisms underlying this dysfunctional state, we might be able to tweak the cells in a way that allows them to act in our favor.”

However, when others have looked for gene expression profiles that might tell dysfunctional and healthy, activated T cells apart, they found the profiles to be very similar. It is as though the two states — activation and dysfunction — were coupled.

Whether they are lies at the heart of a study Singer, Wang, Anderson, Kuchroo, Regev, and colleagues published recently in Cell. Using a mix of bulk and single cell transcriptomics and functional genomics, the group unwound the transcriptional threads of T cell activation and dysfunction in the context of cancer. Their findings not only revealed a distinct dysfunction gene expression program, but identified two of its major drivers, opening a new landscape of potential therapeutic targets that might be used to rouse dysfunctional T cells and get them back in the ring.

Two genes in particular jumped out in the expression data: metallothionein 1 (MT1), a zinc metabolism gene, and its relative MT2. When the team disabled (or “knocked out”) both in a mouse model, it slowed tumor growth but also had a surprising effect on the T cells themselves: The three marker-based cell populations remained, but all three behaved like normal, healthy T cells, even those carrying both dysfunction markers.

This gave the researchers an opening. “This was a beautiful result, because it meant we could compare cells that were generally similar but functionally different,” Singer said. “Genes expressed differently between the normal and MT knockout cells might direct the dysfunction phenotype.”

And indeed, when the team compared expression profiles across the three cell populations in both normal and MT knockout cells, several genes — many known to be T cell regulators — clustered into a distinct dysfunction-associated signature. 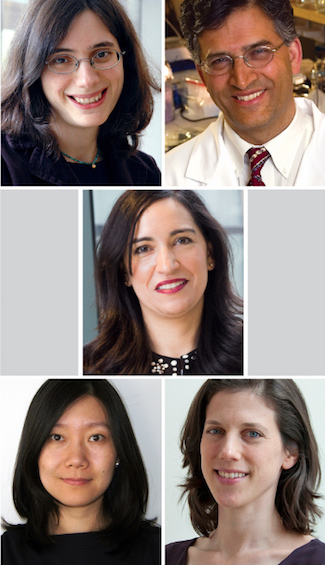 To this point, the team had used bulk batches of T cells as their source material, raising one key question: Was the signature real? “Maybe there was a coupling between activation and dysfunction,” Singer said, “but maybe the issue was that we were looking at a smoothie, that we’d been mushing healthy and dysfunctional subpopulations together like you’d mix a mango and a banana.”

Reassuringly, however, the team found the same dysfunction signature both in individual T cells analyzed at the single cell level and, importantly, in data from a study of human melanoma patients’ T cells.

“We found two subpopulations in our single cell data,” Singer said, “one expressing a dysfunction program and the other an activation program. It’s as though individual cells are deciding which program they’re going to express.”

Why might this be? “It may be that all T cells go through the activation stage in the tumor environment, where they’re under chronic stimulation,” Wang mused. “And something about the activation program allows the cell to turn on the dysfunction program.

“There are self-regulatory programs that in acute stimulation settings trigger cell death when a T cell’s job is done,” she continued. “We might be seeing an analogous autoregulatory response related to chronic stimulation.”

Key to almost any gene expression program are the transcription factors important for driving its execution. When the team sifted through their data, the factor GATA3 stood out as a possible top driver of their dysfunction program.

To test the possibility that GATA3 was an important driver, the team, with Regev lab postdoctoral fellow Le Cong, used CRISPR-Cas9 gene editing to knock the GATA3 gene out in freshly collected T cells and injected the modified cells into a mouse melanoma model. The result: reduced tumor growth, and markedly improved T cell function.

“It means that when these tumor-invading T cells lack GATA3, they stay active and well,” Singer said.

The team’s results suggest new questions about how these T cell populations evolve from functional to dysfunctional over time, something that time-course experiments could reveal.

Then there is the curious role of zinc. GATA3 is a zinc-finger transcription factor; it needs zinc to do its job. The MT genes encode proteins that help process zinc. And the dysfunctional T cells in the team’s models had markedly increased levels of free zinc in the cytoplasm, while MT knockout T cells contained roughly normal zinc levels.

“A third of our genome depends on zinc for proper function,” Wang noted. “When and where you have zinc in the cell really matters. The fact that the MT genes showed up prominently in our data suggests zinc dysregulation at the cellular level.”

“Now that we’ve homed in on GATA3, we can start to study its network in a focused way and look for potentially druggable targets,” Wang said. Singer agreed, adding, “We’re also interested in finding out whether screening for these populations clinically might help predict how a given patient’s tumor might respond to immunotherapy.”

“This study gives us a level of resolution into the T cell states present within tumors that we’ve never had before,” Anderson said. “Now that we better understand what’s going on in these cells and how it relates to dysfunction, we have a better sense of where to focus our search for new diagnostic and therapeutic targets.”