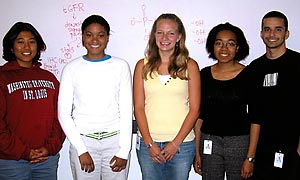 Whitney Green wants to be a medical doctor and maybe a researcher, too. So when the Princeton University junior learned of an opportunity to spend the summer studying genomics, she submitted her application. In a matter of months, she was working alongside clinician-researcher and Broad associate member Joel Hirschhorn, performing a rigorous evaluation of several genes for association with diabetes and obesity.

Whitney is one of five undergraduate students who recently completed the Summer Research Program in genomics at the Broad Institute. This nine-week program is part of a national effort to increase the number of underrepresented minorities in the fields of science and engineering. Eligible applicants from the United States have the opportunity to perform significant research at the Broad under the guidance of Broad scientists.

The Summer Research Program is funded by a grant from the National Institutes of Health and launched at the Broad in summer 2003. "We are thrilled to offer such a rich program to these undergraduates," said Angela Gabriel, the program administrator. "Our program has more than doubled in enrollment since the first summer. And we've also seen an increase in the number of applicants. We hope to see this upward trend continue."

Alejandro "Alex" Palma spent his summer studying new approaches to detect natural selection in the human genome. Working with a Broad team that had already identified 31 strong candidates for selection, Alex played a lead role in resequencing and genotyping these regions with the hope of finding functional variants on the proposed selected loci. "I saw a collaboration of researchers from diverse fields of study working together. It's pretty amazing and really sparked my interest in the field of genomics. I used to be strictly a math person, but now I'm majoring in both biology and mathematics," said Alex, a sophomore at MIT, who is the first generation in his family to attend a four-year undergraduate program.

Maya Solomon, a sophomore at Washington University, St. Louis, analyzed Broad's genome sequencing process to find new ways to optimize cost and efficiency without compromising quality. With no prior programming experience, Maya taught herself PERL, and then designed a new diagnostic tool that will be used to monitor a specific aspect of sequencing productivity.

"Maya brought with her a fresh and unbiased approach to her work. She has a drilling mind and asked provoking questions," said Boris Bugalter, Maya's supervisor and a researcher in Broad's Genome Sequencing Platform.

Jean Junior worked on a project to curate a new database of genomic information by collecting and documenting 313 new gene sets from published scientific literature. The database is used in conjunction with a Broad-developed microarray technology called Gene Set Enrichment Analysis (GSEA). Researchers use GSEA to test for the enrichment of gene sets in gene expression profiles corresponding to patients with diseases, such as different types of cancer.

"After running the GSEA method with the new database, I found that a gene set corresponding to specific targets was enriched with poor treatment outcome in two separate lung cancer studies. This new result shows the discovery potential of an improved gene set database. It also shows that GSEA is only as good as the database of gene sets," said Jean, a Harvard University freshman who hopes to become a scientist.

For Broad researcher Mike Zody, the summer program provided him both with an opportunity to mentor and to initiate a research project. "I had a study I'd been thinking about for a while but because of other priorities, I hadn't started. The fact that I could help a student, and that the student could help me by working on a new project, was ideal." Thus, Mike volunteered as a mentor and was paired with Amanda Gaudreau, a freshman at MIT. Amanda compared more than one million dog and human polymorphisms in an effort to identify mutation rates on specific regions of the human genome. Her work suggests that mutations in CpG sites, which account for about 30% of all mutation in mammalian genomes, may be ˜7% less common in dogs than humans. Because CpGs occur more frequently in the coding and regulatory regions of genes, this could have a significant impact on patterns of protein and regulatory evolution.

"Amanda's research produced good suggestive data that we will be looking at more closely," said Mike, who is a member of Broad's Genome Biology program. Amanda plans to continue collaborating on this and future projects at the Broad while pursuing her MIT degree.

In addition to individual research projects, the program offers a series of genomic seminars on a wide range of projects at the Broad. This year's topics included identifying novel cancer therapeutic targets through resequencing the cancer genome; the role of proteins and their posttranslational modifications in health and disease; using RNA interference (RNAi) to study the genetic basis for schizophrenia; and using genomic approaches to systematically predict all 1500 proteins that localize to the mitochondria.

"The students were excited about seeing how using freely available data sets could translate into identifying candidate genes for mitochondrial diseases," said Sarah Calvo, a researcher in the Broad's Program in Medical and Population Genetics who led the mitochondrial disease discussion. "The next day, Alex tracked me down to give me a specific idea about improving my research methods — apparently he'd been thinking about it overnight."

Program members also participated in a six-week journal club that focused on how recent high-throughput technologies (e.g., sequencing, microarrays, RNAi, and linkage analysis) have direct applications to studying human diversity and migration, cancer diagnosis, cancer treatment, and understanding the genetics behind complex behavior. Each week the students read a recent journal article, dissected the published figures and tables, and discussed the implications of the documented findings. The students were also trained to use related web resources and tools that provide access to the underlying high-throughput data.

"In the lab, you get to work on your project but oftentimes you are confused about what you are doing. The journal club strengthens your background in genomics and helps you to better understand your project and think about it more critically," said Whitney.

At the end of their program, the students face the biggest challenge of all: presenting their findings to a group of Broad researchers, including Broad director Eric Lander. "It was intimidating to present to such an audience because I felt like everyone else knew more about my work than I did," said Maya. "But as it turns out, this was only partly true. While everyone did know more about the DNA sequencing process as a whole, they didn't know anything about the research that I did on average channel intensities. It was pretty cool to be the 'expert' in the room."

Chromosome 18 : Barren but not a wasteland
New software moves microarray analysis from individual genes to whole networks of genetic interactions