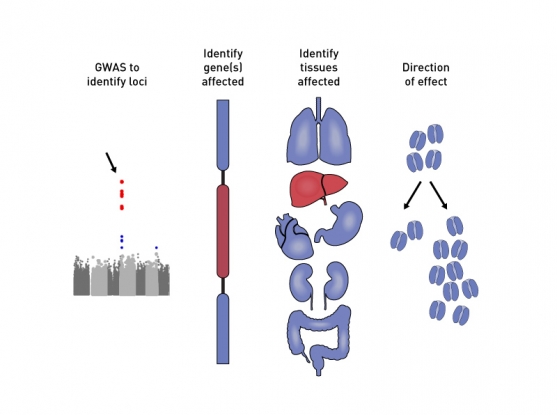 Following up on findings from genome-wide association studies, researchers identify two mechanisms by which disruptions in the gene SLC16A11 may play a role in type 2 diabetes

Following up on findings from a an earlier genome-wide association study (GWAS) of type 2 diabetes (T2D) in Latinos, researchers from the Broad Institute of MIT and Harvard and Massachusetts General Hospital (MGH) traced an association detected in that study to variants in a specific gene, SLC16A11, and uncovered two distinct mechanisms by which those variants disrupt the gene’s function in liver cells, possibly contributing to the pathogenesis of T2D. The findings, which appear this week in Cell, offer insights into the biology underlying T2D and suggest new leads in the search for therapeutics.

T2D is a chronic metabolic disease that affects how the body handles glucose, a type of sugar that serves as cells’ basic unit of fuel. While environmental factors play a role in developing T2D, it is also highly heritable — and the genetics involved are complex, with many genes contributing to disease risk. Though progress has been made in defining the genetic architecture of T2D, much remains unknown about how different types of genetic variation may lead to the disorder.

T2D afflicts over 400 million people worldwide, but has a disproportionate impact on certain populations, including those of Latin American descent (who are twice as likely as those of European ancestry to develop the disease). Suspecting that this disparity might help shed light on the condition’s genetic underpinnings, researchers at the Broad’s Diabetes Research Group, as part of the Slim Initiative in Genomic Medicine for the Americas (SIGMA) T2D Consortium, teamed with partnering institutions for the earlier GWAS study to discover genetic determinants of T2D from DNA samples from over 9,000 Hispanic individuals from Mexico and the United States. Previous studies had focused on populations of European descent.

Among the team’s findings was variation in a specific part of the genome that was associated with a roughly 30 percent increase in diabetes risk. That variant is absent in Africa and rare in Europe but common in the Americas  — and it explains as much as 20 percent of the increased prevalence of T2D among Latinos. But discovering an association is only a first step in understanding the role genetics plays in the development of the disease.

“Drilling down to the pathogenesis of disease is a very laborious road to travel. It’s relatively straightforward to discover genetic associations, but it’s another matter to then go from association to function,” explains the study’s co-senior author Jose Florez, co-director of Broad’s Metabolism Program, associate professor at Harvard Medical School, and chief of the Diabetes Unit at MGH.

Even focusing on a specific gene posed a challenge. Each locus found in GWAS spans a number of genes. The 2013 study, which was led by David Altshuler (now chief scientific officer at Vertex Pharmaceuticals), had shown that one gene in that region, SLC16A11, harbored several suspicious mutations, and more detailed genetic mapping of the region strengthened the case for focusing on it. Yet the role that gene might be playing in T2D remained a mystery.

“One of the challenges with this study was that the genetic hits pointed to a gene that had not been characterized, so we were really starting from scratch in terms of grasping the biology,” says Suzanne Jacobs, the associate scientific director of the Broad’s Diabetes Research Group and a co-senior author of the paper.

The team had yet to figure out what SLC16A11 did, and where. SLC16A11 belongs to a family of genes known to transport molecules across cell membranes, but the proteins that genes produce can perform many different roles in the body, and they can be active in some tissue types but not others. The researchers not only had to figure out how SLC16A11 performed in normal circumstances, but also then determine how mutations in the gene disrupted that function. Specifically, they needed to determine the “direction of effect”: Did gene activity go up or down? Understanding that function would provide vital clues about the gene’s potential role in T2D.

“When we set about answering all these questions, there wasn’t a single go-to experiment that we could do. We needed to use an array of tools at our disposal — molecular, biochemical, cellular, and physiological — to figure out how the gene might contribute to type 2 diabetes risk,” explains Eitan Hoch, a postdoctoral associate at the Broad and co-first author of the paper.

Through a series of tests, the team found that mutations were altering gene activity through two distinct mechanisms — both in the same “direction,” by disrupting the gene. Some genetic variations in SLC16A11 simply decrease its expression in the liver (an organ that helps regulate blood sugar levels, and is therefore implicated in T2D). Other variants disrupt an interaction with another protein. The disruption changes the location of SLC16A11 within the cell and prevents the protein from doing its job as a transporter, influencing how fats are handled by the liver.

“To then determine how disrupting the gene might play out in the context of disease, we chemically knocked out the activity of SLC16A11 in human liver cells,” explains co-first author Victor Rusu, a former Harvard graduate student at Broad now at Jnana Therapeutics. “We found that knocking this gene down resulted in changes in fatty acid and lipid metabolism that are reminiscent of what we see in insulin resistance and T2D.”

The findings suggest that reviving SLC16A11 function may be beneficial for treating T2D, opening new avenues in the search for therapeutics. Such treatments, if discovered, could counter not only the effects of mutations in SLC16A11, but also potentially any T2D-associated variants that may trigger the disease through similar mechanisms.

“There is a lot more that needs to be done to determine where these findings fit within the T2D picture, but this study opens up a new direction in T2D research, identifying a potential new pathway that we don’t yet fully understand,” says Eric Lander, president and founding director of the Broad and a co-senior author of the study. “It’s a great example of how genetic discoveries lead to biological insights and ultimately inform the search for much-needed treatments.”

Watch a Cell video abstract on this study.