Tumors hide from the immune system with help from this protein 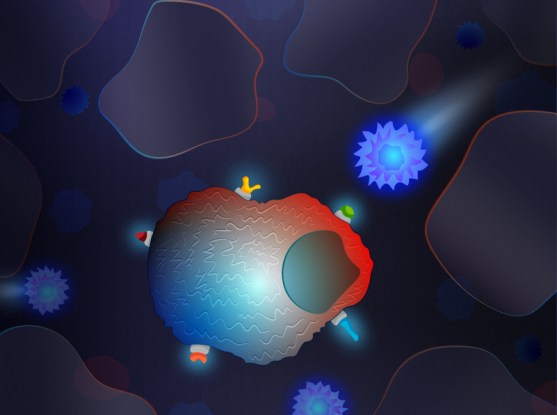 Called SETDB1, the protein could one day be targeted by new drugs for cancer patients who don’t respond to existing immunotherapies.

Cancer drugs called immune checkpoint inhibitors boost the immune system’s ability to find and destroy tumor cells, but they don’t work for most patients. Researchers at the Broad Institute of MIT and Harvard, Massachusetts General Hospital, and Brigham and Women’s Hospital have identified a protein, called SETDB1, that helps cancer cells evade the immune system. When the team blocked this protein in mouse models of cancer, immune cells increased their cell-killing activity, and tumors shrunk when the scientists treated the animals with immune checkpoint inhibitors.

The findings, published in Nature, suggest that the protein is a promising target for cancer drug development. Inhibiting SETDB1 could make immunotherapy more effective in more patients.

“One of the reasons immunotherapies don’t work for many cancer patients is that there aren’t enough targets on the tumor cells for the immune system to recognize,” said study co-senior author Bradley Bernstein, director of the Broad’s Gene Regulation Observatory, and a professor of pathology at Harvard Medical School and Mass General. “If we can introduce new targets on the cancer cells that the immune system can see, that could expand the number of patients who respond to immunotherapy drugs, like those that block PD-1.”

Cancer cells use a variety of molecular tricks to conceal themselves from the immune system, including switching off certain genes by changing how DNA is packaged in the cell’s nucleus. Such epigenetic changes have been linked to tumor immunity, but scientists are only beginning to understand the mechanism.

To determine which genes might be involved, Bernstein and colleagues collaborated with Broad’s Tumor Immunotherapy Discovery Engine to systematically delete almost 1,000 epigenetic regulators individually in tumor cells. They then injected the cells into mice, and treated the animals with immune checkpoint inhibitors to assess which gene deletions made the cells more sensitive to immunotherapy. They found that very few cells with SETDB1 deletions survived the drug treatment, suggesting that SETDB1 may help cancer cells evade immune detection. Data from cancer patients provided further evidence that SETDB1 also protects human tumors from immunotherapy.

Next, the team explored how SETDB1 could have such a potent effect on tumor cell immunity. They found that deleting SETDB1 caused many transposable elements to produce RNA and proteins. Transposable elements are segments of DNA that are often remnants of viral genetic material that got embedded in the human genome during our evolutionary history. Healthy cells normally hold these viral relics, once termed junk DNA, in check.

In collaboration with Susan Klaeger, Steven Carr, and others in the Broad’s Proteomics Platform, the team found that blocking SETDB1 in tumor cells increased expression of proteins encoded by these viral elements. These proteins then attracted immune cells to the tumor.

“Viral proteins are easy for the immune system to recognize because they're seen as foreign invaders, not human proteins,” said Broad associate member Robert Manguso, a co-senior author of the study. “We didn’t necessarily expect that these ancient sequences could produce targetable antigens for the immune system. If tumors start expressing them, the immune system is going to recognize and potentially eliminate the tumor.” Manguso is also a principal investigator in the Massachusetts General Hospital Center for Cancer Research, and co-director of the Tumor Immunotherapy Discovery Engine project within the Broad’s Cancer Program.

The researchers were also surprised to find that deleting SETDB1 activated immunity-related genes, many of which were located near the viral relics. These genomic areas undergo rapid evolution, so this finding suggests that SETDB1, may also help the immune system evolve and adapt to new infectious challenges.

“It was unexpected that an epigenetic regulator that silences transposable elements would also affect so many immune genes in the neighboring regions,” said Gabriel Griffin, co-first author of the study and a postdoctoral scholar at Broad and Brigham and Women’s Hospital. “The upshot is that SETDB1 loss has two separate and profound effects, both of which help the immune system detect and kill cancer cells.”

The authors say their findings suggest ways to reveal new targets for cancer immunotherapy.  “What other regulators of immune recognition and response are hiding undiscovered in the genome of cancer cells?” said Manguso.

This research was funded in part by Calico Life Sciences LLC, the Broad Institute of MIT and Harvard, the National Cancer Institute of the National Institutes of Health, the Wong Family Award, and the Damon Runyon Cancer Research Foundation.