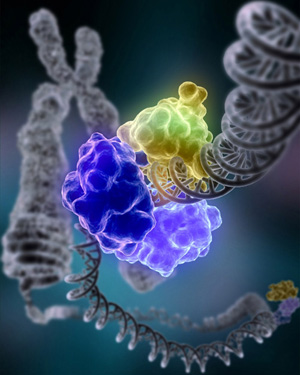 Tumor suppressor genes are the safeguards of the cell. Normally, these genes help prevent - or "suppress" - abnormal cells from developing into full-blown tumors. But when the genes are disabled, as they frequently are in cancer cells, an important safety net is no longer in place. And that can enable cells to grow uncontrollably, forming the tumors that are the hallmarks of cancer.

There are a variety of ways in which tumor suppressor genes help snuff out tumors before they get started. For example, when a cell's DNA is damaged, that damage needs to be fixed before the cell divides in two. Otherwise, the genetic mistake can be passed on to other cells, thus raising the likelihood of cancer. So, some tumor suppressors slow down the inner workings of cells, allowing time for DNA damage to be repaired before cell division takes place. Others are directly involved in the DNA repair itself. In addition, some tumor suppressor genes work not by salvaging cells with genetic imperfections, but by instructing those blemished cells to die - in effect, to commit cell suicide.

Several tumor suppressor genes operate in humans, identified through decades of research, and there are likely many others that scientists have not yet found. Two important examples of tumor suppressors are the genes BRCA1 and BRCA2. Errors in these genes are linked with an increased risk of inherited forms of breast and ovarian cancer.

You can learn more about tumor suppressor genes and the genetic missteps that can lead to cancer by reading about the work of the Broad Institute's Cancer Program. In addition, scientists in the Broad Institute's Program in Medical and Population Genetics are involved in efforts to understand how inherited factors (e.g., genes passed down to you from your parents) can either raise or even lower your risk of developing cancer.

Some general information about the biology of cancer - how cells work and how they can develop into tumors - can be found here at the American Cancer Society's website. If you are interested in knowing more about BRCA1, BRCA2 and breast cancer risk, check this out from the National Cancer Institute.