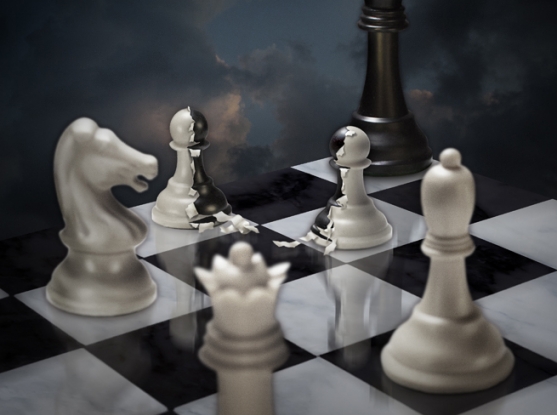 One of cancer’s most frightening characteristics is its ability to return after treatment. In the case of many forms of cancer, including the skin cancer known as melanoma, tailored drugs can eradicate cancer cells in the lab, but often produce only partial, temporary responses in patients. One of the burning questions in the field of cancer research has been and remains: how does cancer evade drug treatment?

New research by a team from the Broad Institute, Dana-Farber Cancer Institute, and Massachusetts General Hospital suggests that some of the answers to this question do not lie in cancer cells themselves. To find the answers, scientists are looking beyond tumor cells, studying the interplay between cancer cells and their healthy counterparts. The research team has found that normal cells that reside within the tumor, part of the tumor microenvironment, may supply factors that help cancer cells grow and survive despite the presence of anti-cancer drugs. These findings appear online this week in a paper published in Nature.

“Historically, researchers would go to great lengths to pluck out tumor cells from a sample and discard the rest of the tissue,” said senior author Todd Golub, director of the Broad’s Cancer Program and Charles A. Dana Investigator in Human Cancer Genetics at the Dana-Farber Cancer Institute. Golub is also a professor at Harvard Medical School and an investigator at Howard Hughes Medical Institute. “But what we’re finding now is that those non-tumor cells that make up the microenvironment may be an important source of drug resistance.”

To investigate how the tumor microenvironment may contribute to drug resistance, the researchers designed experiments in which cancer cells were grown in the same wells (miniscule test tubes no larger than a pencil eraser) along with normal cells. These co-cultured cells were then treated with anti-cancer drugs. When grown alone, such cancer cells died in the presence of many of these targeted agents, but when grown together with normal cells, cancer cells developed resistance to more than half of the 23 agents tested.

These observations reflect what clinicians often see in patients with cancers such as melanoma. In the case of melanoma, targeted therapies have been developed against a specific, common mutation in a gene known as BRAF. While some patients' tumors show an overwhelming response to BRAF inhibitors and seem to disappear, other patients' tumors only respond by slightly decreasing in size. The failure to shrink tumors at the outset suggests that those tumors possess some level of innate resistance – the ability to evade drugs from the beginning of treatment.

“Even though recent advanced in targeted therapy have caused tremendous excitement in melanoma, the fact remains that drug resistance eventually develops in nearly all metastatic melanomas treated with RAF inhibitors, and in some cases is present at the outset of treatment,” said Levi A. Garraway, a senior associate member of the Broad Institute, an associate professor at Dana-Farber Cancer Institute and Harvard Medical School. “There are many different types of mechanisms that tumors may hijack to circumvent the effects of therapy…no single experimental approach can capture all of these potential mechanisms. Thus, the application of complementary approaches can offer considerable synergy in terms of discovering the full spectrum of clinically relevant resistance mechanisms.”

“We can take cancer cells out of a melanoma patient, put them on a dish, and most times they will turn out to be extremely sensitive to the targeted agents, but that’s not what we see in patients,” said Ravid Straussman, a postdoctoral fellow at the Broad Institute and first author of the Nature paper. “Why do we get just a partial response in most patients? We set out to dissect this question, and the next logical step was to think beyond cancer cells.”

After completing systematic, high-throughput screens of more than 40 cancer cell lines, the researchers chose to focus on melanoma, looking at whether factors normal cells secrete help cancer cells resist treatment. They measured more than 500 secreted factors and found that the factor most closely linked to BRAF inhibitor drug resistance was hepatocyte growth factor (HGF). HGF interacts with the MET receptor, abnormal activation of which has been tied to tumor growth in previous studies but never to drug resistance in melanoma.

In addition to studying cells in the lab, the research team sought to replicate their findings in samples from cancer patients. Keith Flaherty, director of developmental therapeutics at Massachusetts General Hospital Cancer Center and an associate professor at Harvard Medical School, and his lab provided 34 patient samples for study. The team measured levels of HGF in these samples and saw a relationship between how much HGF was present and the amount of tumor shrinkage patients experienced. For example, tumors in patients with high levels of HGF shrank less than those in patients with low HGF levels.

“To try to explore in patient samples what factors in the microenvironment are not only present but functionally important in drug resistance would have been largely impossible. Coming up with candidates in the lab and then exploring relevance in humans in a targeted way is the only tractable approach,” said Flaherty. “By taking this high-throughput screening, hypothesis-generating approach, we could then follow up by looking at patient samples. In a case like melanoma, where you already have a targeted therapy available, it puts you on good footing to narrow in on specific factors that may be at play in drug resistance.”

Several HGF/MET inhibitors are in clinical development or are FDA-approved for other indications, making clinical trials combining these inhibitors with BRAF inhibitors feasible in the future. In addition, researchers could follow the same approach taken by the team to screen other drugs currently in development, identifying mechanisms of resistance and ways to counter them even before treatment begins.

“Drug resistance should no longer surprise us,” said Golub. “We’re thinking about how to do this – how to systematically dissect resistance – much earlier in the drug development process so that by the time a new drug enters the clinic, we have a good sense of what the likely mechanisms of resistance will be and have a strategy to combat them.”

This work was supported by the Howard Hughes Medical Institute, NCI grants, and a Melanoma Research Alliance Team Science Award.


About the Broad Institute of Harvard and MIT
The Eli and Edythe L. Broad Institute of Harvard and MIT was launched in 2004 to empower this generation of creative scientists to transform medicine. The Broad Institute seeks to describe all the molecular components of life and their connections; discover the molecular basis of major human diseases; develop effective new approaches to diagnostics and therapeutics; and disseminate discoveries, tools, methods and data openly to the entire scientific community.