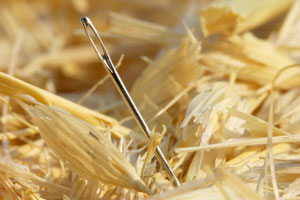 Before now, pinpointing the precise changes in the human genome that drive evolutionary change was like searching for a needle in a haystack, researchers say.
Image courtesy of iStockphoto

Fossils may provide tantalizing clues to human history but they also lack some vital information, such as revealing which pieces of human DNA have been favored by evolution because they confer beneficial traits — resistance to infection or the ability to digest milk, for example. These signs can only be revealed through genetic studies of modern humans and other related species, though the task has proven difficult. Now, in a paper appearing in the January 7 edition of Science Express, researchers describe a method for pinpointing these preferred regions within the human genome that offers greater precision and resolution than ever before, and the possibility of deeply understanding both our genetic past and present.

"It's clear that positive natural selection has been a critical force in shaping the human genome, but there are remarkably few examples that have been clearly identified," said senior author Pardis Sabeti, an associate member of the Broad Institute of Harvard and MIT and an assistant professor of organismic and evolutionary biology at Harvard University. "The method we've developed makes it possible to zero in on individual genes as well as the specific changes within them that are driving important evolutionary changes."

Positive natural selection is a process in which advantageous traits become more common in a population. That is because these traits boost an individual's chances of survival and reproduction, so they are readily passed on to future generations. Identifying such traits — and the genes underlying them — is a cornerstone of current efforts to dissect the biological history of the human species as well as the diseases that threaten human health today.

"In the human genome, positive natural selection leaves behind very distinctive signals," said co-first author Sharon Grossman, a research assistant at Harvard University and the Broad Institute. Yet earlier methods for detecting these signals are limited, highlighting relatively large chunks of the genome that are hundreds of thousands to millions of genetic letters or "bases" in length, and that can contain many genes.

Of the hundreds of these large genomic regions thought to be under positive natural selection in humans, only a handful have so far been winnowed to a precise genetic change. "Finding the specific genetic changes that are under selection can be like looking for a needle in a haystack," said Grossman.

Sabeti, Grossman and their colleagues wondered if there might be a way to enhance this genomic search. Because existing methods for detecting natural selection each measure distinct genomic features, the researchers predicted that an approach that combines them together could yield even better results.

After some initial simulations to test their new method, the research team applied it to more than 180 regions of the human genome that are thought to be under recent positive selection, yet in most cases, the specific gene or genetic variant under selection is unknown.

The researchers' method, called "Composite of Multiple Signals" or CMS, enabled them to dramatically narrow the size of the candidate regions, reducing them from an average of eight genes per region to one. Moreover the number of candidate genetic changes was reduced from thousands to just a handful, helping the researchers tease out the needles from the haystack.

"The list of genes and genetic loci we identified includes many intriguing candidates to follow up," said co-first author Ilya Shylakhter, a computational biologist at the Broad Institute and Harvard University. "For example, a number of genes identified are involved in metabolism, skin pigmentation and the immune system."

In some cases, the researchers were able to identify a specific genetic change that is the likely focal point of natural selection. For example, a variation in a gene called protocadherin 15, which functions in sensory perception, including hearing and vision, appears to be under selection in some East Asian populations. Several other genes involved in sensory perception also appear to be under selection in Asia. In addition, the team uncovered strong evidence of selection in East Asians at a specific point within the leptin receptor gene, which is linked to blood pressure, body mass index and other important metabolic functions.

Interestingly, the researchers also localized signals to regions outside of genes, suggesting that they function not by altering gene structure per se, but by changing how certain genes are turned on and off.

While the findings in the Science paper offer a deep glimpse of evolution's handiwork, the researchers emphasize that further studies of individual genetic variations, involving experiments that explore how certain genetic changes influence biological function, are necessary to fully dissect the role of natural selection and its impact on human biology.

"This method allows us to trace evolution's footprints with a much finer level of granularity than before, but it's one piece of a much larger puzzle," said Sabeti. "As more data on human genetic variation becomes available in the coming years, an even more detailed evolutionary picture should emerge."