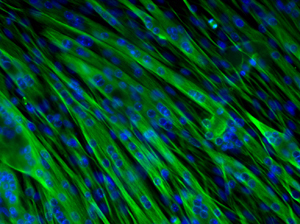 The cell’s engine is a set of bean-shaped organelles called mitochondria. Just as a car’s engine transforms fuel into a usable energy form, these powerhouses transfer the energy of nutrients to a chemical, ATP, which serves as the main power source for cellular functions. Studying isolated mitochondria, many scientists have explored this process, known as oxidative phosphorylation (OXPHOS). But until recently, large-scale studies of OXPHOS in whole, live cells — a more natural environment — had been virtually impossible.

Three years of dedicated work by Broad Institute scientists has now produced an innovative toolkit that combines measures of whole cell physiology and genetic activity to generate a rich encyclopedia of mitochondrial function. The research team, led by Broad associate member Vamsi Mootha, also mined this compendium to answer previously intractable questions about the role of mitochondria in healthy cells and in disease. The research, supported by funds from the Smith Family Foundation and the American Diabetes Association, is described in the February 24 advanced online publication of Nature Biotechnology.

The effort began in 2003 when Mootha, who is also an assistant professor of systems biology at Harvard Medical School and an assistant professor of medicine in the Center for Human Genetics at Massachusetts General Hospital, and his colleagues discovered that OXPHOS genes were less active in patients with type 2 diabetes, than in non-diabetics. Later studies described a similar reduced activity in pre-diabetics, who have moderately high glucose levels, and in people with normal glucose levels who have a family history of diabetes.

These results all pointed in the same direction: oxidative phosphorylation appears to play a role in diabetes. In light of the fact that diabetes interventions like exercise and improved diet can boost OXPHOS activity, the findings led Mootha to wonder about yet undiscovered drugs that might improve diabetes in a new way — by manipulating mitochondrial activity. However, because OXPHOS is a complex process that cannot be described by any single measurement, efforts to find chemicals that boost the process would have to harness diverse new advances in genomic science.

Wagner worked to develop a method of monitoring separate steps in the OXPHOS pathway in live cells. To enable the study, research technician Tamara Gilbert first perfected the tricky technique of growing and maturing skeletal muscle cells in the tiny, densely packed wells necessary for high-throughput screening. By monitoring four components of ATP synthesis — membrane potential, flux, ATP levels, and toxic byproducts — the team can gauge OXPHOS activity. “It’s a bit like taking your car into the shop,” said Mootha. “To perform engine diagnostics, the mechanic will attach different probes to test the battery, ignition, and exhaust, giving a well-rounded picture of the engine’s status.”

While the four cellular probes reveal much about the organelle’s activity at any point in time, taking genetic activity into account may give a more complete picture of how mitochondria respond and adapt to changes. “You can’t simply look at physiology,” said Mootha. “You also have to look at transcriptional changes.”

To fill this need, Kitami collaborated with researcher David Peck to customize the gene-expression high-throughput screening (GE-HTS) system developed by Peck’s colleagues in the Broad’s Cancer Biology Program, notably Kim Stegmaier and program director Todd Golub. GE-HTS allows for the easy measurement of dozens of DNA transcripts, which correspond to a “signature” of gene expression. The custom GE-HTS system created by Kitami and Peck is unique because it includes for the first time measures of genes encoded in both nuclear and mitochondrial DNA to assess activity of the entire OXPHOS system. “With the combination of physiologic and genomic technology, there’s really no other place on the planet where we could have accomplished this feat,” said Kitami.

Towards a mitochondrial user manual

Although the initial goal was to discover new potential drugs for diabetes, the system’s advanced capabilities provided an unprecedented platform to probe mitochondrial biology in a systematic way. The team exposed cells to a total of 2,490 commercially available chemicals, many of which are FDA-approved drugs, producing a compendium of genetic and physiological data on the organelle’s response to a wide variety of chemicals. “The collection we used is popular because they’re well-known compounds,” said Wagner. “You can formulate a hypothesis about why something might be active in your screen, because you already know, more or less, what it does in a cell.” The data from that screen is now a publicly available dictionary of mitochondrial function that can be incredibly useful for other researchers, said Wagner.

Delving into the compendium, Mootha’s team was able to perform their own studies of basic biology and drug toxicity, in addition to searching for new potential drugs. The first study questioned the coordination between the nuclear genome — with its 23 pairs of chromosomes — and the miniature one, by comparison, housed in mitochondria. OXPHOS genes, it turns out, are distributed amongst both genomes and tend to be regulated in a coordinated fashion. An imbalance between them could, theoretically, provide a basis for disease. Among the thousands of chemicals screened, Mootha and his group found that some boosted the activity of only the nuclear OXPHOS genes, while others amplified only mitochondrial ones. This gave proof that the two genomes could be chemically decoupled, and suggested some of the signals that might trigger the disconnection.

Toxicity on all cylinders

The team next focused on a clinical question: Do mitochondria play a role in drug toxicity? Worldwide, nearly 100 million patients take cholesterol-lowering “statin” drugs, which block the production of cholesterol, a fat that can clog arteries and lead to heart disease. And up to 1% of those patients experience muscle weakness or pain, the exact cause of which is unclear. A likely suspect, though, is ubiquinone, a chemical normally formed from cholesterol that acts in oxidative phosphorylation in mitochondria. One hypothesis is that statins damage muscle tissue by starving the body’s cells of ubiquinone.

The mitochondrial compendium created by Mootha’s team provided a rare opportunity to test this notion. After looking up the six statins tested in their screen, the team discovered that three did in fact have strong effects on mitochondrial activity. But the researchers wondered if other types of drugs might have similar effects, in part because statins are often taken in combination with other medicines.

Because their screen included many other FDA-approved drugs, the team was then able to simply mine the data for non-statin drugs that might alter mitochondrial function. A handful of OXPHOS-diminishing drugs uncovered in the search were also linked to muscle damage — evidence that the side effect might stem from dysfunctioning mitochondria. One of those drugs is a blood pressure medication, propanolol, which is sometimes taken by patients who are also on statin medication, suggesting the two drugs in combination could produce an additive muscle-damaging effect. Testing this hypothesis in a follow-up study in cells, they found that indeed, the three statins each produced even greater toxicity when combined with propanolol. Although the experiment was performed in cells, not humans, further study may reveal important clinical implications for patients on both statins and blood pressure medications.

Finally, the researchers returned to the initial driving force behind the system: the search for new potential drugs to treat common human diseases. Diabetes, neurodegeneration, and even the aging process itself had been previously linked with both decreased OXPHOS activity and an abundance of toxic byproducts in the form of reactive oxygen species (ROS). So the team explored the compendium for compounds that reversed the trend. Surprisingly, they homed in on several drugs that work by altering microtubules, which make up the cell’s internal “chassis.”

The finding suggests an interesting link between microtubule biology and OXPHOS regulation. Two of the drugs, mebendazole (a treatment for intestinal worm infections) and deoxysappanone B (a Chinese herbal medicine ingredient), had been previously reported to improve diabetes, providing anecdotal support for the idea that altering microtubules could reverse the gene expression and physiologic signature of diabetes.

Though further work is needed to fully explore the potential of these drugs, Mootha believes the team has hit upon a pathway that can tweak the two measures in the right way. “You want a clean energy system in the cell,” explained Mootha. “More ATP production, but not at the expense of lots of pollution.”

Given the number of diseases that involve metabolism and OXPHOS dysfunction, the screening toolkit and compendium are a treasure trove for mitochondrial biologists, providing a deep look into the cell’s powerhouse.