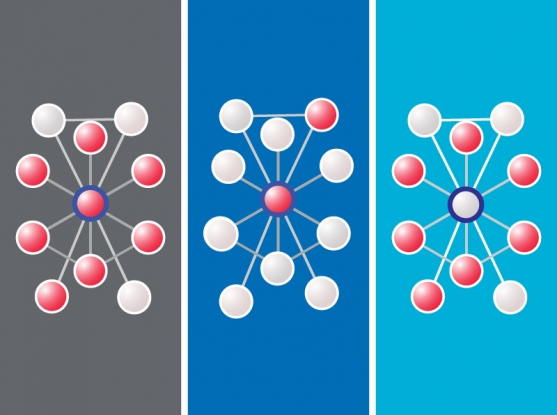 Any one tumor might harbor mutations in thousands of different genes. The challenge is to find the driver mutations — which fuel cancerous activity, and might be promising treatment targets — within the haystack of passengers (mutations that, while present in the tumor, do not help it grow or spread).

In a paper in Nature Methods, a team led by Heiko Horn and Kasper Lage of the Broad Institute’s Stanley Center for Psychiatric Research and Massachusetts General Hospital MGH; Michael Lawrence and Jesse Boehm of the Broad Cancer Program; and Gad Getz of the Cancer Program and MGH describe NetSig, an open-source computational tool that looks for cancer-driving mutations by joining cancer genome data with protein interaction data. NetSig is designed to complement existing tools and expand discovery from cancer genomes in any existing analysis pipeline.

Proteins interactions reveal a sort of genomic Facebook, a social network through which genes share information and carry out a cell’s functions. The added functional perspective can help researchers identify drivers with greater confidence, especially in genes that mutate only rarely.

To that end, NetSig taps InWeb_InBioMap (InWeb_IM), a protein interaction map with data on more than half a million protein-protein interactions. Lage’s lab developed InWeb_IM in 2016 for functionally interpreting large genomic data sets.

To develop NetSig, the team merged InWeb_IM with The Cancer Genome Atlas (TCGA)-derived exome data from 4,742 tumors spanning 21 cancer types. The team then tested the tool's capabilities in a series of in silico and in vivo experiments, finding that NetSig could:

The team has loaded NetSig into FireCloud, a cloud-based cancer genomics toolkit and TCGA data repository developed by Broad’s Cancer Genome Computational Analysis team. NetSig’s code is available on the Lage lab website. While they have initially applied it to cancer, the team notes that the tool could be adapted to exome-sequencing data for many complex conditions that involve large numbers of genes, such as psychiatric diseases.

Support for this work came from National Institute of Mental Health, Massachusetts General Hospital, the Broad Institute, the American Cancer Society, the LUNGevity Foundation, the Lundbeck Foundation, and the Simons Foundation.