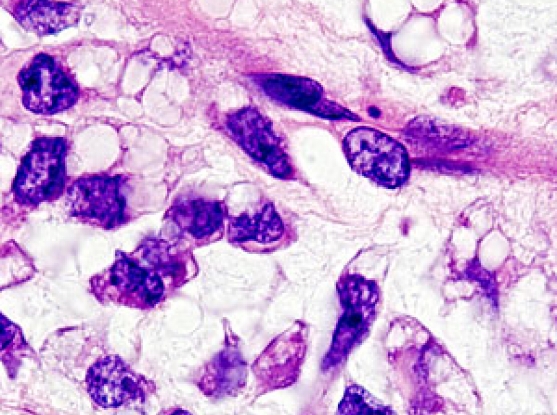 Soft-tissue sarcomas are a rare form of cancer, accounting for less than one percent of cancer cases in the United States. But for patients and families dealing with this disease, the cancer is omnipresent. Although most large-scale studies of cancer genomes have focused on common forms of cancer, such as lung cancer, brain cancer, or breast cancer, a paper in the new issue of Nature Genetics sheds new light on many of the genomic alterations found in some types of soft-tissue sarcomas.

Jordi Barretina, a research scientist in the Broad’s Cancer Program and at Dana-Farber Cancer Institute, has been studying sarcomas for the last few years. “I’ve been approached by patients at meetings and conferences, and you realize that they’re eager to see advances in this field,” said Barretina who is first author of the paper, “But since [soft-tissue sarcomas] are not as studied as other cancer types, there’s less of a body of knowledge to rely on. At the same time, that offers a great opportunity to define new targets for soft tissue sarcoma therapy.”

There are over 50 soft-tissue sarcomas, which develop in connective tissue, such as muscles, tendons, nerves, and blood vessels (sarcomas are grouped together because they produce many of the same symptoms and have similar microscopic characteristics). Barretina and his colleagues focused on seven of the most aggressive. The researchers set out to identify mutations that could inform the development of targeted therapies for specific kinds of tumors. To find these alterations, they initially compared pairs of DNA samples, one taken from normal tissue and one taken from a tumor.

“Studying a rare form of cancer can be challenging because sample availability is definitely a limitation, but we were fortunate enough to collaborate with Memorial Sloan Kettering Cancer Center (MSKCC), which has an extensive bank of soft-tissue sarcoma samples,” said Barretina. The partnership between Memorial Sloan Kettering and the Broad Institute, as well as collaborations with researchers from the Dana-Farber Cancer Institute, made this project possible.

Alex Ramos, a graduate student in the lab of Broad Senior Associate Member Matthew Meyerson, senior author of the paper, said he appreciated the new insights and perspectives that the oncologists, surgeons, doctors, and other computational biologists could offer. “It was a very fruitful collaboration,” said Ramos who works at the Dana-Farber Cancer Institute and Broad Institute. “[Researchers from MSKCC] provided samples and helped with computational analysis, which we did as well. It was a huge collaboration with a lot of labs involved, and it worked out well.”

The researchers made three genomic discoveries that could affect the way certain soft-tissue sarcomas are treated. For two kinds of sarcomas, the researchers found several types of mutations to the gene Neurofibromatosis type 1 (NF1), which has also been recently implicated in lung cancer and glioblastoma. Mutations to this gene appear to turn on the mTOR pathway, which is involved in cell growth (uncontrolled growth leads to tumors). There are drugs that target this pathway – mTOR inhibitors – that could be tested against these sarcomas.

Another telltale mutation the researchers noticed was to the gene PIK3CA. In one sarcoma subtype, patients who had a mutated form of this gene did not survive as long as those who did not have the mutated gene (other researchers have seen similar results in breast cancer patients with and without a mutated form of PIK3CA). Almost one in five of the tumors in this sarcoma tested had this mutation. This type of tumor might respond to a class of drugs known as PI3K inhibitors, which are already being tested in clinical trials.

“I think this provides a spring board for future and more detailed studies of sarcoma,” said Meyerson, whose primary appointment is at the Dana-Farber Cancer Institute. “There are some immediately actionable items; probably the most actionable will be the hope for PI3 kinase inhibition.”

Researchers also looked for copy number alterations – missing or repeated stretches of DNA – in the tumors. Often in cancer, an oncogene (a mutated gene that helps give rise to cancer) sits in one of these repeated regions – multiple copies of the gene enable the tumor to grow uncontrollably. The researchers repeatedly found extra copies of a region on the longer arm of chromosome 12 that’s known to harbor at least one oncogene: CDK4. Knocking down or turning down the activity of this gene in soft-tissue sarcoma cells stopped the cells from growing. Interestingly, knocking down another gene in this region – YEATS4 – had the same effect. YEATS4 is not a known oncogene but could be playing an important role in the tumor cells.

The researchers were able to confirm an important role for a third oncogene in this vicinity, MDM2. MDM2 doesn’t directly allow cancer to grow; instead, it binds to a protein called p53, preventing the protein from doing its job of preventing tumor growth. There are chemical compounds known as nutlins (currently in clinical trials) that may be able to prevent MDM2 from binding to the protein.

One of the unique aspects of the study was that it looked at structural changes (deletions, amplifications, mutations, rearrangements) to the genomes as well as what these changes might mean (known as functional analysis). “Most genomic studies to date have done either large-scale structural analysis or functional analysis,” said Shantanu Banerji, a visiting postdoctoral scholar at the Broad Institute and Dana-Farber Cancer Institute. “Bringing these together was unique.”

In addition to finding potential targets for therapy, the new analysis also brought to light some of the weaknesses in the way that sarcomas are grouped. The pattern of missing and repeated regions of the genome showed that two types of tumor – pleomorphic liposarcoma and myxofibrosarcoma – appear to be strikingly similar and may be one entity rather than two distinct soft-tissue sarcomas. Looking at cancers at a genetic level could give researchers a more effective tool for grouping tumors, allowing them to distinguish cancers based on mutations and potential drug targets rather than on the symptoms they cause or their appearance beneath a microscope.

One of the tumors included in the study is GIST – gastrointestinal stromal tumor, which represents one of the major successes in targeting a specific genetic alteration in cancer. Since 2002, a cancer drug known as imatinib (Gleevec) has been used against GIST tumors that have a particular mutation called KIT. The authors hope that their findings will yield more success stories.

“We feel really gratified at this first look, especially since all of [the data] will be made available to the soft-tissue sarcoma research community,” said Barry Taylor, a research fellow in the Sander Research Group at MSKCC. “Other scientists can expand on our work and explore the data in ways we haven't thought of and ask questions that reflect their own diverse interests in sarcoma biology.”

Banerji, who plans to return to the clinic as an oncologist, said that conducting genomic research has given him a different perspective. “[Research] gives you an idea of the actual challenge you are up against when you are treating patients. You realize that every patient is unique,” he said. “We understand that from a philosophical perspective, but the evidence is emerging that from a molecular perspective, they are probably very different as well. By understanding that better, the clinical relevance and the clinical impact will become apparent.”

Taylor described the paper as a thought-provoking first look at these cancers. “These are uncommon cancers, but while they affect fewer people than some of the much more common diseases, they are just as important to the people who are diagnosed with these tumor types,” he said. “It’s a long road and there’s much to be done, but it’s a tantalizing first look at what may be key drivers in these subtypes.”