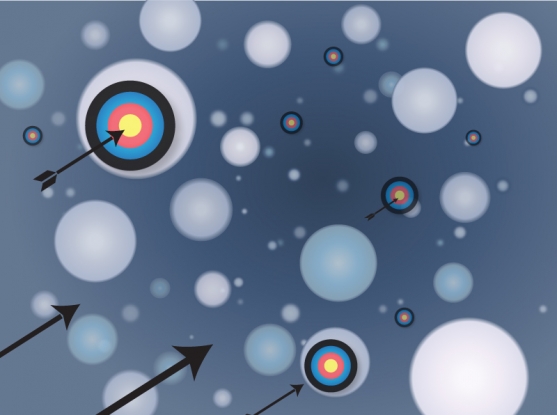 Credit : Image by Lauren Solomon/Lior Friedman
Not all cancer mutations are drivers; Target Accelerator takes aim at identifying the ones most important to human disease
By Leah Eisenstadt, Broad Communications

If you walked into a cancer clinic ten years ago as a newly diagnosed patient, you’d likely get “standard of care” treatment based on the location of the cancer in your body and its stage. Make that same visit today and your physician may instead begin with a close look at your tumor’s DNA.

The emerging focus on precision medicine urges a tailored approach to therapy that aims to give the right medicine to the right patient at the right time. Several cancer drugs are now available that attack tumors harboring specific mutations in well-known oncogenes, and patients with those tumors can benefit now from the early advances in precision medicine.

Imagine, however, that you’re one of the many cancer patients whose molecular testing ends in frustration. Your physician returns with good news and bad news: your tumor has six mutations in well-known cancer genes, but unfortunately yours are not the usual suspects. The specific genetic misspellings in your tumor have never been seen before and cannot be interpreted. In scientific parlance, they are “variants of unknown significance.” Your tumor’s mutations could be driving your cancer, making it amenable to a therapy that targets those genes, or they could be completely benign genetic changes, known as passenger mutations because they are simply along for the ride, so treating you with a targeted therapy could do more harm than good. Despite having your tumor’s unique genetic information in hand, your physician has no way to interpret the rare variants and can’t use your results to make treatment decisions.

In oncology today, there are relatively few tumor mutations that are well enough understood to impact clinical care. Part of the problem is that most of the genetic variants found in tumors are rare, with some variants found in only a single patient in the world, and the roles of these unstudied variants remain a mystery. In addition, the traditional model of studying the function of a mutated gene involves many years of resource-intensive experimental work, an approach that has not kept pace with the recent discovery of scores of cancer mutations through efforts like The Cancer Genome Atlas project.

Several years ago, researchers in the Cancer Program at the Broad Institute of MIT and Harvard recognized the need to generate large-scale functional maps of the cancer genome to better understand the disease, inform clinical decision making, and aid the search for new cancer medicines. The researchers initiated an effort known as “Target Accelerator” to develop new ways of assessing the function of disease variants in a high-throughput way. With the broad goal of improving genome interpretation in cancer, the effort is now starting to bear fruit with two new scientific papers that illustrate the potential of this approach, especially in elucidating cancer’s uncommon mutations.

“A core challenge for researchers around the globe is to learn how to interpret the biological meaning of the many rare genetic variants found in cancer and other illnesses,” said Jesse Boehm, associate director of the Cancer Program. “We thought it might be possible to study the function of disease variants in a systematic way, but proof-of-principle experiments were lacking. So we took on the challenge.”

A first study of function at scale

In the first findings to come out of the Target Accelerator effort, a team led by Cancer Program researchers William Hahn, Jesse Boehm, and Gaddy Getz developed a scalable, systematic approach to study the function of genetic variants associated with an array of cancers. They analyzed existing DNA sequence data from more than 5,000 tumors from 27 different types of cancer, choosing 474 mutations to investigate further. With the help of the Broad’s Genetic Perturbation Platform (GPP), they generated cells in which the activity of these mutant genes was turned up, or “overexpressed.” They used model systems originally developed by Hahn and Boehm that contain some, but not all, of the mutations required to turn normal cells into cancer cells. The team then overexpressed the 474 mutant genes to determine which ones finished the job, causing tumors to grow in mice. By pooling cells that each overexpressed a different mutation and tracking their relative abundance, the researchers were able to test the tumor-forming potential of many mutated genes at once. In a complementary set of experiments, the team turned to changes in gene activity, also known as gene expression, to interpret the function of mutations.

“This is the first experiment of this scale to differentiate the functional consequences of tumor mutations, shedding important light on the myriad rare mutations that are uncovered through clinical and research sequencing,” said Hahn, senior author on the paper and institute member of the Broad who is also a medical oncologist and a professor at the Dana–Farber Cancer Institute and Harvard Medical School.

Appearing in Cancer Discovery, the results revealed a dozen new functional mutations that appear to underlie cancer (many found only once in the set of 5,338 tumors), including rare variants in the well-studied cancer gene KRAS that had previously been overlooked and several mutations in genes that are just now being linked to cancer: POT1 and PIK3CB.

“We’ve shown that as physicians, we can’t dismiss the rare mutations just because they’ve never been seen or studied before,” said Eejung Kim, a first author on the paper and physician/scientist-in-training in Hahn’s lab.

A closer look at lung cancer

A second study to come from the Target Accelerator effort and appearing in Cancer Cell focused on lung cancer and was led by Boehm and Broad institute member Matthew Meyerson.

“Lung adenocarcinoma has one of the highest rates of mutation among cancers, so it’s critical that we take a systematic approach to differentiating driver mutations from passengers if we want to one day target these rare variants therapeutically,” said Meyerson, also a professor of pathology at Dana-Farber Cancer Institute and Harvard Medical School.

Many of the mutations in lung tumors are rare and unstudied. Even for patients with alterations in the frequently mutated gene EGFR, which can be targeted with the drug gefitinib (Iressa), roughly one-third of those mutations are variants of unknown significance, so the drug cannot be prescribed.

The researchers selected nearly 200 mutations in 53 genes from patient data to functionally profile through three complementary assays. The first relied upon a gene expression-based method that built upon earlier work from the Broad’s Connectivity Map (CMap) team to determine which mutations impact gene function. Using the L1000 assay, an inexpensive, bead-based gene expression monitoring system developed by the CMap team, they could generate a molecular fingerprint of expression changes due to each mutant gene and its normal counterpart.

The team developed a novel algorithm to analyze the data termed eVIP (expression-based Variant Impact Phenotyping), pioneered by co-first author Angela Brooks, now an assistant professor of biomolecular engineering at University of California, Santa Cruz. The algorithm analyzes expression signatures generated using the L1000 assay in lung cancer cells in which mutant genes are overexpressed (again, with the help of Broad’s GPP). With eVIP, the strength of changes in each mutation’s expression fingerprint indicates whether the variants are passengers, gain-of-function mutations, or loss-of-function mutations.

“The approach is exciting because for the first time in a single assay, we can profile the function of any mutation in a set, regardless of each gene’s particular function,” said Alice Berger, co-first author on the paper, postdoctoral researcher at the Broad, and instructor of medicine at Harvard Medical School and Dana-Farber Cancer Institute, who will soon be an assistant member at Fred Hutchinson Cancer Research Center. “We’re using the expression profile as a universal sensor of function, so we can characterize many, many genes at one time.”

As expected, many of the mutations they tested appeared to be passengers. However, among the driver mutations they uncovered in the EGFR/RAS pathway were not only famous oncogenes, but also many rare ones (some only seen in one patient, ever) that seem to have the same function as the common mutations. The results provide more evidence that rare mutations can be clinically important.

An engine of genome interpretation

These studies and others from the Target Accelerator effort represent an engine of genome interpretation that cuts across the entire Broad community to leverage many parts of the institution, including the Genetic Perturbation Platform, the Connectivity Map team, the Proteomics Platform, the Imaging Platform, and the Genomics Platform.

“These are uniquely Broad projects because they build a web of people, technologies, and ideas that existed, but that needed to be assembled and applied to a particular disease output,” said Boehm. “The success of these efforts will help us plan Target Accelerator’s next phase, in which we’ll incorporate other forms of genetic perturbation, new bioassays, and single-cell sequencing in a systematic way.”

The broad goal is to improve precision medicine going forward, which will rely on more experimental data and improved computational methods to predict the impact of mutations. “I hope that by the time I’m treating cancer patients, we have a more comprehensive functional survey of cancer mutations,” said Kim. “Giving patients meaningful information on their tumor’s particular genetic makeup holds the potential to transform the way we treat and diagnose this devastating illness.”