Surveying cells, one at a time 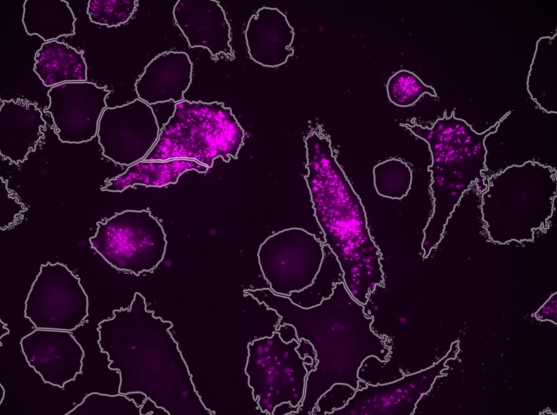 When studying any kind of population — people or cells — averaging is a useful, if flawed, form of measurement. According to the US Census Bureau, the average American household size in 2010 was 2.59. Of course, there are no homes with exactly 2.59 people. By inspecting each house individually, one would see some homes occupied by a single individual, and others by large families. These extremes get lost when values are averaged over a population.

A similar masking of information happens when cells are studied in large numbers. Researchers have typically taken top-down approaches, watching how things change in thousands or millions of cells and trying to infer what happened within each one. New technological advances, however, are giving scientists powerful, high-resolution genomic tools to monitor individual cells, offering an unprecedented view of cellular function and circuitry.

To assess the potential of these new tools, a team of scientists at the Klarman Cell Observatory at the Broad Institute recently completed an effort to read, or sequence, all the RNA — the “transcriptome” — in individual immune cells. Whereas DNA in a cell’s genome represents its blueprint for making the building blocks of cells, RNA is more like the cell’s contractor, turning that blueprint into proteins. By sequencing RNA in single cells, scientists can obtain a picture of what proteins each cell is actively making and in what amounts. “Single-cell sequencing is a way to look at the diversity of cells at the individual cell level,” said Hongkun Park, Broad associate member and a co-corresponding author on the new study, which appears in the May 19 online issue of Nature.

“We decided to approach the problem in a new way,” said Alex Shalek, a postdoctoral researcher at Harvard and co-first author. “We wanted to look at how every single cell responds, then look for patterns in the behavior that would tell us something about how cells make decisions.”

A collaboration among scientists from the Klarman Cell Observatory and the laboratories of Park and Broad core member and co-corresponding author Aviv Regev, the study was an effort to not only pilot single-cell techniques, but to also test whether meaningful biology could be uncovered with this approach. "This work shows how the Observatory lets us explore new directions in cell circuitry, bringing together experimental biologists, computer scientists, and physicists,” said Regev. “The Observatory can then also help our broader community use the same technology to address circuits in many other cell types.”

By capitalizing on the unique resources at the Broad — statistical and computational expertise; deep knowledge of the cellular model of immune response; and tools and expertise from the Broad’s Genomics and Imaging Platforms, among others — the research team successfully mined RNA sequencing data to reveal surprising diversity within a single cell type.

“Our team shared a vision to build an understanding of biology from the ground up,” said Shalek. “We thought it would be fascinating to figure out what cells do by asking them to tell us, rather than trying to guess.”

The Broad researchers sought to adapt a recently developed technique for single-cell RNA sequencing, known as SMART-Seq, and apply it to a model of immune cell response well-studied by Regev, Broad senior associate member Nir Hacohen, and their fellow researchers. In this model, immune cells known as bone-marrow derived dendritic cells (BMDCs) are exposed to a bacterial cell component that causes the cells to mount an immune response.

Working with scientists in the Broad’s Genomics Platform, notably research scientists Joshua Levin and Xian Adiconis, the team established the SMART-Seq method for use in their model system, using it to gather RNA sequence data from 18 BMDCs in this pilot phase. Levin had previously fine-tuned RNA sequencing methods for low-quality or small-sized samples (see his recent Nature Methods paper on that work), and his group’s contributions were instrumental in this new work.

Because each cell contains such a tiny amount of genetic material, it must be copied, or amplified, many times over, introducing noise into the system. Computational biologists on the team led by Regev, including co-first author and postdoctoral researcher Rahul Satija, developed analytic methods to assemble each cell’s transcriptome and uncover meaningful patterns in the noisy data.

The team first analyzed the data for differences in expression, or activity, of various genes among the cells, seen as alterations in RNA abundance. Although they were working with a single cell type — BDMCs — they did expect to see some variation in gene expression as cells activated various pathways during their immune response. But the team discovered that some genes varied greatly, with 1000-fold differences in the expression levels between cells. “We went after a narrowly defined cell type that has a specific function that we think of as being very uniform,” said Shalek. “What we saw was striking — a tremendous variability that wasn’t expected.”

A cell’s transcriptome indicates more than genetic abundance. It can also reveal what versions of genes are being transcribed. It is well known that genes can be processed into RNA differently through so-called “alternative splicing,” producing unique proteins. Based on measurements taken from large populations of cells, scientists had thought that cells used both versions of a given gene. But by looking at individual cells, the researchers discovered that cells use one version or another preferentially — not both.

Importantly, the variation they observed wasn’t random; Satija and his fellow researchers were able to discern patterns in the data. “I think that variability in and of itself is interesting, but not incredibly useful,” said Satija. “But variation with structure is very powerful, because it can help identify biological relationships in this sea of heterogeneity.”

Analyzing the structure within the variation, the team found that the BDMCs they studied actually fell into two subpopulations, representing different developmental states of the cells as they responded to the bacterial challenge. They also saw variation in intracellular circuits used by the cells in the same developmental state, demonstrating the dynamic nature of cells.

The team went to great lengths to validate their findings with imaging work and animal models, something that prior studies of single-cell RNA sequencing lacked. “This work was the realization of something that people had hoped to do for a very long time,” said Shalek. “We had to ensure that our technical steps didn’t introduce biases that would distort the biological signals.”

In addition, this work demonstrates the power of single-cell RNA sequencing to reveal cellular diversity without using a genetic perturbation. “We took cells we thought were completely identical,” explained Satija, “and discovered how the naturally occurring variation between them could teach us something biologically.”

The biological insights from this effort, enabled by the diverse expertise and resources of the Broad, represent a first step in fulfilling the promise of unbiased, single-cell approaches to uncover biology. “It’s very rare to have people in one place who can generate this kind of data, analyze it, and validate it,” said Satija. “This collaboration is a very strong merging of a lot of different forms of expertise from many disciplines, and it’s been very successful.”

This new study is one of the first that tried to derive biological results from single-cell RNA-Seq data, rather than simply doing a technical evaluation. The scientists are now working to scale up their studies of single-cell RNA sequencing, and they have received a flood of requests from colleagues wanting to collaborate. Satija explains, “We hope that this is going to become a very broadly applicable technology, as it is applied to not only greater numbers of cells, but also for a very wide variety of tissues.”