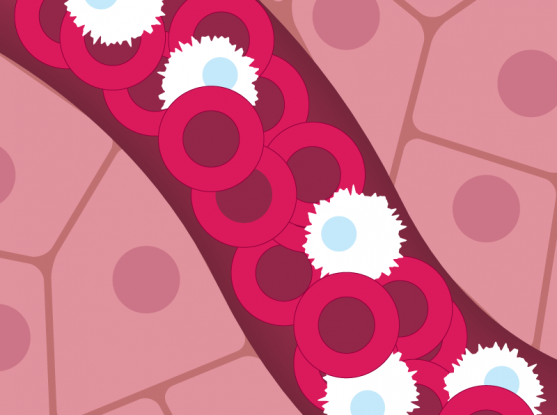 Two teams show how inherited mutations can increase a person’s risk of accumulating sporadic mutations in their blood stem cells.

As people grow older, certain genetic mutations in hematopoietic stem cells (HSCs) — which give rise to blood and immune cells — can eventually cause cancer or predispose people to cardiovascular disease.

Now, two teams of scientists at the Broad Institute of MIT and Harvard, Massachusetts General Hospital, Boston Children’s Hospital, and Dana-Farber Cancer Institute have each discovered a set of inherited gene variants that increase the risk of accumulating these mutations in HSCs over people’s lifetimes. These mutations lead to one of two age-related blood disorders: myeloproliferative neoplasms (MPNs) and clonal hematopoiesis of indeterminate potential (CHIP). People with MPNs have too many mature red and white blood cells and platelets, which predisposes them to leukemia. CHIP, which affects nearly 10 percent of people over 70 and increases one’s risk of cancer and heart disease, results in an excess of blood stem cells.

The findings, described in two papers published in Nature, show that some of the inherited gene variants boost blood stem cell self-renewal, potentially resulting in an expanded pool of blood stem cells. This increases the risk of blood cells accumulating harmful mutations over time that then cause MPNs or CHIP.

“The exciting part is that for patients with either disorder, we’re starting to gain insight into why these disorders are occurring and what increases one’s risk for them. Our hope is that eventually these findings may suggest ways by which we can mitigate that risk,” said Vijay Sankaran, an associate member of the Broad Institute, an associate professor of pediatrics at Harvard Medical School, and interim chief of hematology and oncology at Boston Children’s Hospital and the Dana-Farber Cancer Institute.

“If you can prevent the onset of these age-related mutations before they occur, you can potentially have benefits for a whole host of conditions, from cancer to cardiovascular disease,” said Pradeep Natarajan, an associate member of the Broad Institute, director of preventive cardiology at Massachusetts General Hospital, and assistant professor of medicine at Harvard Medical School.

Over the last 15 years, researchers have discovered somatic mutations — acquired during a person’s lifetime — that are linked to MPNs. But MPNs tend to run in families so Sankaran wanted to know whether any germline mutations — those that are passed from parents to children — affected MPN risk.

In one of the new studies, Sankaran and his colleagues — including study co-first authors Erik Bao, Satish Nandakumar, and Xiaotian Liao — studied data from 2,949 MPN cases and 835,554 controls from three large cohorts. They identified 17 genetic variants that put people at risk of MPN, including seven that had never been identified before. Many of the variants fell in parts of the genome that don’t encode proteins but rather regulate genes. So the researchers carried out additional experiments to determine the biological consequences of the variants.

“Once we started looking at what these variants were doing, it quickly became evident to us that they were all involved in blood stem cells,” said Sankaran. “And this really gave us the opportunity to learn more about the biology of HSCs.”

The team found that people with the risk variants, even before they’ve developed an MPN, have more HSCs, and more turnover of HSCs, than people without the variants. In studying isolated HSCs in the lab, the researchers made a similar observation — HSCs with one risk variant, for instance, produced nearly three times as many cells after seven days of growth.

“We don’t think most of these risk variants are actually making HSCs accumulate more mutations,” said Sankaran. “They’re most likely increasing the overall pool of stem cells which affects the likelihood of one cell eventually acquiring a mutation like JAK2 V617F.”

But that’s just a hypothesis, Sankaran admits. He’s planning future studies to better understand the exact function of each risk variant and whether any increase the rate of mutations in HSCs.

For now, he says knowing the new risk genes — which explain 18.4 percent of the familial pattern seen in MPNs — may help determine who is at highest risk of an MPN. Sankaran hopes this insight may someday lead to ways to decrease that risk.

CHIPping Away at Stem Cell Biology

The other new study focused on CHIP, which is marked by the accumulation of HSCs and predisposes people to blood cancers, heart attacks, and strokes, raising people’s risk of death by 40 percent.

“We want to understand the predisposing factors to CHIP and, ideally, the ultimate pathogenesis of the disorder,” said Natarajan, senior author of the CHIP study.

Natarajan, study first author Alexander Bick (now at Vanderbilt University Medical Center), and their collaborators turned to genetic and health data from 97,691 people that had already been collected through the National Institutes of Health’s Trans-Omics for Precision Medicine (TOPMed) program. In this cohort, 59 percent of the people are of non-European ancestry, a higher percentage than most cohorts.

The researchers identified 4,229 people with CHIP in the TOPMed database. By comparing the genomes of these people with those of controls, they discovered three regions of the genome associated with CHIP, one of which was newly linked to the disorder. The variant was seen only in people with African ancestry and was near a gene called TET2. The variant, the researchers found, decreased levels of the TET2 protein. In blood collected from 16 African Americans who had one copy of the genetic variant, TET2 mRNA levels were lower than usual.

When the researchers removed the Tet2 gene from mice in the lab, the animals had increased self-renewal of HSCs, leading to more stem cells. Similarly, when the team turned down expression of TET2 in isolated human HSCs, the cell colonies grew more quickly.

“We don’t think the acquisition of mutations alone is sufficient to cause CHIP; lots of people have a mutation in a cell or a couple of cells and the cells never become more widespread,” said Natarajan. “But when you have a variant like this promoting cell growth, that makes a cell with a mutation more aggressively expand. Additionally, an increased number of cell cycles may also facilitate the acquisition of CHIP mutations.”

Natarajan says follow-up work is needed to understand the exact effect of TET2 on HSCs and, ultimately, how it contributes to increased risk of CHIP.

Support for the MPN study was provided in part by the National Institute of Diabetes and Digestive and Kidney Diseases, a Howard Hughes Medical Institute Medical Research Fellowship, the Claudia Adams Barr Program for Innovative Cancer Research, the New York Stem Cell Foundation, the MPN Research Foundation, and the Leukemia & Lymphoma Society.