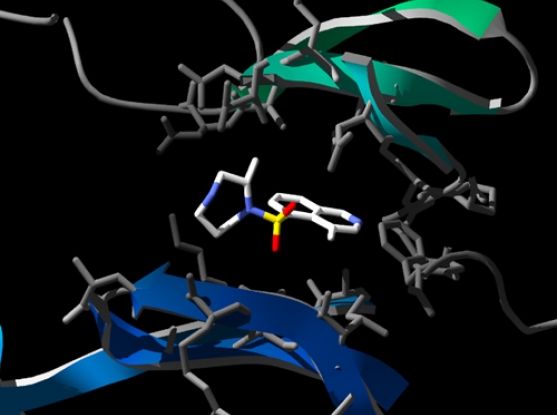 For most cells, more than two copies of the entire genome can be a telltale sign of cancer. But for megakaryocytes – bone marrow cells that can give rise to thousands of platelets – having several genomic copies is normal. In their healthy state, these cells can harbor as many as 64 copies of the full complement of human DNA, a state known as polyploidy. When the normal development of megakaryocytes goes awry, they can lose this unique feature and start down the path toward a rare form of cancer known as acute megakaryoblastic leukemia (AMKL). Researchers can spot these cellular changes, but the underlying causes – and how to reverse the course of disease – have been difficult to pinpoint.

In order to treat AMKL in patients who do not respond to current therapies, researchers need a protein target at which to take aim. A new effort at the Broad Institute draws on the strengths of a large number of the Broad’s resources and platforms to identify such targets and narrow in on suitable drugs to pursue them. The study of AMKL has been one of the first projects to which this highly integrated approach has been applied, and findings point to the potential of a drug candidate currently under clinical investigation for the treatment of other forms of cancer. The results of this effort, which combined the biological expertise of researchers at Northwestern University Feinberg School of Medicine and the power of the Broad Institute’s Proteomics Platform, RNAi Platform, Chemical Biology Program, Imaging Platform and more, appear in the most recent issue of the journal Cell.

“This project addresses an unmet medical need and shows the power of integrating approaches and different areas of expertise,” said Monica Schenone, a research scientist in the Broad’s Proteomics Platform and an author of the paper.

In AMKL, megakaryocytes divide unchecked and fail to produce their characteristic extra genomic copies. Therefore, the research team was interested in finding compounds that could reverse both of these defects. The researchers treated cultured AMKL cancer cells with 9,000 different compounds from the Broad’s collection, and looked for changes using software such as CellProfiler, a computer program developed by the Broad Institute’s Imaging Platform that can “learn” to detect cells with extra DNA content. They then followed up on several of these compounds, narrowing in on a compound known as dimethylfasudil (diMF), which showed signals of steering the cells back toward normal, healthy maturation.

Although the effects of diMF sound promising, the compound itself has many properties that would make it an unacceptable drug. The research team set out to pinpoint how diMF has its positive effects, with the goal of finding a safer, more selective compound that hits the same critical target. To do so, the team set up several experiments. In one, they used RNA interference, molecules of RNA that can dial down individual genes. The diMF compound was suspected to inhibit one or more of a class of proteins called kinases, so the team used RNAi to suppress genes for kinases. They looked for genes whose suppression mimicked the interesting effects of diMF or made cells more sensitive to the effects of a low dose of diMF. These genes were listed as candidates likely to be directly involved in diMF’s activity.

“We had performed similar RNAi screens, but in cases where we already knew the target of the drug. The known target genes often scored very well so we were eager to try to use this approach to find an unknown target gene,” said David Root, director of the Broad’s RNAi Platform and a senior author of the paper. “This project combined multiple approaches to converge on the most likely targets of a small molecule, with experts on each experimental strategy working together to find out how diMF achieved polyploidization and differentiation of AMKL cells.”

In another set of experiments, researchers in the Broad’s Proteomics Platform identified proteins that bind to diMF in the AMKL cancer cells. They found 68 unique proteins, all of which had an affinity for the compound. In a third set of experiments, the team specifically looked at the binding of kinases – enzymes that play important roles in a variety of cellular functions.

Each of these experiments produced a long list of potential targets. To winnow this list down to the most promising, the team drew upon the computational expertise of the Broad’s Chemical Biology Program. The group combined the data and mapped out how proteins on the lists may be interacting. This allowed the researchers to compare results and generate a short list of prospective targets.

“These methods are general – for any compound discovery project, we should be able to triangulate on target candidates by applying data integration and network analysis across different lines of evidence,” said Paul Clemons, director of computational chemical biology in the Broad Institute’s Chemical Biology Program. Clemons is also an author of the paper.

From the resulting list, the researchers narrowed in on Aurora A kinase (AURKA), an enzyme thought to play a role in cell division and cell growth but not previously known to play a role in megakaryocyte development. Several compounds that inhibit AURKA have been developed, including a highly selective one known as MLN8237. MLN8237 is currently in clinical trials for the treatment of many forms of cancer, including other kinds of leukemia. The current study, however, is the first to suggest that the drug may be effective against AMKL. Patients with certain forms of AMKL, including one associated with Down syndrome, respond well to current therapies, but others, particularly adults with non-Down syndrome AMKL, have very poor prognoses – most relapse within one year of treatment.

“What’s most exciting about this project is that it makes advances both in basic science and in translational medicine. Very little is known about what causes the switch from a progenitor cell to become polyploid and differentiate,” said John Crispino a professor in hematology and oncology at Northwestern University Feinberg School of Medicine and a senior author of the paper. “We now have a wealth of information about what regulates this pathway. And we’ve also discovered targets and compounds that could potentially be therapies for this leukemia.”

Finding a compound currently under clinical investigation was a welcome result for the researchers. “We were unbiased, methodical and systematic,” said Schenone. “Our integrated method allowed us to identify the mechanism of action of a compound, and to find that for that particular protein there was a specific compound already in the clinic but for a different indication was incredibly exciting. By coordinating all of these methods we were not only able to find the mechanism, we may also be able to see the benefits sooner than we expected.”