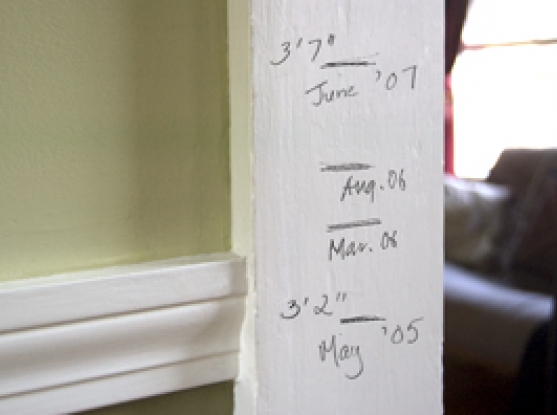 Height was one of the first traits recognized to be heritable — stature seemed to “run in the family,” with tall parents mostly having tall children and short parents mostly having short children. Scientists realized over a century ago that human stature, which can fall anywhere along a continuum, is not influenced by 1 or 2 genes, but many. Researchers today perform genome-scanning studies to hunt for the genes that determine height, but until recently those studies had only turned up a few dozen genetic links, accounting for less than 5% of height’s heritability.

Critics have claimed that the “polygenic” nature of height — and, by extension, many other common diseases and traits — means that the widely used, unbiased approach of genome-wide association studies won’t reveal much about the underlying biological processes. However, a new, exceptionally large study of more than 180,000 people identifies 180 genomic regions that influence adult height, the most yet identified for a single trait or disease. The variants explain 10% of the heritable differences in height among people and cluster in several biological pathways, providing evidence that the approach can reveal much about the biological processes that contribute to adult height.

The new findings, which appear in the September 29 advance online edition of Nature, result from work by an international consortium of more than 200 institutions, known as the GIANT (Genetic Investigation of Anthropometric Traits) Consortium and led in part by researchers at the Broad Institute of MIT and Harvard and Children’s Hospital in Boston. Other institutions that played key roles in the new work include Harvard Medical School, University of Exeter, deCODE Genetics, Erasmus Medical Center, Montreal Heart Institute, and University of Michigan. The collaboration takes advantage of the multitude of whole genome scans conducted worldwide. These studies, known as genome-wide association studies, or GWA studies, scan the genome for single-letter variants that are associated with a trait or disease.

The GIANT Consortium collected data from 46 GWA studies, which were originally conducted to study other traits or diseases, such as diabetes or cancer. “One of the things that GIANT and other consortia have been able to do is reanalyze existing GWA studies to achieve additional goals,” said co-senior author Joel Hirschhorn, an associate member at the Broad Institute and associate professor at Harvard Medical School and Children’s Hospital. “All of those studies collected height and weight, so the consortia can put data from many cohorts together and make new discoveries without having to generate any new GWA study data.”

By combining data from those studies, the researchers were able to discover hundreds of genetic variants associated with height, increasing the number of genomic regions, or loci, linked to height from 45 to 180. “As you get more and more people, you can discover more and more loci,” said Hirschhorn.

The study comes at a time of criticism in the field of genetic variation. Some suggest that association studies, no matter how large, merely supply a scattered list of variants, offering little insight into the biology of traits or diseases. But this large study suggests otherwise. “We’re not just throwing darts at the genome,” said Hirschhorn. “Groups of related genes become readily apparent with 180 loci that we couldn’t see with 45.”

The variants may not directly influence the trait or disease, but can serve as markers that help scientists highlight areas of the genome that may harbor the true players. As Hirschhorn described, “They provide clues to where the relevant genes are.” Many of the new variants were near genes known to play a role in abnormal skeletal growth, implicating those as potentially having a direct effect on height. For other variants, the relevant gene was not as obvious, so the team identified a handful of genes that each variant might be associated with. By doing this for many variants, they saw patterns emerge. Genes involved in certain biological pathways — for example, growth hormone signaling — came up over and over again. “The more loci you have,” Hirschhorn explained, “the easier it is to recognize those pathways.”

The loci identified in the study were not randomly scattered throughout the genome, but were clustered around genes from at least six different biological pathways, some not previously associated with height, offering new avenues for research. “Height was used as the example trait for why GWA studies wouldn’t uncover biology because it’s too polygenic,” he added. “Even for this highly polygenic trait, the genes are still clustering into biological pathways that you can recognize.”

He added that other loci uncovered by the study may represent new pathways relevant to height, but not yet recognized because scientists don’t yet have a full understanding of those pathways. “That’s the challenge lying ahead,” he said. “There’s probably all sorts of new biology that’s being hinted at here, but this is the first step to figuring that out.”

The GIANT Consortium also made discoveries in the current study that address another criticism of GWA studies. Although over 1,000 variants have been associated with human diseases and traits, only a tiny fraction of the heritability has been explained. To some, this “missing heritability” implies that for polygenic traits like height, hundreds or thousands of genes may be involved, making none of them particularly significant for treating disease or understanding the biology of traits.

But this study found that some loci harbor multiple variants that influence height. Some of the variants yet to be identified may, in fact, point to genes already recognized to be important. “It says that some of the missing heritability is right under your nose,” said Hirschhorn. “It’s in the very loci that you’ve already found, and if you just look into those loci more deeply, you’ll find more variation.” Because the variants found in this study point to the same genetic regions over and over again, he explained, “we may have actually identified a reasonable fraction of all the loci that there are to identify.”

Roughly 80% of the variation in height is due to heritable factors, and the genetic sources of most of that heritability are still unknown. To find all the variants that determine height, scientists will need to examine much larger numbers of samples from many more GWA studies. Those studies, however, only look for common variants that are present in more than 5% of the population and that have a significant impact on height. Some of the heritability might lie in common variants that have small effects on height, less common variants, or truly rare variants, and members of the consortium plan to take a variety of approaches such as sequencing studies to uncover more heritable factors.

"Complex traits such as height are proving even more complex than we had first thought,” said co-senior author Tim Frayling of the University of Exeter. “We will need even more powerful tools and different approaches if we are to understand fully the differences between individuals.”

Knowing the genetic determinants of height could eventually be useful for clinicians treating children with short stature, perhaps helping them to decide whether their extreme stature is more likely due to normal genetic variation, or instead due to another undiagnosed disease. To try to find additional genetic causes that are relevant to patients, Hirschhorn and his colleagues have designed a sequencing array to analyze 1,000 genes, including those at the 180 loci, in patients being seen for short stature.

But identifying all sources of heritability may not be the most important outcome of the GIANT Consortium’s work. “Predictive power is much less of a goal,” said Hirschhorn. As this study shows, the clues that the loci reveal about the biology underlying height open the doors to future research. “There’s interest in understanding the biology of a basic human process, and the possibility of novel therapies for kids with severe short stature. Then there’s the question of genetic architecture of polygenic traits,” added Hirschhorn. “What happens when you do these large GWA studies? Is it worth trying to get up to that number of loci? We think, yes. By finding a lot of different loci, you can continue to make important progress.”

From the Broad Institute: Genes linked to height no longer in short supply