Nearly everyone knows someone whose life has been disrupted by cancer. Indeed, in the United States alone, the lifetime probability of developing cancer is as high as 1 in 2 for men and 1 in 3 for women. Even more troubling is the blunt-edged nature of current cancer treatments: many drugs are sledgehammers rather than scalpels. Although they can be effective in curbing tumor growth, that same property can make them difficult to tolerate because of the damage they also do to normal body cells. Clearly, there is an urgent need for improved cancer therapies that eradicate tumor cells without injuring innocent bystanders along the way. But this requires that we first identify the genetic steppingstones that lead to cancer.

Cancer usually begins with a genetic alteration, often an inadvertent DNA “typo” in an otherwise normal body cell. If several mutations accumulate in this cell’s DNA, they may accidentally shift the cell into overdrive, allowing it to endlessly replicate and develop into an invasive tumor. The complexity of designing specific cancer therapies emerges from the different combinations of mutations that can give rise to cancer. In fact, cancer is so heterogeneous that we might more aptly describe it as a collection of distinct, yet related diseases. Accordingly, therapies may prove more efficacious if they are tailored to the type of cancer in a particular patient.

This targeted approach requires a detailed and comprehensive knowledge of the genetic foundations of all cancers. As a step toward this ambitious goal, my colleagues and I at the Dana-Farber Cancer Institute and at the Broad Institute have begun to catalog all the cancer-related mutations that involve single base-pair changes and small insertions or deletions. This is just one facet of the Cancer Genome Resequencing Project, a massive collaboration to pinpoint the mutations that expose a tumor’s underbelly. Such mutations represent prime targets for new cancer drugs and will also help us identify the patients who will best respond to particular therapies based on the genetic makeup of their tumors (an approach termed “pharmacogenomics”).

Sequencing DNA from patients’ tumors can reveal cancer-specific mutations, but it is still technologically impractical to analyze all of the genes in the human genome for every tumor sample. Therefore, we have begun with a small group of the usual genetic suspects: a family of genes called tyrosine kinases. These genes encode proteins that signal to the cell nucleus and instruct the cell to divide. Normally, these messages are tightly regulated and dispatched only when it is appropriate. However, genetic mutations can remove such constraints, allowing kinases to act indiscriminately and to send constant growth signals to the nucleus. 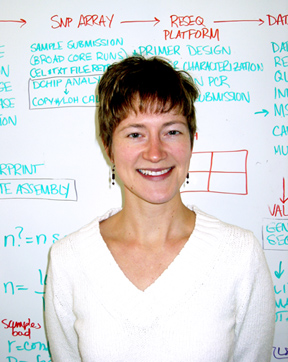 We began our search, nicknamed the “Kinome Project,” by looking for mutations in tyrosine kinase genes in lung cancer patients and discovered several in the Epidermal Growth Factor Receptor (EGFR) gene. These mutations were localized to its signaling arm, known as the kinase domain. Meanwhile, independent clinical trials were underway to study gefitinib, a new, targeted drug that inhibits the signaling activity of EGFR. However, only a handful of patients enrolled in the study were actually helped by the drug. When we examined the DNA from all of the patients’ tumors, we found the same crop of EGFR mutations, specifically in the group that benefited from treatment. Together with parallel studies at the Massachusetts General Hospital, our work suggests that EGFR mutations can serve as reliable predictors of patient response to gefitinib and a related inhibitor, erlotinib.

The burning question though, is whether these EGFR mutations are the true causal workhorses, prodding cells to become cancerous, or simply opportunistic mutations with minimal clout. To address this question, we inserted the mutant EGFR genes into normal cultured cells, which rendered the corresponding proteins hyperactive, even in the absence of appropriate stimuli. Such frenzied signals triggered the familiar visage of cancerous cells: unrestrained and inappropriate growth leading to tumor formation. Therefore, we can conclude that genetic disruptions in its signaling ability convert EGFR into a cancer-promoting gene. Different mutations in its kinase domain can elicit distinct responses to the inhibitory drugs gefitinib and erlotinib, which indicates that these Achilles’ heels may also be helpful for tailoring therapies to individual patients.

We are continuing the “Kinome Project,” focusing on lung tumors and many other tumor types in our search for cancer-causing mutations. We are also expanding our gene list to include other enzyme families, but the real breakthrough will occur when the cost of sequencing drops to the point at which it becomes feasible to sequence more, or perhaps all, of the genes in the human genome for each tumor sample. My colleagues and I anticipate that a future Spotlight will describe a complete understanding of the genetic alterations that underlie cancer, enabling targeted therapies to be customized on a tumor-by-tumor basis.