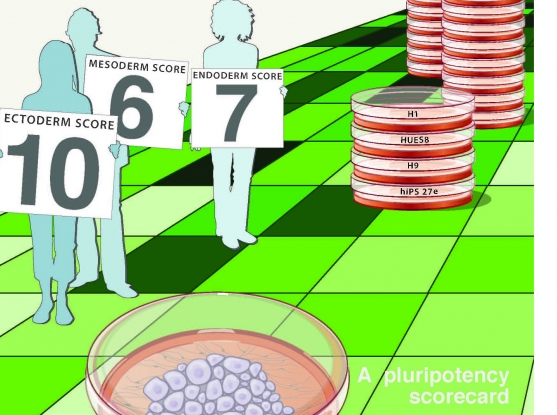 For years, scientists have been debating how closely related reprogrammed, inducible stem cells, or iPS cells, are to native embryonic stem (ES) cells. The debate goes beyond the academic as researchers worldwide seek to apply iPS cells, derived from adult cells as opposed to embryonic sources, in biomedical research.

Scientific studies comparing the similarities and differences between the two stem cell types have been conflicting and inconclusive. Seeking to settle this debate, researchers at the Broad Institute of MIT and Harvard, and Harvard’s Department of Stem Cell Biology, devised a tool incorporating a genomics-based analytical approach. Their findings are reported in a paper published in the February 4th issue of the journal Cell. They chose to compare a set of 20 ES cell lines with 12 iPS cell lines assessing epigenetic patterns of each. Epigenetic changes, which include DNA methylation, influence whether genes are turned on or off.

“For each ES cell line, we looked for DNA methylation patterns and gene expression patterns at particular gene locations, noting each line’s patterns as well as the pattern across all lines,” explains paper co-author Alexander Meissner, assistant professor at Harvard University and senior associate member at the Broad. Meissner and colleagues have been studying the epigenetic landscape of stem cells to learn more about their basic biology. “This gives one a span of what you would expect to see in any ES cell line.” The team compared the iPS cell lines with the ES cell line reference looking for areas where they fall into the same range or where they differ. In this way, the team calculated a deviation scorecard for all iPS cell lines.

Meissner and colleagues found a high degree of variation between the iPS cell lines. “But, we also see a fair amount of variation in the same regions of ES cell lines,” he says. “Rather than saying iPS are different than ES cells, we conclude that they are both variable, typically in the same areas of the genome.” That helps explain the confusion from earlier studies, none of which included the large sample sizes used for this investigation. “If one investigated just one or two ES cell lines and compared these with a handful of iPS lines, one would inevitably find true significant differences,” says Meissner. “But if you look at the larger picture, you see a lot of ES cell lines have the same degree of variation in the same regions.”

With this information in hand, the investigators next wanted to be able to rate the iPS cell lines and provide some measure of their qualities and potential utilities. “We wanted to provide a method for actually choosing which iPS cell line to use,” Meissner explained.

Currently, the gold standard for confirming pluripotency, or the ability of a stem cell to differentiate into any cell type, is to inject the iPS cells into immunocompromised mice and derive a teratoma. A teratoma contains embryonic cells capable of forming into cells of all types. That teratoma can be assayed to see whether its cells contributed to all germ layers and generated a diversity of cell types. This method is not without criticism. A December 2010 paper in Nature Methods recently detailed its limitations. “We find that with this method we could not determine which iPS cell lines were better than others,” adds Meissner, whose comments also appeared in that paper.

Meissner’s team next applied a novel tool for testing pluripotency. ES and iPS cells were allowed to randomly differentiate for several days. Researchers then applied a quantitative method of counting how many mRNA molecules of a certain type each cell made. Counting copies of mRNA allows researchers to measure the activity of genes in cells, an exercise known as gene expression profiling. “We measured 500 very carefully selected genes and their expression levels in the randomly differentiated cells,” adds Meissner. These genes were selected to be representative markers of the three embryonic germ layers, different cell lineages and specific cell types.

The team created a scorecard for how well a particular cell line randomly differentiated by quantitatively counting the mRNA molecules. “This is a way to predict which cell lines would differentiate as expected,” says Meissner.

Every line had a different score. The only key experiment left was to see if the score meant anything. Meissner teamed with Kevin Eggan’s group at Harvard University to compare his predictions with the actual ability of the cells to differentiate into specific cell types. Eggan’s group tested the cell lines for their ability to generate motor neurons. They counted the number of neurons produced by each cell line after differentiation. The Harvard team reports findings on the neurodifferentiation efficiencies of iPS cell lines in a paper also published today in Nature Biotechnology.

Christoph Bock, the first author of today’s Cell paper and a computational postdoctoral fellow in Meissner’s group compared the actual rate of motor generation development with his predictions. The correlation was extremely high. Every iPS cell line predicted to do well in this assay made very nice motor neurons. The same is true for those iPS lines expected to be inefficient. “The implication is that we now have a fairly easy, quick way to assess and predict what a cell line would be good at producing versus other cell lines,” says Meissner.

With additional validation and optimization, this type of genomic assay has the potential to replace the classic teratoma assay as it is currently being used. “We hope this paper helps clarify some of the confusion in the field about iPS and ES cell lines by putting it into a bigger picture,” concludes Meissner. “This could be a useful assay but at a minimum it should start the process of developing more high-throughput assays using genomic technologies.”

From the BroadMinded Blog: Keeping score on stem cells