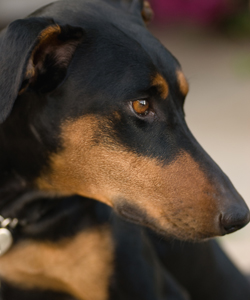 At first glance, a dog chasing its tail seems a harmless, if fruitless, pursuit. But for many dogs and their owners, the habit has a dark side, one that means endless hours and energy spent on the same task, to the exclusion of nearly all others. The cause, a type of compulsive disorder, can result in lack of sleep and even physical injury.

"It really is a hindrance for other normal activity and it often doesn't stop at bodily harm," said Kerstin Lindblad-Toh, Scientific Director of Vertebrate Genome Biology at the Broad Institute and professor at Uppsala University, Sweden. "So it's clearly not a good thing for the dog."

In dogs, such compulsive behaviors tend to run in certain breeds, and specific breeds exhibit characteristic behaviors. For example, Doberman pinchers usually lick or suck their flanks, often to the point of bleeding and skin infections. Other dog breeds, such as bull terriers, repeatedly chase their tails.

But there is a common thread. "They are all behaviors that are normal," said Elinor Karlsson, a postdoctoral researcher at the Broad Institute, "but they are being done way too much," and often to dogs' detriment. Moreover, such compulsive behaviors — known as canine compulsive disorder (CCD) — show some remarkable similarities to a human behavioral disorder called obsessive-compulsive disorder. So, a deeper understanding of the genetic basis of the disorder in dogs could lead to a clearer picture of the condition in both species.

Now, Lindblad-Toh, Karlsson and their colleagues, including Nicholas Dodman at Tufts University and Edward Ginns at the University of Massachusetts Medical School, have taken a first step toward that goal, identifying a gene associated with CCD. The work was published online December 22 in the journal Molecular Psychiatry.

The researchers explored the genetic basis of CCD by focusing on the Doberman pincher breed. The manifestations of CCD, including flank sucking, are not only common in the breed, but they are also easily distinguishable: dogs either do it or they don't. That facilitated the researchers' task of identifying affected dogs, making it possible to collect a sufficient number of DNA samples for study.

With roughly 150 affected and unaffected dogs, the researchers analyzed the DNA samples using a technique known as genome-wide association, which scans thousands of genetic markers — called SNPs or single nucleotide polymorphisms — throughout the genome to identify ones that are more common in affected dogs compared to in unaffected ones. Those high frequency markers act as signposts for genes and other key functional genomic elements that increase a dog's risk of developing the disorder.

"The nice thing is that we had one extremely strong peak and there's only one gene in that entire region...and our SNP sits right in the middle of that one gene," said Karlsson, a co-author of the Molecular Psychiatry paper.

The gene in question is called CDH2. Relatively little is known about how it works because the gene plays an important role early in embryonic development, which has made it difficult for scientists to learn about its functions later in life through studies of animal models. What is known is that the gene is part of a large family of genes known as cadherins, and this particular cadherin appears to act in the brain, specifically at the junctions between neurons known as synapses.

While the new data implicates a gene that acts in the right place to influence behavior, the researchers acknowledge there is still much work left to be done, both in extending their work in dogs and in beginning to apply it to humans. Nevertheless, there is hope that such efforts will lead to an enhanced understanding of behavioral disorders in both species.

From the Broad Institute:
Hair of the dog and In dogs, a shortcut to mapping disease genes