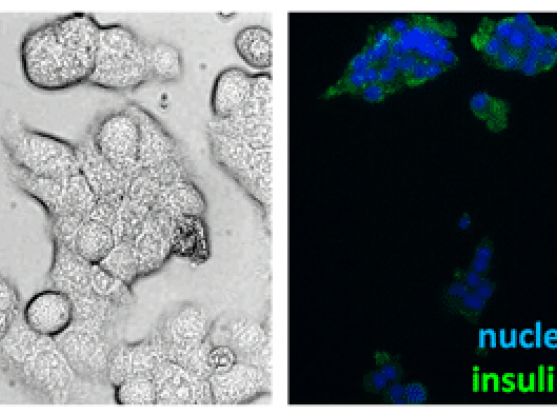 Researchers at the Broad Institute of Harvard and MIT have made an important first step in identifying a potential new avenue for developing novel diabetes therapies. Diabetes results when the body destroys its own insulin-producing beta (β) cells. Using a small molecule, the investigators could induce a low level of insulin production in alpha (α) cells, a pancreatic cell that normally does not make insulin. This finding suggests a possible alternative way of increasing β-cell mass and boost insulin secretion. These results were published in the August 9 edition of Proceedings of the National Academy of Sciences.

“We are looking into ways to use small molecules ultimately as drugs,” explained Bridget Wagner, Group Leader in Pancreatic Cell Biology and Metabolic Disease within the Chemical Biology / Novel Therapeutics Program at the Broad. Though the group is not seeking to develop new drugs per se, they are looking at ways to create more β-cells, protect those that already exist, and convert other cell types into functioning β-cells. The aim is to provide meaningful relief from the rigors of diabetes treatment and potential long-term complications of the disease process.

The idea to pursue the conversion from α- to β-cells came from examining their normal development into mature endocrine cell types. Both cell types are endocrine cells involved in keeping glucose levels in balance. While β-cells secrete insulin to lower sugar levels, α-cells secrete another protein hormone, glucagon, that boosts sugars. They come from a common endocrine progenitor. The transcription factor Arx drives α-cell development, while another, Pax4, causes β-cells to form. Transcription factors are proteins that turn on or switch off certain genes.

“This idea is about determining if we can go from one cell state to another using a small molecule without going back to the common progenitor,” said Dina Fomina-Yadlin, lead author of the paper and a graduate student working in core faculty member Stuart Schreiber’s laboratory at the Broad. Last year, this differentiation process from α- to β-cell was successfully proven in adult mice using the Pax4 transcription factor. “If we could find a small molecule or a number of them that would do something similar as the transcription factor approach of converting α-cells to β-cells, that would be closer to a therapeutic [treatment],” she said.

Starting from a screen of 30,710 compounds, investigators took a basic endpoint approach: look for signs of increased insulin production in mouse α-cells over a 3-day exposure period. They looked at stained α-cells to test for the presence of insulin, which are normally negative for insulin. One small molecule called BRD7389 emerged as a leading candidate shown to influence insulin production in these α-cells.

“BRD7389 resulted in 50-fold higher insulin gene expression in treated αalpha cells,” explained Fomina-Yadlin, although she noted that this is just 1% of the 1,000-5,000-fold expression level in normal β-cells.

The team has yet to pinpoint exactly how BRD7389 influences insulin production, but team members are homing in on the RSK protein kinase family as a contributing influence. Protein kinases are enzymes that act on altering the properties of specific proteins. When profiling BRD7389 in vitro against a panel of 219 different kinases selected to represent a subset of all human kinases, they noticed that the compound most strongly inhibited the entire family of RSK kinases. “But it is likely that other influences are involved as well,” she said.

To test the effects on human islet cells, they utilized the islet culture system developed at the Broad by co-author Deepika Walpita, Research Scientist in the Chemical Biology Program. “Mouse cell lines are great for screening but not for much more. When we saw such an interesting compound like BRD7389, we wanted to go straight to human islet cells,” said Wagner.

The cell culture system uses donor pancreatic islet cells deposited onto 96- or 384-well plates that are screened with test compounds. Investigators noticed that those islet cells treated with BRD7389 consistently led to an increase in insulin secretion. “But there are many different cell types in this mix – β-cells, α-cells, ductal tissue, fibroblasts—so it is not yet possible to say its action in human cells relates exclusively to influencing the α-cells to a β-like state,” cautioned Fomina-Yadlin.

The team intends to pursue further screens to identify other small molecules that can push the α-cell more closely to a β-cell. “It is conceptually difficult to imagine that one compound would get it the whole way,” Wagner said. “The idea is to find something that would help it get further.” Screens of this nature would couple BRD7389 as the base, with other small molecules riding piggyback to drive home the transdifferentiation process.