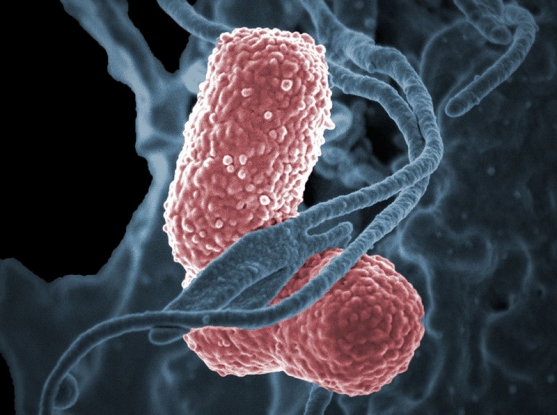 After an outbreak of lethal Klebsiella pneumoniae infections at a hospital in southeast Asia in 2016, it was clear that a dangerous new pathogen had emerged. K. pneumoniae is a leading cause of hospital-acquired urinary tract infections, pneumonia, and other illnesses, and many strains have become resistant to one or more antibiotics. Analysis of the 2016 outbreak later revealed that a drug-resistant strain called ST11 had gained “hypervirulence” — the ability to spread through the body faster and more easily and cause more severe disease.

Researchers at the Broad Institute of MIT and Harvard, Brigham and Women’s Hospital (BWH), and Massachusetts General Hospital (MGH) looked for signs of increased virulence in a different strain of K. pneumoniae — type ST258 — which circulates widely in the U.S. and Europe and is resistant to several antibiotics, including the “last resort” drug carbapenem.

In new work appearing in Nature Medicine, the researchers discovered that single mutations in the ST258 genome can alter the bacterium’s protective coating, or capsule, in unexpected ways, allowing K. pneumoniae to spread more easily to other organs or, surprisingly, to hide out within a patient’s cells and evade destruction by the immune system or drugs. These mutations arise often in K. pneumoniae strains, suggesting that the bacterium is an even bigger threat than previously known.

“A more complete understanding of how dangerous microbes like K. pneumoniae adapt and evolve can help us develop new diagnostic and treatment approaches to prevent infections from becoming untreatable,” said Broad core institute member Deborah Hung, an attending physician at BWH and professor at Harvard Medical School and MGH.

K. pneumoniae strains can vary in hundreds of spots along the genome, making it difficult to isolate any important changes linked to disease severity. The researchers instead started by studying the phenotype, or shape and function, of 54 ST258 strains collected from patients in the U.S., looking specifically for variations in the bacteria’s protective capsule, which is thought to be required to cause illness.

Two of these strains, collected from patients whose infections had spread to the bloodstream, had stronger-than-normal “hypercapsules” that the scientists suspected made the microbes more infectious. Analysis of the strains’ genomes uncovered a single mutation underlying the formation of hypercapsules, which led to infections that were more virulent in animal models than those caused by strains with normal capsules.

The researchers were surprised to find that strains from urinary tract infections did not produce a capsule at all. Although the capsule helps K. pneumoniae invade the body, it can also hinder infection by preventing the bacterium’s surface molecules from adhering to certain host tissues, such as the inner lining of the bladder.

In lab experiments, the team showed that the capsule-deficient K. pneumoniae strains were better able to invade and thrive inside bladder epithelial cells than capsule-normal strains, which might allow them to persist in patients for long periods. Amongst the 12 capsule-deficient strains, most of which were collected from patients with urinary tract infections, the researchers found 11 different mutations that are each sufficient to prevent capsule formation.

Because it only took one genetic change to alter K. pneumoniae so dramatically, the team suspected that they could find more drug-resistant ST258 strains with increased virulence. Co-author and Broad institute scientist Ashlee Earl led an effort to examine data from nearly 1,000 samples collected in the U.S. and Europe as far back as 2009, which revealed that 10 percent of strains from those samples harbored one of the capsule-altering mutations from their original analysis. “We suspected that was probably just the tip of the iceberg, because clinical sampling can miss subpopulations of a patient’s bacteria that have evolved a new capsule-altering mutation,” said first author Christoph Ernst, a postdoctoral researcher in the Hung lab.

To test that hunch, co-author and BWH infectious disease physician Lisa Cosimi led an effort to collect samples from BWH patients with K. pneumoniae urinary tract infections. The scientists observed that 20 percent of the patients carried either a hypercapsule strain or a capsule-deficient strain, or in one case, both.

It also was clear that the mutations could arise during the course of a patient’s infection. This suggests that a delay in treating patients who are colonized, but not sickened, by drug-resistant bacteria could give the microbes time to evolve into something more dangerous. “Any multi-drug resistant infection can turn virulent or even untreatable, if you give it enough time,” Ernst said.

The researchers say that screening a pathogen not only for drug susceptibility, but also for increased virulence and persistence, might give a fuller picture of its true threat. It also highlights the need for improved and novel antibiotic treatments. “Everyone looks for antibiotic resistance when studying the genetics of drug-resistant pathogens, but this study shows that’s not the only problem,” said Ernst. “We need treatments that can kill pathogens like K. pneumoniae not only in a test tube, but also in the complex intracellular niche where they sometimes hide.”

How Broad Institute is sharing research, data, findings, and technologies during the COVID-19 pandemic
Massive study reveals how “hypermutated" malignant brain tumors with many mutations escape chemotherapy and immunotherapy