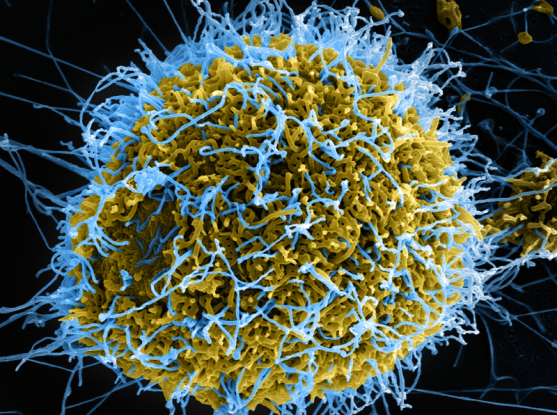 Ebola virus is one of the world’s deadliest pathogens, and scientists now report new details of how the virus alters the host immune response for its own benefit during infection. In a study published today in Cell, the researchers identified antiviral defense genes that the virus suppresses, and other genes the virus activates to potentially boost its replication in cells.

The scientists, from the Broad Institute of MIT and Harvard, MIT, the National Institutes of Health (NIH), Stanford University, and other institutions described how they sampled roughly 100,000 single immune cells from Ebola-infected rhesus monkeys at various stages of disease, and studied gene expression and protein activity in each of these cells individually.

The researchers were able to conduct the study — the first ever to sequence single cells infected with a BSL-4 level pathogen — by using a portable, low-cost technology for single cell RNA sequencing called Seq-Well, which the team adapted for use in a BSL-4 containment facility at the NIH Integrated Research Facility in Fort Detrick, Maryland.

The findings could potentially help researchers find more precise ways to target the immune system as a therapeutic strategy for infections. Dampening the overactive immune system with drugs such as corticosteroids is emerging as a way to treat some infections, including COVID-19, but those drugs often suppress the immune system in blunt ways.

“Treating the immune system in a more targeted way I think is where new therapeutics need to go,” said Aaron Lin, co-first author of the study who did the work at the Broad, in the lab of Pardis Sabeti, an institute member and professor at Harvard University, before starting his postdoctoral fellowship at Princeton University this year. “Figuring out which branches of the immune system should be targeted can be informed by single-cell studies of infection and other kinds of analyses.” 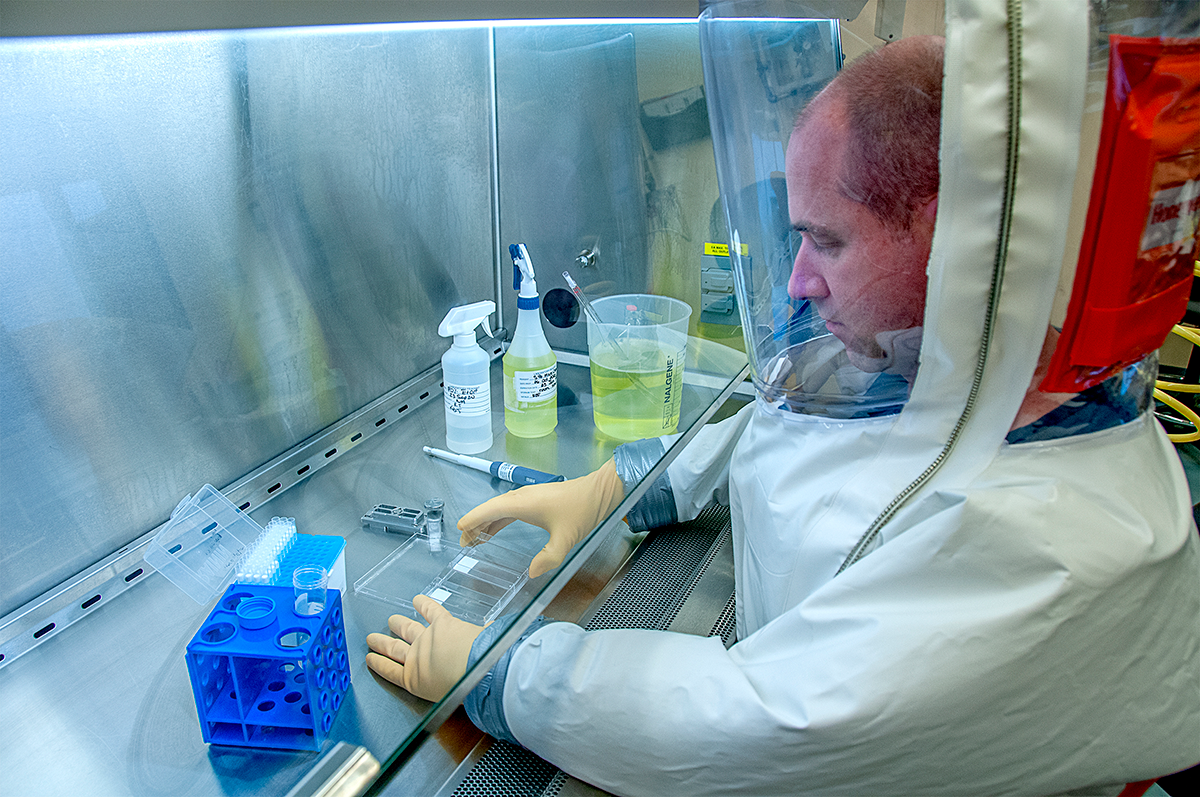 Richard Bennett of the National Institute of Allergy and Infectious Diseases (NIAID) worked in a BSL-4 lab at NIAID's Integrated Research Facility (IRF) in Fort Detrick, Maryland to study Ebola infection at the single-cell level. He is a senior coauthor of the study.  Credit: NIAID IRF

To learn about Ebola’s effects on the immune system, the team measured gene and protein activity across the genome in many types of both infected and uninfected immune cells, and monitored changes over the course of the disease. Many of the Ebola-induced changes involved monocytes, a type of immune cell that consumes infected cells and is important in battling Ebola.

The researchers found that within the first days of infection, subsets of conventional monocytes were replaced by unusual immature monocytes that were less able to present antigens to the immune system — a key step in stimulating effective immune responses. The virus had downregulated almost all of the genes involved in “class II” antigen presentation in these cells, which normally helps activate helper T cells and boost antibody production.

The researchers also analyzed individual cells with higher amounts of viral genetic material, which likely harbored virus in later phases of its life cycle. The team discovered that as the virus replicated in these cells, it suppressed the cells’ ability to produce interferon, a signalling molecule that triggers antiviral responses. The virus also boosted the activity of host genes that researchers think the virus uses to replicate in cells.

“Previous studies of Ebola virus in cells in a dish had generated hints of how the virus affects the immune system, but with more data across the whole genome and better resolution at a single-cell level from a natural infection over time, we got a more complete picture of what the immune system looks like during infection,” said Dylan Kotliar, co-first author of the paper and an MD-PhD student at Harvard Medical School and in the Sabeti lab at the Broad.

The senior authors of the study are Lisa Hensley of the National Institute of Allergy and Infectious Diseases (NIAID) and David McIlwain of Stanford University, who are also co-corresponding authors along with Kotliar and Lin.