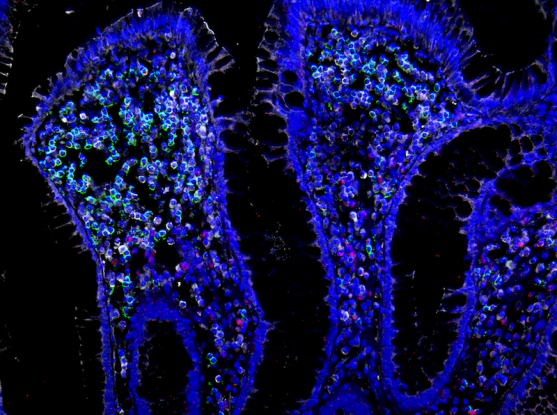 Inflammatory bowel diseases are chronic, painful disorders of the intestine that afflict roughly 1.5 million people in the United States. Yet the underlying mechanisms of these diseases, which include ulcerative colitis and Crohn’s disease, are not well understood. Even patients with the same diagnosis can have drastically different responses to treatment, and their symptom flare-ups can be difficult to predict.

A team led by researchers from the Broad Institute of MIT and Harvard, Massachusetts General Hospital (MGH), and MIT has now analyzed intestinal tissue from patients with ulcerative colitis and healthy individuals, generating an “atlas” of the healthy and diseased colon and providing a high-resolution map of this complex disease.

By studying 366,650 individual cells from a cohort of 30 patients and healthy individuals, the scientists identified changes in the composition of the tissue, inferred how the interactions between different cell types change during disease, and determined in which cells and pathways disease-associated genes are acting. The data also suggest new cell subsets that might be involved in drug resistance, which affects about a third of patients, and homed in on additional genes that could increase the risk of ulcerative colitis. The work appears in Cell.

“Having a map of the common molecular activity, and examining the cell-specific biology that is altered in disease, opens doors to new diagnostic and therapeutic hypotheses that we can now explore to ultimately improve patient health,” said co-senior author Ramnik Xavier, a core institute member and co-director of the Infectious Disease and Microbiome Program at Broad and director of the Center for Computational and Integrative Biology at MGH.

The study’s co-first authors are Christopher Smillie, Moshe Biton, and José Ordovas-Montañes. Other co-senior authors include Ashwin Ananthakrishnan, director of the Crohn’s and Colitis Center at MGH; Alex Shalek, institute member at Broad, Pfizer-Laubach career development associate professor in IMES, Chemistry, and the Koch Institute at MIT, and associate member at the Ragon Institute; and Aviv Regev, core institute member and director of the Klarman Cell Observatory at Broad, professor of biology at MIT, and Howard Hughes Medical Institute Investigator.

This study is part of the international Human Cell Atlas project, of which Regev is also the founding co-chair. Data from the study are available through the Single Cell Portal and DUOS.

To generate the cellular atlas, the team collected 68 small biopsies from the colons of 18 ulcerative colitis patients and 12 healthy individuals, one of the largest cohorts for this type of study. Single-cell analysis revealed 51 subsets of immune, epithelial, and other cell types in the tissue. 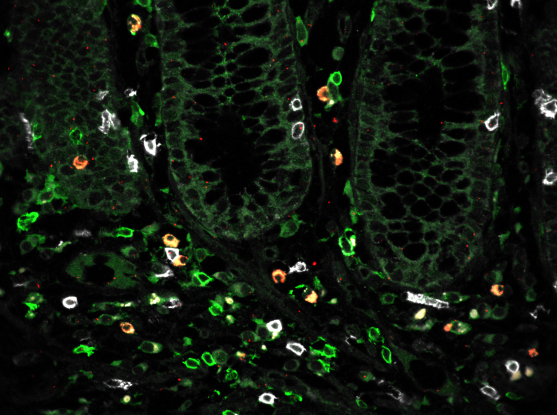 Tissue samples from patients and healthy individuals showed critical differences in both the proportions of certain cells and their likely interactions with each other. For example, patient samples had higher proportions of a special type of fibroblast associated with inflammation and of T cells that co-express CD8 and IL-17. The team also detected a rare subset of epithelial cells called microfold-like cells, which are typically only seen in the small intestine but appeared in the colon of ulcerative colitis patients.

Computational data indicated that these cell populations signal to each other and control other interactions between diverse cell subsets, suggesting a substantial rewiring of the cellular network in diseased colons.

The team also gained further insight into a possible mechanism of drug resistance in ulcerative colitis patients. A protein known as tumor necrosis factor (TNF) is often found at higher levels in patients with inflammatory bowel diseases, and anti-TNF drugs reduce inflammation and heal the tissue in many patients. However, approximately 30 percent of patients do not respond to the treatment, and of those who do, many acquire resistance over time.

Investigators have previously identified genes whose expression was associated with treatment resistance, but it was unclear which particular cell types in the colon were expressing these genes. Using their single cell data, the team discovered that one of the main culprits involved in drug resistance appeared to be the inflammation-associated fibroblasts. The study pinpointed other cells the fibroblasts may interact with to promote drug resistance, and suggested that the fibroblasts may respond to a signaling molecule called OSM to bypass TNF pathways and evade the drugs.

This finding could one day be used to help identify patients who are likely to develop drug resistance, Smillie said: “Patients with these resistance markers could be identified in advance and perhaps given another drug in conjunction with anti-TNF therapy to treat their disease, targeting these specific cells.”

Previous genetic studies of patients with ulcerative colitis have uncovered many disease-linked regions of the genome, but researchers often do not know in which cells and pathways these genes act, hampering the ability to study them further. Using the new cell atlas, the research team determined both the cell types that express these genes and their possible functions. For example, the microfold-like cells expressed many disease-associated genes at high levels, suggesting an important role for these cells in ulcerative colitis.

This work also provides a general guide for determining which cell subsets express relevant genetic variants in other diseases, the authors said.

“Our analysis provides a framework for using single-cell analysis as a roadmap to new insights into human health, taking a plethora of individual genes and cells in a complex tissue and distilling the key genes, pathways, cells, and interactions that underlie disease,” says Regev. “This was a major collaborative effort, from the clinical to the experimental and computational team members, and we hope that the analyses will pave the road to combining genetics and single-cell genomics to better understand complex diseases.” 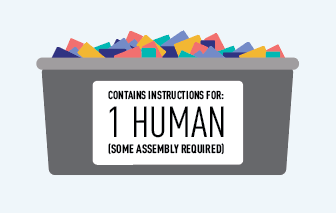 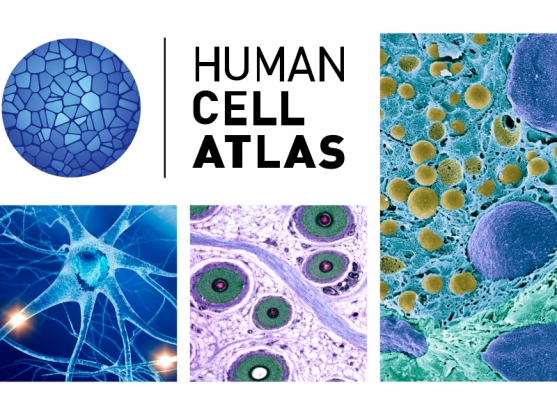