Shaping the tree of DNA’s regulators 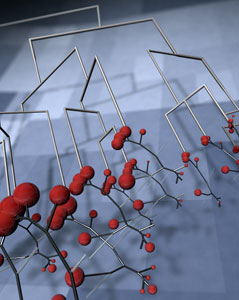 In each cell of the human body, more than six feet of DNA are carefully tucked into the tiny nucleus by wrapping around proteins called histones, resembling beads on a string. But histones are more than spools around which the DNA thread winds. Through chemical tags on their surface, histones can regulate activity of the genome, turning genes on or off by regulating how tightly DNA is compacted.

Scientists now recognize the growing importance of one family of enzymes with a role in this cellular dance. Histone deacetylases (HDACs) are enzymes that were originally discovered because of their roles in “epigenetic” modulation of genetic material — removing small chemical tags from histone proteins and thereby regulating the activity of certain genes. Today, scientists know that HDACs directly modify a large number of other proteins, suggesting they could play an even larger role in the cell.

There are 11 HDACs in humans, many originally characterized by Stuart Schreiber, director of the Chemical Biology Program at the Broad Institute of MIT and Harvard. These enzymes play central roles in development, physiology, and diseases like cancer, metabolic disease, and neurodegenerative disorders. Two drugs that target HDACs, known as HDAC inhibitors, have been approved for use in humans and more are in clinical testing.

Ideally, scientists would like to have compounds that target each of the HDACs individually, so that research or treatment for a particular HDAC-mediated disease could be tailored to a given set of enzymes by a mix-and-match approach. But in the hunt for HDAC inhibitors, laboratory tests haven’t been able to fully reveal which HDACs are inhibited by a given compound.

Now, a team at the Broad Institute led by affiliated researchers Ralph Mazitschek and Jay Bradner has developed a new assay for one class of HDACs previously hidden from lab tests. Appearing in the February 7 advance online edition of Nature Chemical Biology, the work also reveals surprises about existing inhibitors and, with a new broadly acting inhibitor the team developed, opens the doors to developing more targeted compounds with utility in research and clinical settings.

Based on their protein make-up, histones can be lumped into four classes. One of these, class IIa, is expressed differently in different cells in the body, so it holds potential as a target of drugs with minimal side effects. “Based on genetic studies, it becomes very clear that class IIa HDACs are really important enzymes,” said Mazitschek, also a researcher at the Massachusetts General Hospital Center for Systems Biology.

Despite the significance of class IIa HDACs, scientists lacked assays that could comprehensively interrogate this class. With insight from previous work on other HDACs, Mazitschek and his colleagues developed a new substrate that could reveal class IIa activity. “The substrate worked unbelievably, it was so active,” said Mazitschek. “We went from being able to thoroughly profile four enzymes to profiling nine. That certainly gives us a much more complete view of things.”

The team next wondered if they could reveal new details about how existing HDAC inhibitors work. Some compounds were thought to be pan-HDAC inhibitors, but previously no test could comprehensively profile the activity of an inhibitor against all classes of HDACs. With the new test in hand, the team profiled the potency of 16 widely used HDAC inhibitors, including many clinical candidates and two FDA-approved drugs, SAHA and romidepsin, against nine HDACs.

The work revealed that none of the so-called pan-HDAC inhibitors blocked class IIa HDACs to any significant degree. Mazitschek explained that molecules like SAHA, a prototypical HDAC inhibitor, were believed to target all HDACs to the same extent. But the new work disputes that. “We couldn’t believe what we saw,” he said. “It was like a paradigm-shift.” These inhibitors have been used in many experiments under the impression that they preferred no class to another. The new results will change how scientists use the compounds in research, depending on which HDACs they want to target, and some researchers may need to reevaluate previous findings in light of the new work.

Based on the patterns of how the 16 compounds inhibited various HDACs, the Broad team assembled a sort of family tree of HDACs, known as a phylogeny. In this tree, the trunk and branches represent the relatedness of HDACs based on how well they are blocked by the tested compounds, with cherries placed on the branches representing the inhibitors’ potency. Surprisingly, the phylogeny generated by this chemical genetics approach closely matched the biological phylogeny, a family tree of HDACs based on protein sequence that was used to distinguish members of the HDAC classes. “We came in with small molecules and could use those to generate an image of how the proteins relate to each other,” said Mazitschek. “It was almost a perfect match. That was really exciting.”

Although unlikely to be useful as a drug, a compound that inhibits all HDACs would be valuable as a research tool. With compounds like SAHA now revealed to be selective inhibitors, the team wanted to search for a truly non-selective inhibitor that targeted all HDACs. They synthesized a library of 320 compounds that showed promise of inhibiting all classes of HDACs and found success in one of these compounds, named pandacostat. The compound can be used by scientists looking to inhibit all HDACs including class IIa HDACs, a feat previously unachievable.

Beyond that, the successful development of the first pan-HDAC inhibitor provides clues about how to make compounds that are selective for class IIa HDACs without blocking the others, something that doesn’t exist today. “We think we understand what needs to be changed to make the next generation of compounds more selective.”

Scientists were initially interested in HDACs because of their effects on cancer cells, but biology has progressed and other diseases are implicated, making them more attractive targets. “Now you can link these enzymes to many different areas of biology,” said Mazitschek. “That’s fascinating.”

With the new assay and chemical phylogeny in hand, the team has a powerful tool for studying these important biochemical players. “It’s like having invented a microscope that allows us to look at details with a resolution that didn’t exist before,” said Mazitschek. “So far, everything has been in the dark and now we can switch on the light."

The team’s next goal is to use the new assay to develop class IIa inhibitors, but they also will work to provide the compounds to the greater scientific community. “It’s one of the Broad’s missions to not only enable our own research, but enable others when possible,” said Mazitschek. “We’ve opened the door by providing a new research tool. Now it’s up to the community to pick it up.”