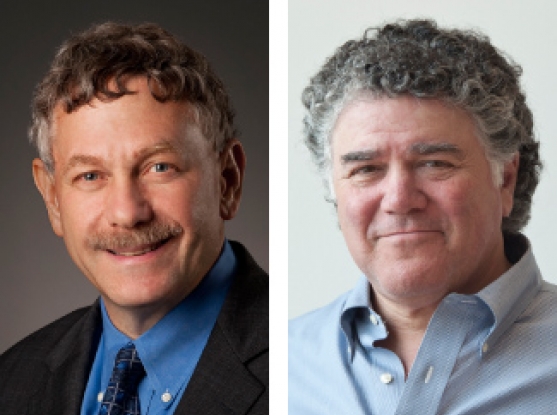 Two of the Broad Institute’s senior leaders addressed the Kendall Square Association (KSA) at its sixth annual meeting, held at the Boston Marriott Cambridge on Wednesday, March 26. Eric Lander, the institute’s Director, delivered an inspiring keynote address, emphasizing the importance of tending both Kendall Square’s buildings and the spaces between them—a “commons” where ideas are exchanged, new collaborations form, and innovations incubate. Another highlight of the meeting was the election of Alan Fein, Executive Vice President of the Broad Institute, to President of the KSA.

In his keynote address, Lander emphasized that many of the previous decade’s remarkable developments in bioscience were made possible by the very existence of Kendall Square, where a unique confluence of top universities, cutting-edge research institutes, and leading technology companies creates an ecosystem where innovation can thrive.

“You can’t really separate the science from the place,” Lander said. Although the world thinks of the Greater Boston and Cambridge area as the center of the biotech world, “those of us who live and work here,” he said, “know that the center of that center is a small radius around Kendall Square.”

Lander went on to explain that Kendall Square had played an essential role in the Broad’s origin. Much of the sequencing work for the entire Human Genome Project took place at a warehouse at 320 Charles Street, which had once stored the beer and popcorn sold at Fenway Park (and which is now the home of the Broad Institute’s Genomics Platform). That repurposed warehouse was the site of game-changing scientific work, but it also served as the incubator for an international scientific phenomenon.

“Young scientists from around the Boston and Cambridge area—people at Dana-Farber Cancer Institute, Massachusetts General Hospital, Brigham and Women's Hospital, Beth Israel Deaconess Medical Center, and Boston Children's Hospital—were beginning to come hang out in Kendall Square, in that beer and popcorn warehouse, and collaborate with each other,” Lander said. “Nobody got permission to do this. There were no official institutional agreements; nobody agreed who was responsible for this or that. They started this network of people who saw what the Human Genome Project would mean for medicine.”

Out of this unofficial network of scientists, brought together only by their shared interest in genomics and their proximity to Kendall Square, grew the Broad Institute. The formation of the Broad was inevitable because, in essence, it had already happened: the institute was built around from these existing networks.

Fein, one of the institute’s founders, was elected President of the KSA. (He will remain in his role at the Broad during his term.) In his remarks, he described his ideal of a healthy Kendall Square “ecosystem”: a place where organizations at every stage of the commercial life cycle can thrive. Kendall Square has attracted a number of large information technology and pharmaceutical companies, and it has retained many mid-sized biotech companies, Fein said. But making Kendall Square a hospitable place for start-ups, and for organizations just beyond the start-up stage, is of equal importance.

“If you start a company in Kendall Square and eventually have to move it because you can’t afford the rent, other entrepreneurs may see this and decide to start their companies somewhere else,” Fein said. “None of us wants Kendall Square to turn into a suburban office park.”

Continuing to “lubricate collaboration and innovation” and “create opportunities for people to learn about each other’s work” will be an important priority for the KSA, Fein said. These things alone, however, won’t be enough to ensure a robust future for Kendall Square.

“Innovation hubs, to sustain themselves, must have places where people who work there can live at affordable prices, and they have to have excellent transportation systems. We have neither,” Fein said. Ideas to develop new housing and improve the transit system are on the table right now, he said, thanks in part to the efforts of the KSA. But realizing these goals will require people who live, work, and play in Kendall Square to galvanize others in metro Boston who stand to benefit from such change.

“We need to find common cause with the other innovation hubs,” he said. “It’s time to reach out beyond the boundaries of Kendall Square.”