Searching for the “signature” causes of BRCAness in breast cancer 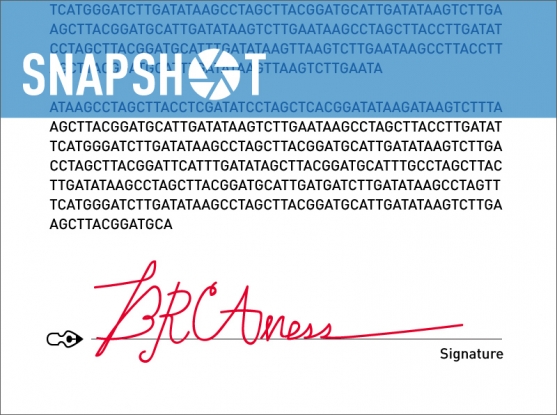 A mutation pattern or “signature” linked to defects in two genes points to other ways an important DNA repair mechanism can be shut off in breast cancer.

Breast cancer cells with defects in the DNA damage repair–genes BRCA1 and BRCA2 have a mutational signature (a pattern of base swaps — e.g., Ts for Gs, Cs for As — throughout a genome) known in cancer genomics as “Signature 3.” But not all breast tumor cells exhibiting Signature 3 have BRCA1 or BRCA2 mutations. Therefore, some consider Signature 3 a biomarker for “BRCAness,” a sign of a breakdown in BRCA-related DNA repair (a process called homologous recombination, or HR) in general and not BRCA damage in particular.

The question is, what else might deactivate HR and give rise to Signature 3? And beyond that, might Signature 3 have a role in the clinic?

To find out, an international team led by Paz Polak, Jaegil Kim, Lior Braunstein, and Gad Getz of the Broad Institute’s Cancer Program and Massachusetts General Hospital's Center for Cancer Research; and William Foulkes of McGill University reanalyzed data from nearly 1,000 breast cancer tumors collected by The Cancer Genome Atlas (TCGA). Their findings, reported in Nature Genetics, hint that mutational signatures like Signature 3 might fuel a precision medicine approach that uses a tumor’s full scope of mutations to guide risk and treatment decisions, instead of focusing on individual genes.

Among the breast tumors exhibiting Signature 3, the researchers found that:

And what of Signature 3’s clinical utility? The team found that they could combine the signature’s presence or absence in breast cancer cells with other data to classify rare BRCA1 and BRCA2 mutations as harmful or not, a finding they noted needs to be investigated further. The researchers also suggested that Signature 3 might one day factor into treatment decisions for women with breast cancer, or help guide development of future “BRCAness”-targeting therapies.

After a decade of genome-wide association studies, a new phase of discovery pushes on
Single-nucleus RNA sequencing, droplet by droplet