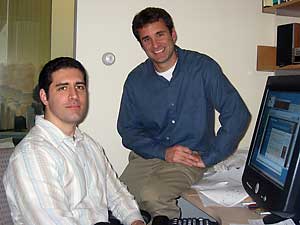 The first high-resolution analysis of the key feature that controls the activation of genes on human chromosomes was reported today in the journal Cell, by researchers from the Broad Institute of MIT and Harvard and Affymetrix, Inc. The study is pioneering in its large scale and surprising in its results. It reveals previously unknown domains of gene regulation in human chromosomes and also suggests the existence of many novel functional elements in the human genome.

The research team used high-density microarrays containing millions of distinct DNA fragments to examine "chromatin," the intricate structure that packages the genome and makes certain genes accessible and others inaccessible to the cell. Using these microarrays, the researchers surveyed two entire human chromosomes (chromosomes 21 and 22) as well as additional regions in both the human and mouse genomes.

Despite rapid progress in identifying human genes based on the completed sequence of the human genome, the genome's complex regulatory network — the mechanisms that turn genes on and off — still remains poorly understood. "Chromatin is a key part of the regulatory network that controls how genetic information is translated into a cell or an organism. Understanding chromatin is important because many of its components are implicated in cancer and other diseases," said Dr. Brad Bernstein, a research associate at the Broad Institute and instructor of pathology at Harvard Medical School, who co-led the study.

With the ability to perform genome-wide analysis, it should now become possible to gain very general insight into the structure and function of chromatin, said the researchers. In particular, such studies may be useful for understanding how gene regulation becomes defective in certain diseased tissues and cells, they said.

In the January 28 issue of Cell, the researchers report several findings:

The chromatin data "will be an invaluable resource in our effort to define the regulatory network of the genome," said Michael Kamal, co-lead author on the study and a computational biologist at the Broad.

"This project illustrates the power of high-throughput technologies on our understanding of biology," said Stuart Schreiber, who is a member of the Broad Institute, a professor at Harvard University, and an expert on chromatin research.

"High-density microarrays allow us to interrogate the genome without making any assumptions of what parts are important and what parts aren't. Using this unbiased investigational approach, we're finding that there may be much less unimportant DNA in the genome than we thought," said Thomas Gingeras, vice president of biological sciences, Affymetrix laboratories.

"The human genome still has many surprises lurking within it," said Eric S. Lander, director of the Broad Institute and senior author on the study. "One of the most important is the mystery of how genes are turned on. The ability to take global views of chromatin in human cells holds tremendous promise for unraveling this mystery."

Dr. Bernstein is also affiliated with the Brigham and Women's Hospital and is a postdoctoral researcher in the Howard Hughes Medical Institute lab of Stuart L. Schreiber at the Department of Chemistry and Chemical Biology at Harvard University.

The authors also include:

The research was supported by funds from the National Institutes of Health, the Howard Hughes Medical Institute and Affymetrix, Inc.

The mission of the Broad Institute is to create tools for genomic medicine and make them freely available to the scientific community, and to apply these tools to propel the understanding and treatment of disease.