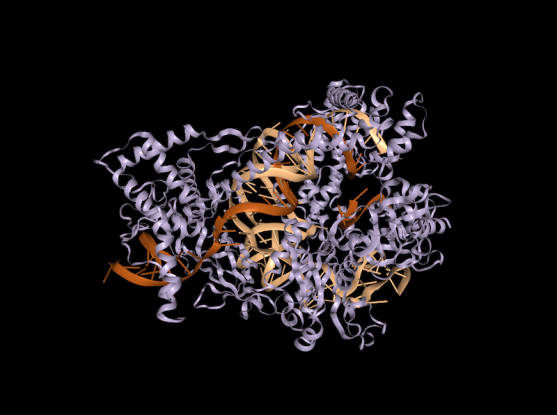 CRISPR team harnesses new Cas12b enzyme for use in eukaryotic cells, adding to the CRISPR toolbox.

A team that includes the scientist who first harnessed the revolutionary CRISPR-Cas9 and other systems for genome editing of eukaryotic organisms, including animals and plants, has engineered another CRISPR system, called Cas12b. The new system offers improved capabilities and options when compared to CRISPR-Cas9 systems.

In a study published today in Nature Communications, core institute member Feng Zhang and colleagues at the Broad Institute of MIT and Harvard and the McGovern Institute for Brain Research at MIT, with co-author Eugene Koonin at the National Institutes of Health, demonstrate that the new enzyme can be engineered to target and precisely nick or edit the genomes of human cells. The high target specificity and small size of Cas12b from Bacillus hisashii (BhCas12b) as compared to Cas9 (SpCas9), makes this new system suitable for in vivo applications. The team is now making CRISPR-Cas12b widely available for research.

The team previously identified Cas12b (then known as C2c1) as one of three promising new CRISPR enzymes in 2015, but faced a hurdle: Because Cas12b comes from thermophilic bacteria — which live in hot environments such as geysers, hot springs, volcanoes, and deep sea hydrothermal vents — the enzyme naturally only works at temperatures higher than human body temperature.

“We searched for inspirations from nature,” Zhang said. “We wanted to create a version of Cas12b that could operate at lower temperatures, so we scanned thousands of bacterial genetic sequences, looking in bacteria that could thrive in the lower temperatures of mammalian environments.”

Through a combination of exploration of natural diversity and rational engineering of promising candidate enzymes, they generated a version of Cas12b capable of efficiently editing genomes in primary human T cells, an important initial step for therapeutics that target or leverage the immune system.

“This is further evidence that there are many useful CRISPR systems waiting to be discovered,” said Jonathan Strecker, a postdoctoral fellow in the Zhang Lab, a Human Frontiers Science program fellow, and the study’s first author.

The field is moving quickly: Since the Cas12b family of enzymes was first described in 2015 and demonstrated to be RNA-guided DNA endonucleases, several groups have have been exploring this family of enzymes. In 2017 a team from Jennifer Doudna’s lab at UC Berkeley reported that Cas12b from Alicyclobacillus acidoterrestris can mediate non-specific collateral cleavage of DNA in vitro. More recently, a team from the Chinese Academy of Sciences in Beijing reported that another Cas12b, from Alicyclobacillus acidiphilus, was used to edit mammalian cells.

The Broad Institute and MIT are sharing the Cas12b system widely. As with earlier genome editing tools, these groups will make the technology freely available for academic research via the Zhang lab’s page on the plasmid-sharing website Addgene, through which the Zhang lab has already shared reagents more than 52,000 times with researchers at nearly 2,400 labs in 62 countries to accelerate research.

Zhang is a core institute member of the Broad Institute of MIT and Harvard, as well as an investigator at the McGovern Institute for Brain Research at MIT, the James and Patricia Poitras Professor of Neuroscience at MIT, and an associate professor at MIT, with joint appointments in the departments of Brain and Cognitive Sciences and Biological Engineering.