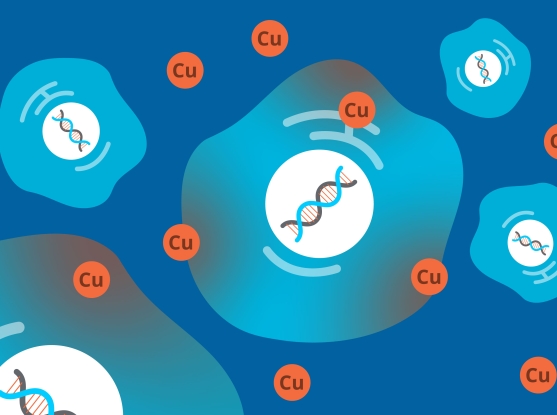 The unique mechanism explains how copper kills cells and could be exploited to treat certain cancers.

Copper is an essential element of life from bacteria and fungi to plants and animals. In humans, it binds to enzymes to help blood clot, hormones mature, and cells process energy. But too much copper kills cells — and now scientists have figured out how.

Researchers at the Broad Institute of MIT and Harvard have uncovered a new form of cell death that is induced by copper. Led by research scientist Peter Tsvetkov and institute director Todd Golub, the team found that copper binds to specialized proteins, causing them to form harmful clumps, and also interferes with the function of other essential proteins. Cells go into a state of toxic stress and ultimately die.

By shedding light on key components of this process, the research also identified which cells are particularly vulnerable to copper-induced death. The findings could help researchers better understand diseases in which copper is dysregulated, and could even inform the development of new cancer treatments. The research is published in Science.

“Copper is a double-edged sword: too little and cells can’t survive. But too much, and cells die. It’s been a mystery how excess copper is harmful, but we’ve finally figured it out,” said Golub, who is also a member of the faculty of the Dana-Farber Cancer Institute and Harvard Medical School.

Tsvetkov and Golub’s quest to understand copper-based toxicity began in 2019 when they stumbled upon two small molecules that shuttle copper across cell membranes. They found that the copper carriers killed specific drug-resistant cancer cells. One of the molecules, elesclomol, had even reached clinical trials as a potential cancer drug, but it failed to show efficacy in patients, as it was not known at the time how this molecule works. However, the researchers knew from their experiments that the copper-bound molecules kill cells — and that this kind of cell death is different from other known forms of cell death pathways. Tsvetkov wanted to dig deeper and learn exactly how copper kills cancer cells.

“Once I started going down that rabbit hole, it very quickly became a very basic cell biology question,” he said.

The researchers began systematically testing the hypothesis that the toxicity of the copper carriers stems from copper itself. They showed that many different copper-binding molecules, or ionophores, induced cell death in a similar way, and that this process completely depended on copper availability. Moreover, the researchers found that this form of cell death, which they call cuproptosis, is distinct from other well studied forms. When the researchers blocked known pathways of cell death such as apoptosis and ferroptosis, the cells treated with copper ionophores still died.

Next, the team homed in on how these copper carriers kill cells. They found that cells that relied on mitochondria to produce energy were nearly 1,000 times more sensitive to copper ionophores than cells that use glucose processing. Using multiple CRISPR knockout screens, the team identified key genes that facilitate copper-induced death.

These genes include FDX1, which encodes a protein targeted by elesclomol, as well as six genes involved in protein lipoylation — a chemical modification of a small number of proteins in the mitochondria that is essential for mitochondrial metabolism. The researchers found that copper delivered to the mitochondria by the ionophores binds directly to these lipoylated proteins, forcing them to form long chains and clumps that lead to cell death. They also discovered that copper interferes with iron-sulfur clusters, which are part of several key metabolic enzymes. This downregulated the enzymes, pushing cells into a toxic state of stress that ultimately killed them.

Part of this new cell death mechanism is known to occur in bacteria and yeast, so the scientists suggest that their study could shed light on a variety of biological processes, including those in microorganisms that produce copper ionophores with antimicrobial properties, and in people with genetic disorders involving copper dysregulation, such as Wilson’s disease.

Though one of the copper ionophores, elesclomol, failed its clinical trial as a cancer therapeutic, later analysis revealed that the molecule had helped patients whose tumors rely on mitochondria for energy production. Now that the team has found markers of copper-induced cell death, they suggest that elesclomol could potentially be used to treat a range of cancers that are particularly vulnerable to the process, such as those expressing FDX1.

Tsvetkov is excited by the breadth of these clues and is eager to learn about new organisms or diseases where copper-induced cell death might play a role. He hopes their findings will inspire new research trajectories in cell biology, cancer, and antibiotics.

“We’ve revealed a new mechanism and found some elements we think are essential for this process, but it opens up so many other important questions that I hope will be explored,” he said. “There’s a lot to do.”