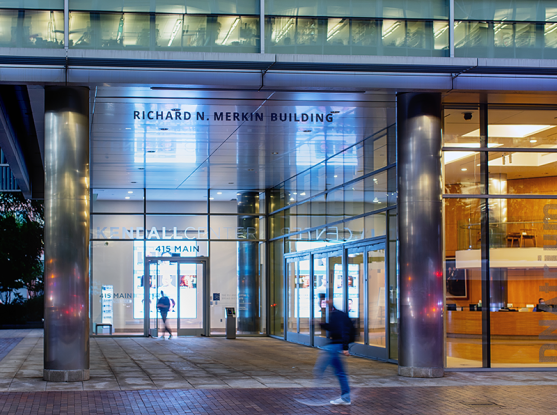 Support includes a gift to advance the Merkin Institute and the Merkin Fellows, inaugurating the Merkin Prize in Biomedical Technology, and establishing the Merkin Fund to support promising research in fundamental science.

Dr. Richard Merkin is renewing support for transformative research at the Broad Institute.

For more than a decade, Merkin has supported research at the Broad, enabling scientists to develop new genome-editing technologies, gain insight into how DNA is organized in cancer cells, and devise methods for discerning the function of genetic variants. Through the Merkin Institute Fellowship, he has helped nearly 20 promising early career scientists gain experience, drive impact, and launch innovative research. Most recently, he supported the founding of the Merkin Institute for Transformative Technologies in Healthcare at the Broad Institute, an initiative whose mission is to realize the potential for innovations in biomedicine - specifically, technologies meant to have a profound effect on therapeutics, diagnostics, and data. He also established the Richard Merkin Professorship, an endowed professorship currently held by Broad Institute Core Member David Liu.

Dr. Merkin is making a new transformative gift to the Broad Institute to further advance the Merkin Institute and the Merkin Fellows, as well as to inaugurate a new international prize: the Merkin Prize in Biomedical Technology. He is also establishing an endowment for the Merkin Fund, which will support the most creative and promising research directions in fundamental science.

In recognition of Dr. Merkin’s deep commitment to research and innovation at the Institute, the Broad Institute’s building at 415 Main Street in Cambridge, Massachusetts has been named the Richard N. Merkin Building. The seven-story, 234,000 square-foot building, which is located in the heart of Kendall Square, houses advanced research laboratories to allow scientists to investigate the fundamental biology of, as well as new therapeutic options for, diseases ranging from cancer and diabetes to rare genetic conditions. Researchers are also developing new tools and techniques—available to the global research community—aimed at helping science rapidly progress.

Broad Institute Director Todd Golub led the building’s dedication ceremony on October 6, 2021. “It is hard to put a value on Dr. Merkin’s support for science at the Broad,” Golub said. “Many research projects that he has supported, and continues to support, have been so transformative that year by year we see them continue to change the scientific landscape. I’m convinced that in the future we will look back in awe at how consequential his giving has been.”

“I can think of no better way to transform biomedicine, and ultimately improve the lives of patients, than to give full support to the most talented and ambitious scientists, those who aren’t afraid to tackle bold ideas and take risks,” said Dr. Merkin. “This is clearly the goal of the Broad, and that’s why I am so excited to partner with them in this mission.”

Dr. Merkin is a physician by training. In 1979, he founded the Heritage Provider Network (HPN), one of the country’s largest doctor-owned integrated health care systems. Since HPN’s inception, he has led the formation of dozens of independent practice association structures—all designed to make doctors’ offices more efficient for both doctors and patients. Through his experience with HPN, Dr. Merkin saw how bold and transformative ideas can lead to paradigm-shifting methods and technologies that can revolutionize healthcare.

Dr. Merkin is one of Broad’s early philanthropic partners dating back to his first gift in 2009 to fund a program for stem cell research that fueled a landmark study on long noncoding RNAs. At the time, these molecules were largely a mystery, but thanks to Dr. Merkin’s generosity, Broad scientists were able to develop a comprehensive toolbox of experimental methods and algorithms that enabled them to explore what happens in embryonic stem cells when more than 100 long noncoding RNAs are knocked out, one at a time. The team subsequently discovered that the RNAs play a central role in embryonic development, not just proteins as previously thought.

In 2012, Dr. Merkin created the Broad’s first endowed fellowship, the Merkin Institute Fellowship, which is designed to support promising scientists—especially those developing technologies that could dramatically accelerate progress for an entire field. This program has funded almost 20 Broad researchers, including Feng Zhang, core institute member and a pioneer in developing CRISPR; Beth Stevens, an institute member who has made seminal discoveries in the biology of schizophrenia; Martin Ayree, an institute member who has developed tools that generate high-resolution, 3-D models of DNA organization in tumor cells; and Fei Chen, core institute member and a pioneer of molecular and microscopy tools that illuminate biological pathways and functions.

“I am especially grateful to Dr. Merkin for his support, not only to myself and to my own work in neurobiology, but to all the other Merkin Fellows at the Broad who have dedicated their lives to transforming human health,” said Stevens. “This kind of generosity will undoubtedly help patients and change people’s lives. I’m convinced of that.”

These projects have included research into new classes of drugs for diabetes and several cancers, new approaches to drug development, and a scalable approach for identifying disease-causing mutations.

“Over the past four years the Merkin Institute for Transformative Technologies in Healthcare has supported innovative, early-stage research opportunities for improving how we detect and treat disease,” said Liu. “Dr. Merkin’s continued support to the Broad will be key to helping us turn these projects and future creative ideas into promising realities for patients and their families.”

All of these efforts and the new transformative gift epitomize Merkin’s two philanthropic passions: supporting promising researchers and driving discovery through the development of bold new technologies.