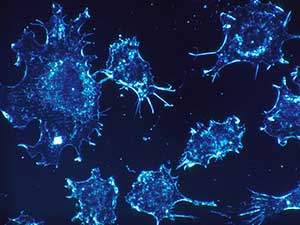 Cancer is a complex beast. Not one but many genes can conspire to fuel tumor growth. While there is a growing arsenal of tools to help scientists untangle this vast and intricate genetic web, the challenge lies in pinpointing not just the most influential players, but also the ones that are "druggable" - that is, able to be tamed with a drug.

KRAS exemplifies this challenge. Despite decades of work to develop drugs that neutralize this cancer-causing gene (also called an "oncogene"), none have proved effective. Meanwhile, current therapies are largely powerless against tumors with KRAS mutations, which comprise roughly one-third of all cancers, including a significant fraction of the most deadly forms - lung, colon and pancreatic cancers.

Now, a paper appearing in the October 21st advance online issue of the journal Nature shines new light on the KRAS conundrum. A research team led by scientists at the Dana-Farber Cancer Institute and the Broad Institute of Harvard and MIT has identified a key genetic weakness in cancer cells that carry KRAS mutations. This vulnerability, in the form of a gene called TBK1, gives scientists a deeper understanding of the inner workings of cancer cells. Importantly, it also suggests a new way of fighting KRAS mutant tumors, one that could someday lead to better cancer drugs.

"Our findings stem from a whole new way to identify novel cancer treatments," said senior author William Hahn, an associate professor at Dana-Farber Cancer Institute (DFCI) and Harvard Medical School, and a senior associate member of the Broad Institute. "The TBKI result shows us that systematic approaches really can be fruitful."

To uncover the weakness bestowed by TBK1, Hahn and his colleagues harnessed a technology known as RNA interference (RNAi), which can turn off, or at least tamp down, the activity of individual genes, much like a dimmer on a light switch. But instead of targeting just a few genes, the researchers targeted nearly 1,000 of them. This kind of genome-scale, high-throughput approach was made possible through a collaboration with scientists in the Broad's RNAi Platform, led by David Root.

The team analyzed the effects of disrupting gene activity in cancer cells carrying mutated versions of the KRAS oncogene. They focused on identifying genes that, when disrupted, cause KRAS mutant cells to die, but otherwise leave normal cells intact. "This kind of approach has the potential to uncover new ways of treating tumors that minimize the harm to other cells in the body," explained Hahn.

The basis for the researchers' work lies in a scientific concept known as "synthetic lethality," in which two genes, often mutated, work together to kill the cells that carry them. The study's first author, David Barbie, a medical oncologist and researcher at the Broad, DFCI and Massachusetts General Hospital explained it like this: "A tumor cell carrying an oncogene is like a car with a jammed accelerator - the car is speeding, but it's pretty unstable," he said. "With synthetic lethality, we can take aim at something that specifically allows it to stay on the road."

Both Hahn and Barbie emphasized the deeply collaborative nature of the research. The project drew on the scientific and computational expertise across the Broad Institute, DFCI and beyond. "We really put our resources together to drive progress in one of cancer biology's thorniest challenges," said Hahn.

The researchers' discovery is part of a larger effort at the Broad and elsewhere known as Project Achilles, which integrates various genome-scale methods to identify the weak spots - or "Achilles' heels" - across different cancer types. As the technologies that underpin these methods have recently grown, the project will soon embark on phase two, harnessing RNAi tools that survey the full suite of human genes and analyzing at least 300 cancer cell lines.

Although Hahn and his colleagues' findings signal a major scientific advance, the researchers caution that it is still too early to know if their work will bear fruit. "It's not yet clear that a drug designed to target TBK1 will work, but that is our hope," Barbie said.