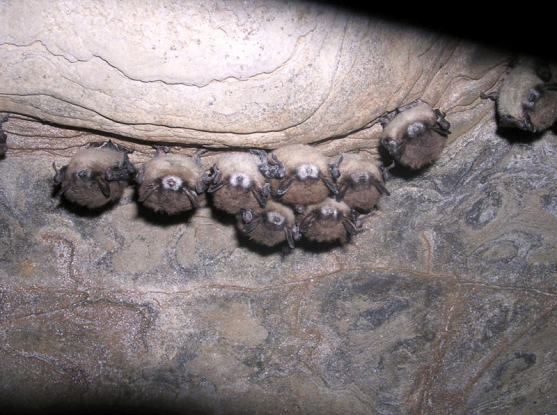 Broad researchers have sequenced and assembled the genome of Geomyces destructans, or white nose fungus, the pathogen involved in the death of over one million bats in the northeastern United States. They have made the genomic data public in an effort to aid those who hope to stop the spread of white nose syndrome, which threatens to destroy more bat populations.

“The genome should rapidly advance our understanding of this pathogen, but is only a first look,” said the Broad’s Fungal Genomics group leader Christina Cuomo. “The hope is that the genome will be a platform to jumpstart work on this problem, to help devise ways to track and combat this fungus. Treating an infectious outbreak in nature is complicated, as the players are not only the bats and the fungus but the rest of the ecosystem, which includes other fungi you would not want to wipe out.”

Broad researchers collaborated with the US Geological Survey National Wildlife Health Center on this project. USGS microbiologist David Blehert isolated the fungus from bats and shared genomic DNA with the Broad for sequencing. Blehert and his colleagues were among the first researchers to discover and describe the fungus. “The genome provides a framework for studying pathogenesis,” he said. “When you’re working with a relatively unknown organism, having a genetic roadmap is always a benefit.”

Bats play an important role in the ecosystem, consuming vast amounts of insects (up to half their bodyweight in one night). As bat populations wither, insects — and insect-borne diseases — could rise. Studying this fungus may also serve as a model for understanding a related fungus called Geomyces pannorum that can cause skin infections in people.

In 2007, researchers began documenting massive bat deaths in caves near Albany, NY. More than 80 percent of the little brown bats hibernating in these affected caves died and had a white coating over their noses, wings, and ears. The devastating disease, known as white nose syndrome (WNS), has spread each winter and now affects caves and mines from Ontario, Quebec, and New Hampshire in the north, southward to Tennessee.

Recent studies have also indicated that the white nose fungus is present in Europe, and that it may have been there for several decades. However, it doesn’t seem to cause harm to European bats. This could be because of environmental differences, an evolved resistance among European bats, or differences in the fungus itself. “Now that we have the genome, we can start to look in more detail at the similarities and potential differences between North American and European isolates of G. destructans,” said Blehert. Researchers at other institutions also plan to sequence fungus samples from across the United States and compare them to the strain of the fungus from New York sequenced by the Broad Institute.

The Broad’s Fungal Genome Initiative focuses on sequencing pathogens of medical, ecological, or agricultural importance as well as some model systems, which are used to investigate biological questions. Over 130 fungal genomes have been completely sequenced at the Broad and elsewhere, but the fungus that plagues bats is in a remote area of the fungal tree of life – the closest fungal species that has been sequenced is a plant pathogen.

It is not yet known whether bats can carry the white nose fungus throughout the warm seasons, but it is during their hibernation cycle that the fungus becomes a menace. The fungus, unable to grow at warm temperatures, colonizes and invades the skin of hibernating bats in a manner that is much more aggressive than observed for other fungal skin pathogens of mammals. Research into the mechanism by which WNS kills bats is ongoing.

These are some of the questions that Cuomo hopes her research will allow ecologists to pursue. “We need to move quickly, as WNS appears to still be spreading. Hopefully, the genome will enable rapid investigations into this fungus,” she said.

Learn more about WNS on the USGS web site