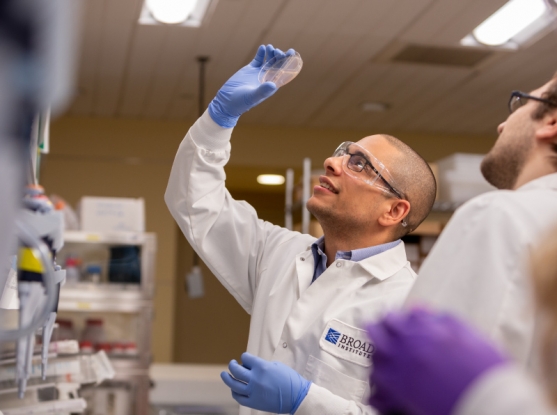 Ribosomes are complex molecular machines in the cell that catalyze the production of proteins. Ahmed Badran, a Broad Fellow at the Broad Institute of MIT and Harvard, and his lab aim to engineer new kinds of ribosomes that generate proteins with novel properties.

Now the team has taken an important step in that direction. They have come up with a high-throughput method for building ribosomes that uses parts from different microbes, and measures and optimizes the ribosomes’ ability to catalyze protein production. The study, published in Nature Communications, details the successful insertion of more than 30 different ribosomes into an E. coli cell.

Because antibiotics typically target ribosomes in various bacteria, the new method could be a way to rapidly test new antibiotics that target only ribosomes of specific human pathogens.

“As the field moves towards targeted antibiotics with the goal of limiting broad resistance acquisition, we now have the ability to screen new drugs and potentially discover molecules that inhibit ribosomes from human pathogens, but not commensal bacteria,” said Badran, senior author on the paper.

The work also gives researchers new tools for synthetic biology. “Previously, E. coli ribosomes represented the bulk of the toolkit available to synthetic biologists,” said first author Natalie Kolber, who was a research associate at Broad at the time of the research and is now a graduate student at Stanford University. “We were interested in expanding that toolkit to ribosomes from other species and using them for new applications.”

Synthetic biology researchers typically use parts from the E. coli ribosome when engineering new macromolecules, but this has limited researchers’ ability to create a greater variety of molecules.

Ahmed’s team first wanted to understand why it is so tricky to get a ribosome from a different species to work in an E. coli cell. To do this, Kolber, Badran and colleagues used orthogonal translation, a technique that forces the ribosome to exclusively generate a specific protein — in this case, green fluorescent protein (GFP). If the ribosome worked in its new environment, the researchers could immediately see that the cell made GFP and fluoresced green.

Using this technique, the scientists determined that ribosomes from bacteria closely related to E. coli could easily translate GFP. The more genetically divergent the bacteria, the harder it became for their ribosomes to work in E. coli.

But the team was able to improve the function of ribosomes from distantly related bacteria by introducing key RNA and proteins associated with ribosomes from the original cell, to make the ribosome feel more at home and coax it to work in E. coli. The researchers then developed universal engineering rules for orthogonal translation that could be extended to any reporter protein, and confirmed the validity of these rules in a test on other fluorescent proteins.

“Using this method, we can now pick microbes that sit somewhere on a phylogenetic tree, and based on where they sit with respect to E. coli, we can predict ways to get their ribosomes to function with high efficiency,” said Badran.

Badran and his team now plan to develop their approach into a platform to screen antibiotics for ribosome-specific inhibition, and to investigate the biotechnological applications of engineered ribosomes.

"There’s no reason to only use E. coli ribosomes for synthetic biology,” said Kolber. “This really enables you to take advantage of all the capabilities that Darwinian evolution has generated across different species.”

Support for this research was provided in part by a National Institutes of Health Director's Early Independence Award, the NASA Exobiology Program, and the Broad Institute of MIT and Harvard.