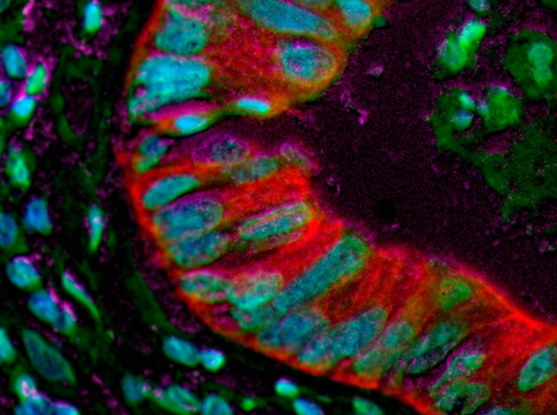 In explaining why mutations in the gene TP53 tend to cluster in “hot spots,” a new study lays the groundwork for ability to identify the function of any mutation in any cancer gene.

The most commonly mutated gene in cancer has tantalized scientists for decades about the message of its mutations. Although mutations can occur at more than 1,100 sites within the TP53 gene, they arise with greatest frequency at a handful of points dubbed “hot spots.” Does this imbalance suggest that hotspot mutations are especially conducive to cancer or that they’re particularly disabling to TP53? What does the plethora of mutations at hot spots tell scientists about the role of TP53 within cells and about the ability of certain mutations to disrupt that role?

A study published today in Nature Genetics by researchers at Dana-Farber Cancer Institute, the Broad Institute of MIT and Harvard, and other institutions reveals that hotspot mutations aren’t so special, after all — that they are no more cancer-promoting than many other mutations are, and are simply artifacts of the processes by which cells acquire mutations. The discovery, which involved making every possible mutation in TP53 and testing all of them in cells, led to the creation of an online tool that physicians and researchers can use to learn the effect of any TP53 mutation they encounter.

“As tumors are increasingly sequenced to identify mutations vulnerable to targeted therapies, it’s important that we be able to know the function of those mutations and how they affect tumor cells,” says William Hahn, senior author of the study, deputy chief scientific officer at Dana-Farber, an institute member in the Broad's Cancer Program, and a faculty member at Brigham and Women’s Hospital. “Our work in TP53 suggests that this information can be compiled for virtually any gene.”

TP53 is a tumor-suppressor gene that works by placing a damper on cell division and prevents cells from growing and multiplying out of control. When mutated — when the DNA code within the gene is misspelled — the gene may lose its normal function, allowing cell growth to run rampant. Mutations in TP53 are found in virtually every type of cancer, at rates of up to 50 percent in ovarian, esophageal, colorectal, head and neck, laryngeal, and lung cancers. People born with mutated forms of the gene are at exceptionally high risk of developing an array of different cancers.

While mutations can theoretically arise anywhere along the chain of DNA that comprises TP53 — and while hundreds of such mutations have been found in tumor samples — mutations are more likely to occur in five or six hot spots than anywhere else. Researchers have speculated that cancer cells may favor hot spot mutations because such mutations are particularly disabling to TP53, weakening its grip on cell growth more than other mutations do. Some have theorized that because the hot spot mutations are of a type normally found in oncogenes — which spur cancer growth — TP53 may have a hitherto-undetected oncogenic role.

To resolve these questions, Hahn and his colleagues used technology unavailable only a few years ago to create a library of 8,258 variants of TP53, representing all the mutations that could arise in the gene. The variants were then placed in cells to see what effect they would have on cell growth.

“We found that hotspot mutations were no more oncogenic — no more likely to promote cancer — than many other mutations,” Hahn remarks. “The tendency of mutations to arise in the hot spots is, rather, tied to processes by which mutations occur.

“A variety of factors can cause mutations — ultraviolet light, DNA-damaging chemicals, etc.,” Hahn explains. “Certain carcinogens [cancer-causing substances] tend to target certain DNA sequences — specifically, those sequences that are more easily mutated. The array of mutations that we see in TP53 reflects the nature of the carcinogens to which cells are exposed.”

Different tissues in the body tend to be exposed to different carcinogens — lung cells to carcinogens in tobacco smoke, for example, or colon cells to carcinogens in food. Researchers used the data they’d collected to predict how frequently TP53 mutations would arise in different varieties of cancer. When they matched their predictions against online data about the prevalence of TP53 mutations in various cancer types, their predictions were borne out.

“This indicates we’re correct that mutations in TP53 are focused on certain hot spots because those spots are targeted by the specific carcinogens to which cells are exposed,” Hahn says. “Understanding the role played by specific mutations within cancer-related genes will become increasingly important as gene sequencing takes on a larger role in cancer treatment. Our work is a significant step toward that goal.”

This story was adapted from a press release issued by Dana-Farber Cancer Institute.