By Haley Bridger and Nicole Davis 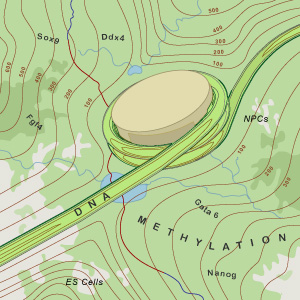 Researchers have used the latest genomic tools to map out the epigenetic landscape, which is shaped by DNA methylation and modifications to histone proteins. They have also examined the role that these marks may play in cellular reprogramming.
Image by Bang Wong, Broad Communications

Much of the field of stem cell biology and development remains uncharted territory. Just as famous explorers and astronomers mapped out landmasses and constellations, researchers are working fervently to chart the molecular landscapes within stem cells — especially embryonic stem cells. A clearer understanding of the cells' unique properties, particularly their ability to give rise to nearly any type of cell, could unlock fundamental questions about biology and may even spur novel ways to treat disease.

A team of researchers at the Broad Institute has helped break new ground in stem cell research through work described in two recent Nature papers. The most recently published study, appearing in the July 6 advance online issue, involves an effort to map regions of cells' genomes marked by DNA methylation — one of several so-called "epigenetic" modifications. If DNA is the blueprint of a living organism, epigenetic marks, often in the form of chemical tags called methyl groups, are the gatekeepers to that blueprint. When affixed to DNA or to its protein scaffold (called "chromatin"), methyl groups can enable genes to be switched on or off, orchestrating signals that allow cells in the body, which share the same DNA, to assume different forms and functions.

In work published last year, Broad Institute researchers applied genomic tools to map the methylation of chromatin proteins called histones across the genomes of several types of cells, including embryonic stem cells. To complete that "epigenomic" picture, they decided to expand their work to include DNA methylation. "We used some of the latest genomic technologies," said co-first author Alex Meissner, "to address a question many have wondered about: what's the role of DNA methylation in cell development and differentiation?"

Researchers from the Whitehead Institute, Harvard University and Harvard Medical School came together at the Broad Institute to analyze DNA methylation throughout the genomes of embryonic stem cells, as well as more developmentally mature cells.

Meissner, formerly a postdoctoral fellow in the Jaenisch laboratory at the Whitehead Institute and now a Harvard University assistant professor and Broad associate member, said the new DNA methylation maps are the result of a long-term effort to address fundamental questions about how epigenetic factors influence cell development.

Researchers are able to create these maps using a technique known as bisulphite DNA sequencing. Although epigenetic information generally cannot be read from the As, Gs, Cs, and Ts that make up the DNA code, it turns out that a special chemical, sodium bisulphite, actually makes it possible to detect epigenetic modifications. Just as fine powders help detectives identify otherwise invisible fingerprints, sodium bisulphite helps scientists visualize the spots in a cell's genome that harbor methyl groups and the spots that do not. The technique offers detailed views of DNA methylation and can now be implemented on a large-scale due to advances in high-throughput sequencing technologies.

With these advanced technologies, the scientists created DNA methylation maps of embryonic stem cells, as well as cell types derived from them, signifying the first such maps of mammalian cells. Several findings stood out from careful analyses of the maps, the most notable of which was the correlation between DNA methylation and histone methylation. Just as a topographic map of steep terrain and a political map of countries and borders may show similar patterns, chromatin and methylation maps can be used individually, or, more effectively, together to see a clearer picture of the molecular landscape. "In the past, these two types of epigenetic marks were rarely studied together," said Tarjei Mikkelsen, a graduate student at the Broad Institute and co-first author of the July 6 Nature paper. "By examining them as a whole, we now have one of the first integrated pictures of epigenetic changes during cellular development."

By perusing the maps, the researchers, led by Broad director Eric Lander, were also able to pick out specific sites within the genome where methylation fluctuates as cells develop, such as when embryonic stem cells mature into neural cells. Peering more closely at these dynamic changes, they identified certain sites associated with developmental genes that become overly methylated.

"Hypermethylation can be a sign that nearby genes are inaccessible, permanently shut off. And it is something that's commonly observed in the genomes of tumor cells," said Meissner. "These maps as well as the approaches used to create them may help shed light on the role of DNA methylation in human cancers."

Increasing the efficiency of reprogramming

DNA methylation was also at the core of the scientists' earlier paper, published in July 3 print issue of Nature. That paper described several molecular hurdles that impede a powerful technique in stem cell research — a recently described laboratory procedure that can nudge adult cells into a more primitive, stem-cell like state. This cellular "reprogramming" is now the focus of intense interest as a potential way to artificially derive embryonic stem cells from readily available adult tissues, such as skin. The method, though, can be slow and inefficient, with most cells failing to be reprogrammed.

Epigenetic marks such as DNA methylation are thought to act like a kind of memory storage for cells, helping cells "remember" their identities by keeping certain genes turned off and others on. If that's true, then reprogramming likely requires those memories to be reset or wiped clean, allowing cells to assume new identities. During the course of their research, the scientists discovered that some epigenetic information, particularly DNA methylation, is especially difficult to expunge, hindering the reprogramming process. They then showed that treating incompletely reprogrammed cells with a drug that temporarily inhibits DNA methylation could greatly increase the efficiency of the process.

"The same genes that are slow to respond to reprogramming are the genes we see hypermethylated early on in development," Mikkelsen said "Improving the low efficiency of the reprogramming process required circumventing this mechanism without disabling it permanently."

Having a map of these mechanisms could help researchers orient themselves in genomic space and develop additional methods to steer cells safely through the entire reprogramming process. Perhaps, like explorers before them, researchers today will also come across new discoveries along the way that will fill in more of the epigenetic maps.

In the Boston Globe: "What the passage of GINA means for the public"
Parts list for a powerhouse