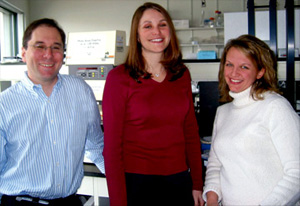 In today's online version of the journal Science, researchers report a surprising find: Despite 99% similarity at the level of DNA sequence between humans and our nearest relative, chimpanzees, the locations of DNA swapping between chromosomes, known as recombination hotspots, are nearly entirely different.

Recombination shapes the patterns of genetic variation in a species. It is the process in which DNA from an individual's father and mother is reshuffled to create new combinations of genes in the child — new combinations on which natural selection can act to shape the evolution of the species. Recently it was discovered that recombination does not occur at random across the human genome, but rather is localized to particular places in the genome called "hotspots."

Because these hotspots are very important to studying genetic disease in humans, the research team set out to compare recombination in the genomes of humans and chimpanzees. They expected that the patterns would be very similar between the species, and that by comparing the DNA it would be possible to identify particular DNA sequences that might explain the localization of recombination to hotspots.

In their paper, which will be published online by the journal Science at the Science Express website February 10, the researchers report several findings.

"We started trying to compare recombination in humans and chimpanzees a couple of years ago, in the hope that better understanding this fundamental mechanism might inform our approach to mapping genes for human diseases," said co-senior author Dr. David Altshuler, director of the Broad's Program in Medical and Population Genetics and associate professor of genetics and of medicine at MGH and HMS. "However, progress was stymied because identifying hotspots was laborious and inefficient."

Fortuitously, Altshuler and Peter Donnelly, a professor of statistics at the University of Oxford, were co-chairing the analysis of the International Haplotype Map project (http://www.hapmap.org/), a public project to map human genetic variation for use in disease research. Donnelly's laboratory had recently developed a statistical method that allowed recombination rates to be studied on a genomic scale. "We shared our ideas at a HapMap conference, and after discussions, teamed up with the Boston group for this study. It ended up being a very close collaboration, with daily contact, even though we were 3,000 miles away," said Donnelly, who is co-senior author on the paper.

Working together, the research team analyzed data collected in Boston with the methods developed in Oxford and was able to identify 18 hotspots in human and three hotspots in chimp. To their surprise, none of the hotspots occurred in the same locations in human and chimp.

"We were quite surprised when we found that the recombination hotspots were almost entirely different," said co-first author Wendy Winckler, a Harvard graduate student in Altshuler's lab at the Broad and at MGH. "We explored the notion that perhaps these weren't really hotspots, but in the end every test we could apply argued that these were in fact the real thing," said co-first author Simon Myers of Oxford.

"The surprising conclusion seems to be that there is probably something other than the DNA sequence, or perhaps in addition to it, that is determining where these hotspots are located," said Altshuler. "Epigenetic factors — biological codes that are layered on top of the DNA — may turn out to be more different in closely related species than the DNA sequence itself."

In addition to the authors described above, included on this study are Broad researchers Stacey Gabriel, Robert Onofrio, Daniel Richter; Gavin McDonald and David Reich of Broad and HMS; Simon Myers and Gilean McVean from University of Oxford; and Ronald Bontrop from the Biomedical Primate Research Centre in the Netherlands.

The research was supported by the National Institutes of Health and Burroughs Wellcome Fund, in addition to institutional support from MGH.

The Broad Institute is a research collaboration of Massachusetts Institute for Technology, Harvard University and affiliated Hospitals and the Whitehead Institute for Biomedical Research, The mission of the Broad is to create tools for genomic medicine, to make them freely available to the scientific community, and to apply these tools to propel the understanding and treatment of disease.

This study is characteristic of work at the Broad in that it required a collaborative scientific approach across multiple institutions in Boston and elsewhere; access to public information generated by genome sequencing of human and chimpanzee, and from the International HapMap project; high-throughput data generated by the Sequencing Platform and Genotyping Platform at the Broad; and was only possible provided innovative computational analysis.