Scientists at Harvard University and the Broad Institute of MIT and Harvard have developed a new class of genome editing tool. This new “base editor” can directly repair the type of single-letter changes in the human genome that account for approximately half of human disease-associated point mutations. These mutations are associated with disorders ranging from genetic blindness to sickle-cell anemia to metabolic disorders to cystic fibrosis.

The research team, led by David Liu, professor of chemistry and chemical biology at Harvard University, core institute member at the Broad Institute, and a Howard Hughes Medical Institute (HHMI) investigator, developed a molecular machine that can convert the DNA base pair A•T to G•C, without cutting the double helix, with high efficiency and virtually no undesired products. The development is an important addition to the growing suite of genome editing tools. 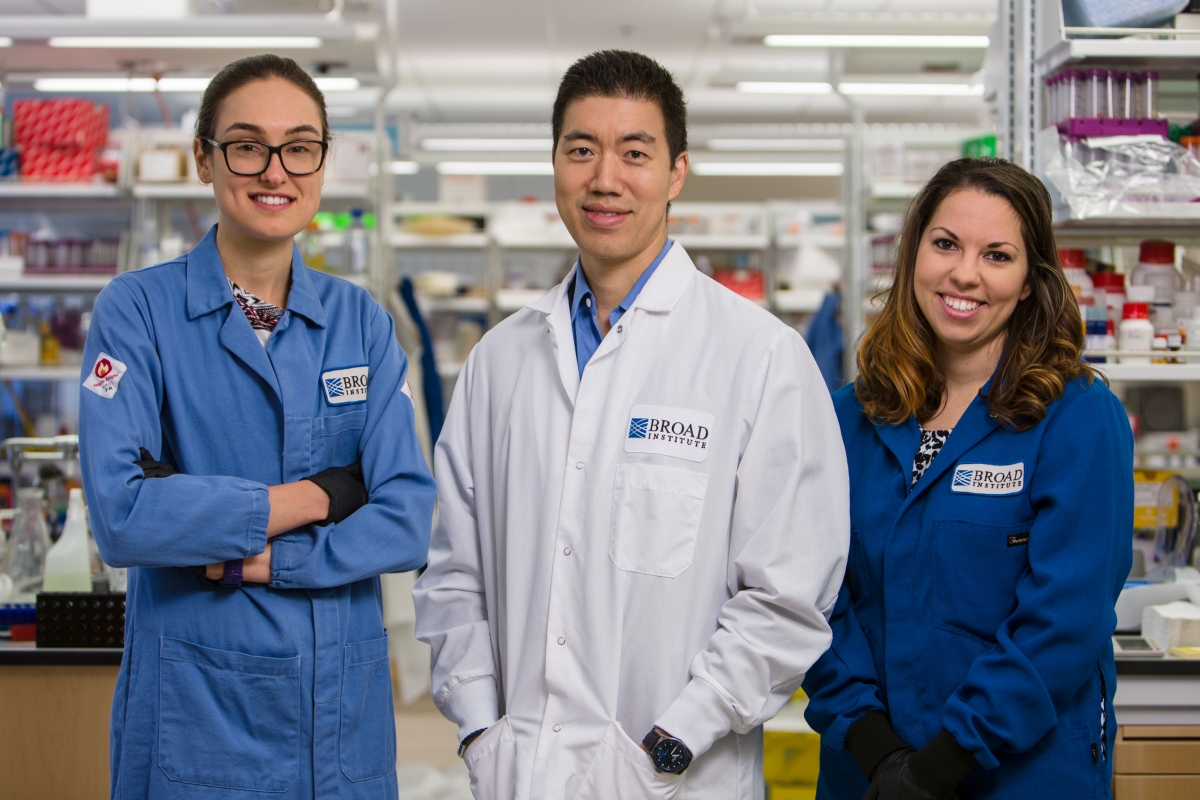 The new system, dubbed Adenine Base Editor, or ABE, can be programmed to target a specific base pair in a genome using a guide RNA and a modified form of CRISPR-Cas9. It works by rearranging the atoms in a target adenine (A) — one of the four bases that make up DNA — to instead resemble guanine (G), and then tricking cells into fixing the other DNA strand to complete the base pair conversion, making the change permanent. As a result, what used to be an A•T base pair becomes a G•C base pair.

Not only is the system very efficient compared with other genome editing techniques for correcting point mutations, but there are virtually no detectable byproducts such as random insertions, deletions, translocations, or other base-to-base conversions.

Making this specific change is important because approximately half of the 32,000 disease-associated point mutations already identified by researchers are a change from G•C to A•T.

“We developed a new base editor — a molecular machine — that in a programmable, irreversible, efficient, and clean manner can correct these mutations in the genome of living cells,” said Liu, who is also the Richard Merkin Professor and Director of the Merkin Institute of Transformative Technologies in Healthcare at the Broad. “When targeted to certain sites in human genomic DNA, this conversion reverses the mutation that is associated with a particular disease.”

ABE joins other base-editing systems pioneered in Liu’s lab, such as BE3 and its improved variant, BE4. Using these base editors, researchers can now correct all the so-called “transition” mutations — C to T, T to C, A to G, or G to A — that together account for almost two-thirds of all disease-causing point mutations, including many that cause serious illnesses for which there are no current treatments. Additional research is needed, Liu notes, to enable ABE to target as much of the genome as possible, as Liu and his students previously achieved through engineering variants of BE3.

Development of the new base editor began when the team began a year-long effort to evolve a new enzyme that could convert adenine into inosine (I), a nucleotide that behaves similarly to G during DNA or RNA synthesis. The project, led by Gaudelli, ultimately resulted in high-performance, seventh-generation ABEs.

“The main challenge for me while developing ABE was overcoming the psychological hurdle of whether or not ABE could go from concept to reality, since the key component of the editor did not exist naturally and had to be evolved in our lab,” said Gaudelli. “It was important to keep the faith that we could not only dream of such a molecular machine, but also build it.”

They also used ABE to install a mutation in human cells that suppresses a disease, recreating the so-called “British mutation” found in healthy individuals who would normally develop blood diseases like sickle cell anemia but instead have a mutation that causes fetal hemoglobin genes to remain active after birth, protecting them from the blood diseases.

While the development of ABE is an exciting step forward in base editing, more work remains before base editing can be used to treat patients with genetic diseases, including tests of safety, efficacy, and side effects.

“Creating a machine that makes the genetic change you need to treat a disease is an important step forward, but it’s only one part of what’s needed to treat a patient,” said Liu. “We still have to deliver that machine, we have to test its safety, we have to assess its beneficial effects in animals and patients and weigh them against any side effects — we need to do many more things.”

“But having the machine is a good start.”

David Liu on the power of single-letter base editing.

Holly Rees explains how the technology opens up a whole new world of possibilities.

Nicole Gaudelli describes the challenge of developing a brand new enzyme for this work.