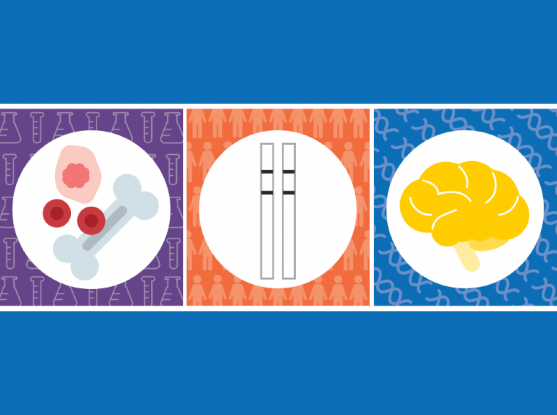 Rapid malaria diagnostics, the complexities of blood development, and inflammation on the brain

Welcome to the September 25, 2020 installment of Research Roundup, a recurring snapshot of recent studies published by scientists at the Broad Institute and their collaborators.

Malaria detection in a jiffy

Efforts to control the spread of, or even eradicate, infectious diseases like malaria depend on finding everyone who is infected, especially those who aren't showing any symptoms. Using the CRISPR-based SHERLOCK system, Rose Lee (Wyss Institute), institute member James Collins of the Infectious Disease and Microbiome Program, and colleagues have developed a point-of-care malaria diagnostic for low-resource settings that can detect the parasite at very low levels (<100 parasites per microliter of blood), differentiate between the four Plasmodium species that infect humans, and return results in less than 60 minutes. Learn more in PNAS and a Wyss Institute news story.

A closer look at hematopoiesis

The hematopoietic system is responsible for producing the adaptive and innate immune systems; red blood cells, which transport oxygen; and megakaryocytes, which generate platelets for blood clotting. Examining the system genomically and at single-cell resolution has further revealed a previously unappreciated degree of diversity. In a Cell review, Alexander Liggett and associate member Vijay Sankaran in the Program in Medical and Population Genetics describe how these recently uncovered complexities are reshaping the field's concept of tissue development and homeostasis while opening a path to a more comprehensive understanding of blood cell formation in the future.